The Pop Up Park located between Morse Court and Elm from Friday afternoon until Sunday evening is a haven for NewCanaanites seeking to relax, perhaps enjoy a peaceful meal or coffee in the warmth of the summer months.

The park is also home to several events for adults and children alike. Such activities as mini golf or events like the 2014 World Cup viewing party add another layer to this already family-friendly site. 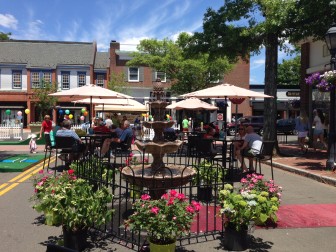 The Pop Up Park on a recent weekend. It’s open Friday evening through Sunday evening, all summer long, on South Avenue between Morse Court and Elm Street. Who remembers the old Sweet Shoppe? Credit: Terry Dinan

The Pop Up Park as it stands right now only pops up during weekends in the summer—a fact that for town resident Cobie Graber opens up the question of whether it should become a permanent fixture in the town center.

“It would be great to permanently set up this area as a town square,” Graber wrote on NewCanaanite.com’s Facebook wall recently.

With that in mind, we set out on a weekday to find out where locals congregate downtown when the Pop Up Park isn’t there, and tried to gauge their interest in a permanent, designated place to do so. Strolling down Elm Street, we found New Canaan residents at popular hangouts such as the leafy patio outside of Starbucks and the shady benches by the New Canaan Playhouse—we may also have gone to the benches outside Baskin-Robbins, The Toy Chest and Candy Nichols, down on Main.

“I love the Pop Up Park,” New Canaan resident Sarah O’Keefe said from a bench outside the movie theater. “My little girls love the mini-golf, the Blue Man and the bubbles.”

The woman sitting next to her, Abby Glover, agreed with O’Keefe that the Pop Up Park is a great place to spend time.“I like the seating so that you can go the restaurants in town that don’t have seating and then sit down in the Pop Up Park and eat,” Glover said. 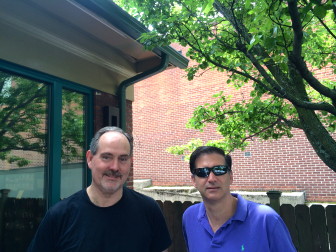 Both women thought the idea of a permanent Pop Up Park is a great one.

One New Canaan resident for 15 years, John Rocco, said he thoroughly enjoys the Pop Up Park and also questioned whether making that very spot a permanent location for it was the best idea.

Rocco said he enjoys spending time relaxing in New Canaan because of the strong sense of community here, especially lined up beside other towns nearby. “Of the comparable towns in the area I think that [New Canaan] has the most town feel. I like the town center and I think it has a great sense of community,” the NewCanaanite said. “I especially enjoy what we—” (here he looked over at a friend) “—are doing right now: Having coffee with a friend who I ran into.”

Rocco also noted that while he has enjoyed the limited time he has spent in the Pop Up Park, he believes a permanent Pop Up Park should be in a location that does not impede the ability to drive through town.