Kimberly Norton remembers the first time she spotted the iconic ‘Slow Down In Our Town’ image in New Canaan—five years ago, just after she’d moved here, in the parking lot at New Canaan Library. 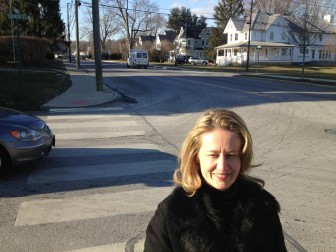 Kimberly Norton of Green Avenue is spearheading an effort to revitalize, in some form, the well-known ‘Slow Down In Our Town’ campaign. Credit: Michael Dinan

Printed in Rams black-and-red and encircling the silhouetted tree of our official town seal, ‘Slow Down In Our Town’ for years has graced street-side signs and bumper magnets throughout New Canaan.

Its message soon struck a chord with Norton, who had lived in New York City for 20 years prior to moving to Green Avenue—accustomed to walking everywhere—and she began noticing how fast people drove here and sought to teach her kids pedestrian safety.

“I heard that we had seven pedestrian accidents last year, and started hearing about people not crossing in the crosswalks,” Norton said. 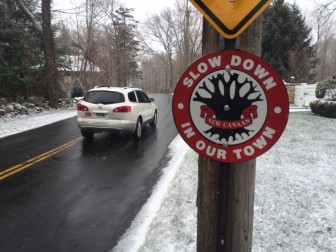 The ‘Slow Down In Our Town’ sign at Ponus Ridge, just above Thurton Drive. Credit: Michael Dinan

After a close call where a motorist nearly struck her husband, a commuter, on his walk to the train station in the morning, Norton sought to educate pedestrians and urge motorists to be more mindful at the wheel. Her research told her that the local woman who had developed ‘Slow Down In Our Town’ moved out of New Canaan years ago.

At the most recent meeting of New Canaan’s Traffic Calming Work Group, Norton broached the idea of re-launching some version of that campaign with police, fire, DPW and emergency management officials—and received a positive response.

Now, she is leading an effort to leverage the recognizable image of ‘Slow Down In Our Town’ to help New Canaan become safer. 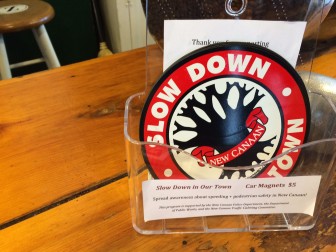 ‘Slow Down In Our Town’ magnets are being sold, presently, at Zumbach’s, Baskin-Robbins and the library. Credit: Michael Dinan

The town has seen a rise in distracted, cellphone-toting motorists and pedestrians alike—in fact, the town’s police chief has called distracted driving “a traffic safety epidemic in New Canaan.” The past year has seen at least four incidents of pedestrians walking into traffic—at the high school drop-off, on South Avenue and two on Park Street.

“The more people hear this message, the more voices, the better,” DiFederico said. “It’s great that it [the campaign] is getting started again, and we look forward to hopefully seeing results from it.”

Norton said she is planning to leverage the ‘Slow Down In Our Town’ campaign’s brand recognition and could build on its message with new products or communications—such as text-messaging.

“We want to keep it very simple for people,” Norton said.

She added: “We are excited about the campaign taking on community education efforts and working closely with New Canaan Police and Public Works to come up with ways to enhance pedestrian safety and driver awareness.”

Asked why the library chose to participate in Norton’s effort, Adult Services Manager Jon Eriksen said: “The library is both a hub for, and strong supporter of, active engagement with our town, and we love that this initiative is actively trying to better our community, making it a safer one.”

To this point, Norton’s effort is entirely self-funded and she’s planning to take the sales from magnets—all funds go into a 501(c)(3) nonprofit fund—to create a baseline budget. So far, 40 magnets have been sold, Norton said, and reactions from around town all have been positive.

Anyone wishing to contribute may contact New Canaan Police, Public Works or Norton herself, at kim.norton@mindspring.com.