The town on Thursday received an application to build a new, 5,425-square-foot home at 42 Hillcrest Road, a 1-acre lot that sold in October for $800,000 with the 1954 Cape that had stood there coming down two months later. 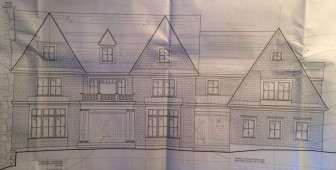 This new 5-bedroom home is planned for 42 Hillcrest Road. Specs by PB Architects of Darien

The new home will include five bedrooms and full bathrooms, two half-baths, and unfinished basement and attic, “bonus rooms” over the garage which are bedrooms, an open patio out back, deck off of the second floor and 3-car garage, according to the application.

The property now is owned by a limited liability company whose principal is a Sunny Isles Beach, Fla. man.

The new home will cost about $850,000 to build, according to the application. The contractor is IT Development Co. LLC of Stamford and architect is PB Architects LLC of Darien.

The New Canaan Building Department last week also received an application to build a 3,100-square-foot home on a vacant 4.19-acre parcel that sold for $550,000 in December.

It will cost about $600,00 to build, according to Jean-Jacques L’Henaff, the owner and contractor.

The architect on the project is Juan Paredes of Westport-based Landtech. 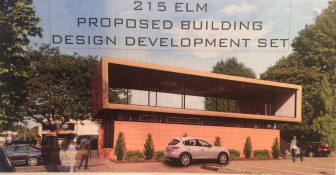 Finally, an application filed April 10 calls for the demolition of an existing drive-up teller at 215 Elm St. and construction of a new, 2-story, 3,011-square-foot building.

The new structure on the .28-acre lot will cost an estimated $675,000 to build, according to the application. It will include 1,388 square feet on the first floor and 1,623 on the second floor, the application said.

The contractor on the project is Moran Construction Management LLC of Easton, with specs by Westport-based Frederick William Hoag Architect.