A new restaurant is planned for a vacant commercial space on Elm Street, documents show. 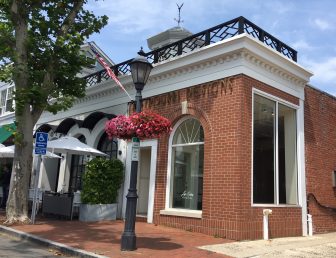 The proposal for the commercial space has received a letter of support from Z Hospitality Group, according to P&Z. The company owns six restaurants, according to its website, including Solé in New Canaan, located next door to the proposed new business.

It’s unclear what type of restaurant is planned. The property’s owner, Donald Hersam Jr., is seeking an exception to section of the New Canaan Zoning Regulations in order to allow the restaurant.

According to a narrative that accompanies Hersam’s application to the Zoning Board of Appeals for a variance, the project requires 20% of the gross floor area of the first floor.

“The requested increase will serve a new restaurant space on the first floor of the building which has no access to any areas for dry food storage, refrigeration or office management,” the application said. “The overall request is for an additional 480 square feet of gross floor area.”

It continued: “The building was constructed in 1925 and has access from both Elm Street and the Town parking lot off Park Street. The first-floor space is 4,595 square feet. The current second floor gross floor area is 664 square feet and made of up an office, entrance way and a large staircase servicing the first-floor space currently occupied by Sole Restaurant. The zoning regulations adopted in 2016 limited second floor construction in the Retail zones to 15%. The site is unique in that the topography on the site not only mandates two means of access, one from Park Street and one from Elm Street, but also that one of the two means of access must have a staircase which utilizes space attributed to the second floor maximum. All other buildings in this block beginning at the Town Playhouse to the corner of Park Street all have fully developed second floor space. .. Thus the 5% incurs proposed by the applicant is far less but consistent with other buildings with the same site characteristics.”

The ZBA is expected to take up the application at its June 6 meeting.

The commercial space had been approved by the Planning & Zoning Commission last June to serve as the new home of Dunkin Donuts.