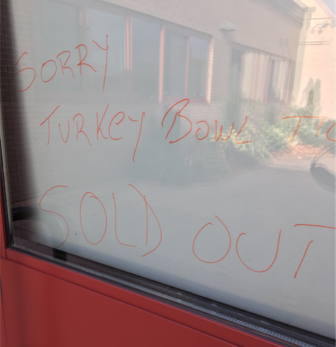 This sign greeted would-be purchasers of Turkey Bowl tickets on Nov. 14, 2016 at NCHS. The big game sold out in 37 minutes. MM photo

Officials landed on that 60-40 split because the Rams are hosting this year’s Turkey Bowl at Dunning Stadium. Individual students and football families were allowed to purchase tickets in advance, Egan said.

The 4,700 total tickets sold will accommodate fans who will fill not only Dunning’s regular stands but also 1,000-plus extra seats and an estimated 1,000 in standing room, he said.

Officials had planned to sell the tickets over three days. This year marked the first time that no game-day tickets would be available.

In the past, the two rival teams have met on Thanksgiving for the FCIAC championship—a game the conference has since done away with. This year, the Rams and Blue Wave both are undefeated, but the large venue that’s been available before—the 10,000 capacity Boyle Stadium, home of the Stamford High School Black Knights—will host the Stamford-Westhill rival game.

“Last year no issue there was no issue because Stamford [High School] was away, and the year before that, they played their game on Wednesday night, which they had wanted to do for a while,” Egan told NewCanaanite.com. “But it didn’t work out for them from a security perspective—so we could not ask them to play their game again on Wednesday night, because that’s really not safe for anybody—and this is not the FCIAC championship game anymore. So it technically is another regular season game for New Canaan and Darien.”

Officials had looked at both Sacred Heart and Fairfield Universities, Egan said, but in truth the capacity at those venues at some 5,000-plus isn’t much larger than Dunning.

For the past two years, the Blue Wave has captured the coveted Turkey Bowl crown, winning the FCIAC championship in the process.

3 thoughts on “Officials: Turkey Bowl Tickets Sell Out in 37 Minutes”