Police say a dog found roaming in New Canaan earlier this month has been reunited with its owner one year after the animal went missing. 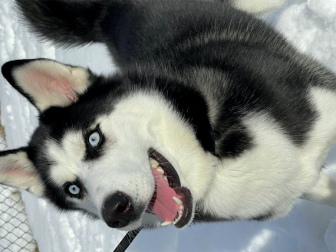 The husky while in the care of police after a New Canaan couple rescued him Feb. 6, 2021. He was found running in and out of traffic on White Oak Shade Road. Image courtesy of New Canaan Police Department

The young male husky found Feb. 6 on White Oak Shade Road is back with his owner in Windsor after that individual presented photos and paper work to authorities, according to Officer Allyson Halm, head of the New Canaan Police Department Animal Control section.

The photos presented to police showed a “very, very distinctive” mark in the shape of a fleur-de-lis on the husky’s forehead, and he “almost collapsed” in his owner’s arms when the pair was reunited at Stamford Animal Control, she said.

“I saw the dog just melt in her arms,” Halm said.

The husky had been rescued by a New Canaan couple on the Saturday of Super Bowl weekend, just as a snow storm was bearing down on the area, Halm said.

“He was in and out of traffic, they [the couple] said he was frantic and they used their New Canaan Chicken wings that they’d bought for the Super Bowl” to lure the dog to their vehicle, Halm said.

Halm came in to New Canaan’s animal shelter that Sunday to “havoc,”  she said, as a group of puppies that had been seized from a Butler Lane home in a neglect case also were in the small building at the dump.

The puppies were “wound up” around the un-neutered husky, who was “a handful,” she said.

“I tried to take him out for a walk and at that point it was snowing and with the ice, I almost went flying,” Halm said.

Ultimately, Stamford’s animal shelter was able to keep the dog while authorities looked for an owner. A Facebook post from the city’s Animal Control section drew a few false leads before the real owner contacted Halm and New Canaan Police.

He’d gotten out of his owner’s home last March, Halm said, citing information supplied by the husky’s family. The dog ran across a set of railroad tracks and they hadn’t seen him since, she said. It’s likely that the dog had been taken in by someone for a time.

“He was clean and healthy when we found him,” Halm said. “He had his weight. There was nothing wrong with him. I think he was found near the rest stop on the Merritt Parkway, near Gerdes and White Oak Shade, so I think whoever had been caring for him over the last several months decided they couldn’t care for him and they dumped him.”