The owner of a Darien dog on whom New Canaan’s animal control officer put a restraining order after the German Shepherd bit a woman in Waveny is appealing the order, officials say. 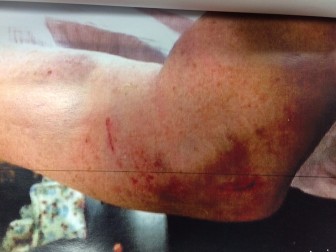 The upper arm of the woman who suffered the dog attack at Waveny in June 2014, leading to a restraining order put on the animal. Photo courtesy of the New Canaan Police Department

The bite occurred last June, when on a back trail of the public park, a the dog lunged at, latched onto and tore open a New Canaan woman’s arm as she walked past, according to a police report.

Under the terms of a restraining order immediately put into place, the dog is required to wear a muzzle whenever it’s off-property, to be leashed with nothing longer than a 6-foot leash and to stay at least 10 feet away from humans, according to Officer Maryann Kleinschmitt.

In addition, the dog—seven months old at the time of the attack—is required to stay in the state, Kleinschmitt said. The victim suffered 3-inch tears on her upper arm and forearm, as well as abrasions and bruises, police have said.

The dog’s owner, a Darien man (though during the attack, the animal was with a woman), has appealed the restraining order and state officials will hear his reasons at a hearing on May 27, Kleinschmitt said.

The man said the terms of the restraining order are excessive, Kleinschmitt said.

The shepherd had been a visitor to Spencer’s Run, the dog park at Waveny, but the owner’s PIN number to enter the fenced area has been removed, Kleinschmitt said.

Following the attack, the animal was ordered to undergo a 14-day required quarantine at Davis Animal Hospital, Kleinschmitt said.

It isn’t clear whether the dog is the same German Shepherd that lunged at and bit a woman near Spencer’s Run about one week before the incident last summer—a case where the woman in charge of the attacking animal reportedly walked away.