Police say residents in the area of Jelliff Mill and also Gerdes Road spotted bobcats in their neighborhoods this past weekend. 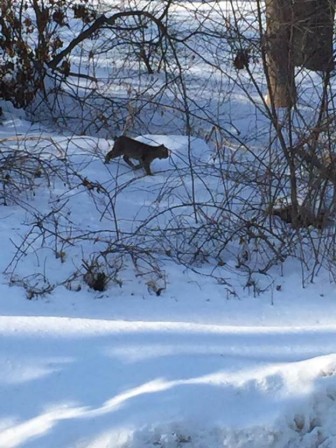 Photo of a bobcat sighted in the Jelliff Mill area on the weekend of Feb. 14-15. Photo courtesy of the New Canaan Police Department’s Animal Control Unit

Animal Control Officer Maryann Kleinschmitt said she believes the separate sightings are of the same animal.

The bobcat’s appearance follows sightings of adult bobcats in northern New Canaan last summer and a kitten in September—though until now, no one had been able to photograph the elusive wildcat.

“I am excited we now have a picture,” Kleinschmitt said.

Last summer, a kitten was sited on Deep Valley Road in the last week of August, and then two weeks later, three adult bobcat sightings were reported on upper Smith Ridge Road.

Kleinschmitt said  New Canaan has had two different sightings in the Lukes Wood Road area in the last three years, and prior to this weekend, just twice in five years has anyone been able to photograph a bobcat in town, she said.

The animals rarely cause problems for humans, officials say, though they may sometimes prey on smaller animals such as shrews, as well as rabbits, raccoons and deer.