Officials called to the Laurel Reservoir early Thursday on a report of a deer stuck on the ice came upon an unusual and rather gruesome scene: Two adult bald eagles picking at the dead mammal, it’s entrails spilled on the frozen water. 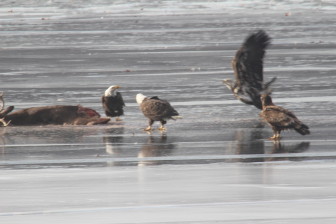 A resident reported that the deer was alive as of early morning—the animal rescue call came in at 7:39 a.m.—and both New Canaan firefighters and NCPD Animal Control officials responded “as quickly as we could,” Officer Allyson Halm said. 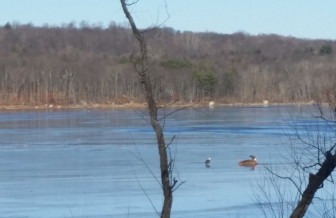 A pair of adult bald eagles scavenge the carcass of a deer at Laurel Reservoir in New Canaan on Feb. 18, 2016. The deer had been reported alive and struggling earlier in the morning. Photo used with permission from its owner

“It was already deceased” by the time they arrived at the reservoir off of upper Ponus Ridge, she said, “and the eagles were already having breakfast.”

According to Halm, a passerby who lives in the neighborhood told officials that the two eagles live in the area.

A species unique to North America—the reason it was selected in 1782 by the Second Continental Congress as the national emblem—bald eagles mainly eat fish though they’ll also scavenge any edible mammal, according to the Connecticut Department of Energy and Environmental Protection.

The Laurel Reservoir in New Canaan was created in 1923 to ensure Stamford’s water supply. Beneath the reservoir lie the remains of a once-vibrant village in the 18th and 19th centuries, built around a bustling local industry of oak-spun baskets used by oystermen. The foundations of some structures that made up ‘Dantown’—so named for the Dan family of New Canaan, who also give their name to nearby Dan’s Highway—are still visible at low water levels.

Fire Chief Jack Hennessey said he has come to understand that deer are unable to walk on ice and often simply lay down on it or try to move off as though they’re swimming.