Adam Biren had been living in his house on the Noroton River in southwestern New Canaan for about five years when he saw an animal along the water that looked like a small dog with a long tail. 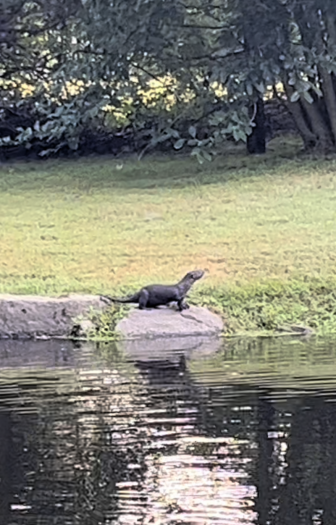 It was this past summer when the family of five river otters first showed up.

The animals swim around fishing in the river, run along the side of the waterway, “frequently jumping out and getting back in,” Biren said.

“My three kids love watching the otters and run to our back windows to observe whenever they make an appearance,” he said.

Though most residents of Connecticut rarely see wild river otters because the species avoids contact with humans “the state’s river otter population is healthy and stable,” according to the Department of Energy and Environmental Protection. 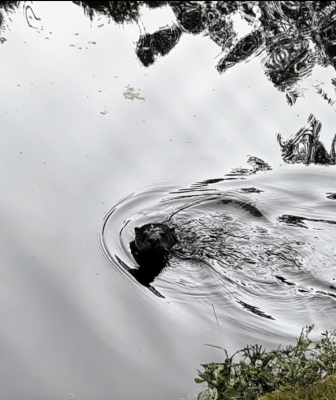 “Otters are active all year and they are generally nocturnal or crepuscular (active at dawn or dusk), although diurnal activity is not uncommon,” according to the DEEP. “Being quite sociable, otters are often observed in family groups in summer and early fall. Otters ‘play’ more than most wild animals—wrestling, chasing other otters, tossing and diving for rocks, toying with live prey, and, occasionally, sliding. They usually will make a slide down a stream bed directly into the water, using this slide over and over. Otters also have been seen dropping a pebble in the water, swimming underneath it, and catching it on their forehead.”

New Canaan Animal Control Officer Allyson Halm said Biren’s photos of the otters out back are the first that she’s ever seen, though “I know they’re here.”

“It’s a good sign for our ecosystem and how healthy they are,” Halm said.

Biren said he’s seen bobcats on his property as well, raising concerns because the family is protective of the otters.

The otters themselves eat fish, frogs, crayfish, shellfish, snakes, turtles, salamanders, earthworms and small birds and mammals, according to the state.

Ranging through parts of Canada, the Northwest, upper Great Lakes area, New England, and Atlantic and Gulf Coast states, otters range over a wide area, as much as 50 miles, according to the state. 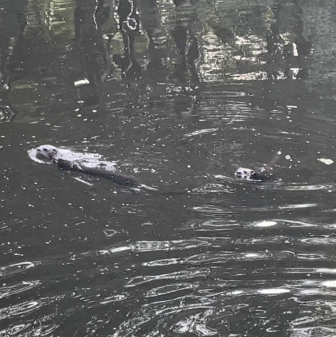 “It may take two weeks to a month for an otter to cover its territory,” the DEEP said. “An otter rarely stays in one place for more than a few days.”

They start to breed at about two years of age, the DEEP said. The mating season begins in early spring and the young are born 10 to 12 months later.

“The nesting den is usually an abandoned bank burrow of a muskrat or beaver; however, a hollow at the base of a tree or a hollow log also may be used,” according to the state. “The chamber is lined with shredded bark and grasses. The litter may number from one to five but normally consists of two or three pups. At birth, the young have black fur and are blind, toothless, helpless, and about the size of a kitten. Their eyes open about a month later. Otter pups grow quickly and leave the den at 2 months of age. The young are cared for by the female and they remain with her for almost a year until the next litter is due.”