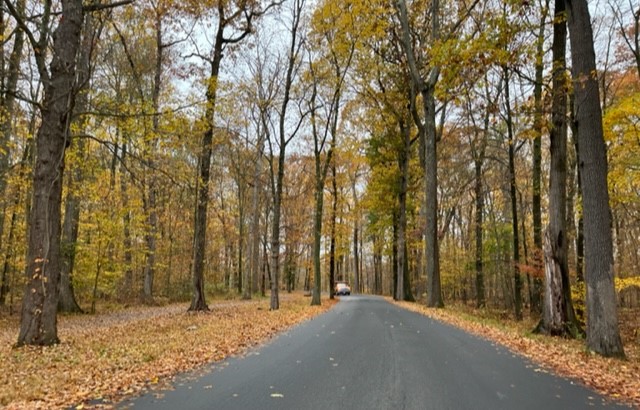 Inside the South Avenue entrance to Waveny on Nov. 1, 2022. Credit: Michael Dinan

Town officials this week approved an approximately $168,000 contract with a Bedford Hills, N.Y.-based company to beautify parts of Waveny Park, including much of the entrance drive from South Avenue.

The work will include plantings on either side of the main road through Waveny from that entrance to the four-way at the base of the hill, as well as part of the area around the Lapham Road entrance, according to Public Works Director Tiger Mann.

“Right now you drive in and it’s just whatever was either planted long ago or was basically a volunteer that came up and was able to seed and grow at that time,” Mann told the Board of Selectmen at its regular meeting, held Monday at Town Hall and via videoconference.

“This is basically to fill in all those gaps and make the entrance drive give it some color during the year and some character throughout the year,” Mann continued. “We think it’s a worthy project and for the Waveny Park Conservancy it was one of their top-five [projects] going forward in their master plan for what they wanted to see for Waveny itself.”

First Selectman Kevin Moynihan and Selectmen Kathleen Corbet and Nick Williams voted 3-0 in favor of the $167,887.50 contract with Nick Cambareri Masonry and Landscape.

Mann said that Cambareri was very responsive to the town’s bid request and that the company had already done work in Waveny, including a new trail that went in six years ago—the Conservancy’s first major project in the town park. The nonprofit organization is paying for the beautification work, Mann said.

The selectmen asked whether the project has already gone to the Parks & Recreation Commission for approval (yes), whether it will go to the Town Council (it could but it doesn’t need to since there’s no change to the land or adding an amenity that the town would need to maintain), what is the timing of the project (next couple of weeks), where the plants are coming from (not sure) and whether Cambareri did the restoration work on the bridge headwalls (no that was Peter Lanni).

There appeared to be some confusion during the meeting as to whether the town would help fund the beautification project.

When Mann said the costs could be shared between the town and Conservancy, Moynihan responded, “I’m confused by that, Tiger. I thought this was all Conservancy.”

Mann said, “I wrote it as ‘shared’ just to make sure to have the discussion. But our feeling at present is that it would be driven completely by the Conservancy. And they are willing to spend the entire amount for the beautification.”

Williams said, “Which is incredibly generous.”