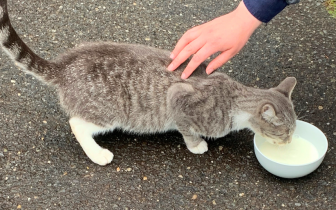 The cat, who may have been abandoned, first came to the attention of authorities June 21, when a Summer Street father and son concerned about the animal’s welfare tried to put her in a carrier and got bit, according to Officer Allyson Halm, head of the New Canaan Police Department’s Animal Control section.

While the father and son underwent a series of rabies vaccines as a precaution, police tried to catch the cat and bring her into the town’s animal shelter for a period of quarantine, Halm said.

That didn’t work, she said. The cat has since been living outdoors in the neighborhood of Cross Street and appears to be about one month pregnant, halfway through its pregnancy, Halm said.

Starting last week, under Halm’s instruction, residents of Cross Street have left an un-triggered trap out for the cat, putting food into it and hoping to accustom the animal to entering it. Halm said she’s hoping to make the trap ready for capture so that the feline can be housed comfortably at the shelter and ultimately transferred to an animal welfare agency to take “sooner than later.”

“Because we cannot accommodate a pregnant mom [at the shelter] and most welfare agencies can,” Halm said.

The cat is “friendly but leery,” Halm said, and outlasted the recent heavy rainfall in New Canaan by curling up “under porches and things like that, so she’s not going anywhere.”

A search of Animal Control logs showed that a cat fitting this one’s description was reported as a stray on Cross Street back in March, Halm said.

Though Animal Control does not get involved with healthy stray cats, the agency does try to intervene when cats are in need of help, such as during a pregnancy. She said the episode is, in part, a reminder to residents to not feed nor try to corral stray cats.