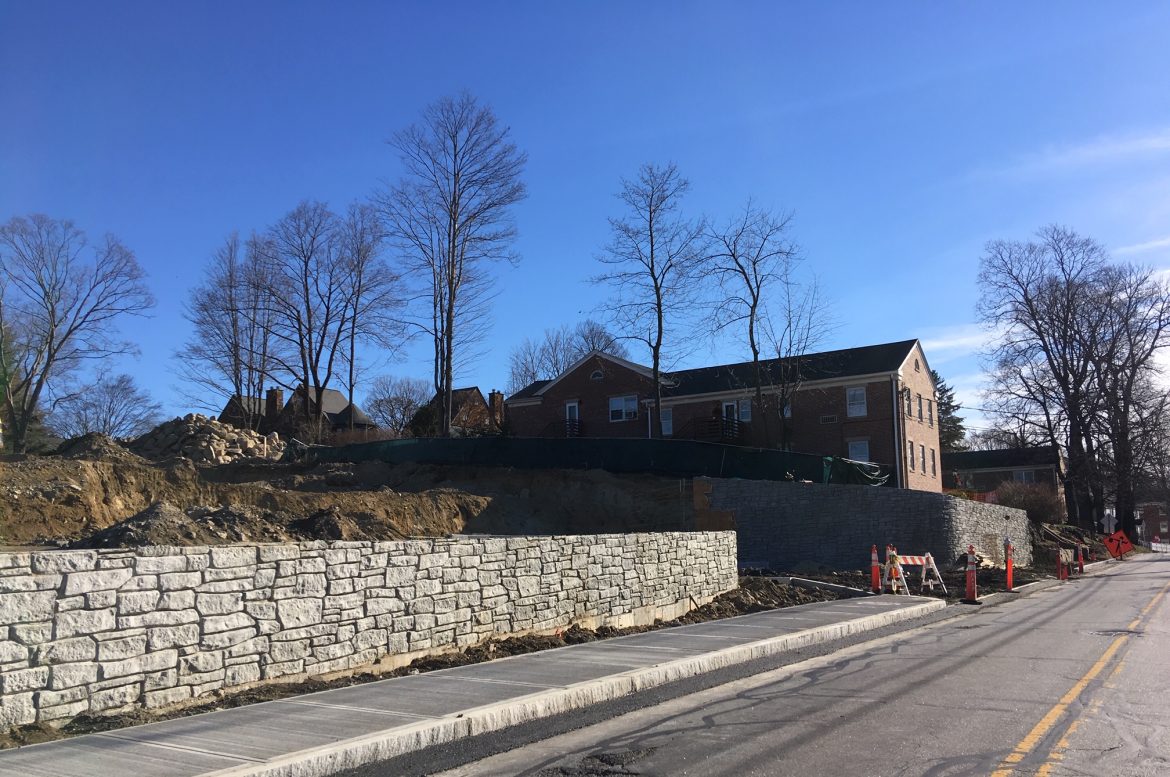 Saying a local builder has been slow to address concerns regarding a widely discussed retaining wall that’s taking shape at the edge of downtown New Canaan, officials on Tuesday night called for the town attorney to issue an opinion on whether building permits for a major project can be withheld. 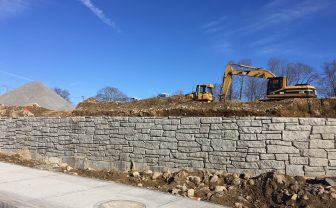 Merritt Village developer Arnold Karp has not responded to the Planning & Zoning Commission’s assertion that a faux stone retaining wall appearing above Park Street will not be sufficiently screened by landscaping and therefore must get a fieldstone veneer, members of the appointed body said during their regular meeting.

“There are still permits to be issued, and I think at a minimum, we have to make sure” that Karp adheres to what P&Z approved for the 110-unit project, Commission Chairman John Goodwin said at the meeting, held in Town Hall.

He added that Town Attorney Ira Bloom already has been apprised of the situation and “I think we should have further discussions with attorney Bloom as to what our recourse is here, because I for one am extremely unhappy about this.” 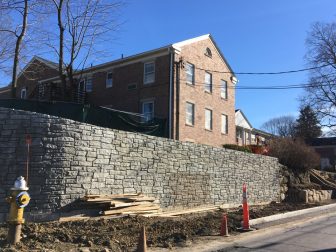 “We all know the visibility of this project,” Goodwin said. “I think this entire Commission is unhappy with what is going on right now. We approved a project and that project has changed. That is unfortunate and I am very disappointed.”

The comments came during an administrative summary report from the town planner. Merritt Village was not on the meeting agenda as such, and Karp was not in attendance. He and Karp Associates COO Paul Stone had appeared before P&Z in October to address concerns about the retaining walls, saying they will be capped and partially hidden by plantings, and that the buildings themselves—which feature natural stone and cedar shingles—will be the focal point for passersby.

“I have to get a little more of the project on down the line before I have 18,000 architects who live in town telling me how it is going to look,” Karp said during the Oct. 31 P&Z meeting.

Ultimately, P&Z decide this week to dedicate resources to pore over the thousands of pages that constitute Merritt Village’s multiple sets of plans in order to determine whether the retaining wall violates a specific piece of the Commission’s approval, as well as to consult with Bloom and figure out how to preempt similar problems in the future.

Commissioner Kent Turner said, “We need to look at our conditions in the future and develop something that is legally very, very tight that if at any time in the construction process the plans or specs are not followed, or something to the effect that the design intent is not being accomplished, that the town has the right to a cease-and-desist order type action for the building permit. We need something with some meat on it, some strength, that we can control these things and not have it go on and go on.”

It wasn’t immediately clear whether P&Z is in a position now to force Karp to cap the faux stone wall with fieldstone.

According to Town Planner Lynn Brooks Avni—the fourth person to hold the position since Karp filed his application for Merritt Village, a complicating factor—P&Z approved two sets of site plans and Special Permits for the project in both 2016 and then, on a modified basis, in 2017. Though P&Z’s reluctant approval of Merritt Village included a record-high number of conditions, “there is no condition that specifically directs them to build the wall a specific way or with a specific material,” Brooks Avni said.

Even so, Bloom has advised that if terms such as “no stone wall’ or “stone veneer” appeared in approved plans, then the Commission “could kind of hold them to that.”

Goodwin said Brooks Avni should advise whether assistance from members of the Commission or even outside help would be needed to determine whether such a notation exists.

Asked whether Karp had responded to the Commission’s recent letter regarding the faux stone walls, Brooks Avni said that although the developer said he would respond, he hasn’t done so yet.

Commissioner Dan Radman said that a second, taller retaining wall that has appeared recently at the Merritt Village site above Park Street appears to be higher than what’s allowed under the New Canaan Zoning Regulations.

Noting that two permits have been issued—one for the demolition of the apartment buildings that had stood where Merritt Village is to be constructed, and a second for the driveways and retaining walls—Radman asked whether a third permit for constructing the complex itself could be withheld until Karp addresses the issue of the retaining walls.

“The disconnect and what worries me most is what Arnold and Paul represented when they were here two months ago, which was that our building permit was submitted with faux stone as part of the” approved application,” Radman said. He said that he and the town planer have looked at specific plans and that “they don’t call out ‘fieldstone,’ but they are drawn as if they are going to receive fieldstone.”

“But they do not anywhere reference ‘faux concrete stone’ which is something they said during their presentation, which is, ‘Oh no, it was always that—that is what we submitted and got a permit for.’ It’s not in there.”

Other Commissioners voiced concerns about a sidewalk that has been built flush against the bottom of the main retaining wall, and would appear to prevent any landscaping from screening it.

“What is next?” P&Z Commissioner Kent Turner said. “If this is something that is starting to happen, are we going to have the same problems with materials on the building? The landscaping?”