Peter Ogilvie first noticed the activity at Canoe Hill Cemetery in the months after the COVID-19 pandemic set in last year, in driving by it on Laurel Road each day. 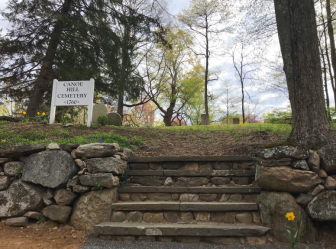 Perched on a hill off of the east side of Laurel not far from the intersection of Canoe Hill Road, the final resting place of 200-plus New Canaanites—including the town’s (and possibly Connecticut’s) last living slave, Onesimus Comstock—had fallen into disrepair. With little dedicated parking and difficult to access even by foot, given a steep hill and crumbling stone staircase, the .69-acre burial ground was largely covered in weeds and fallen branches, with broken and illegible gravestones scattered about. 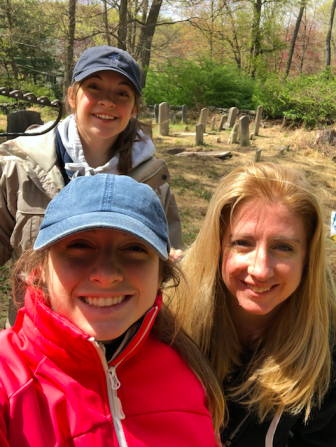 Kristen Pace (R) with two of her daughters, Kayleigh and Ashlyn. The family took up a pandemic project in restoring the Canoe Hill Cemetery. Contributed

One day, Ogilvie pulled over to see what was happening in the cemetery, and there met Kristen Pace and her daughters, busy at work.

“She took on this project all by herself and in the middle of the pandemic, in the middle of quarantining, and with her daughters out there, did the physical work of cutting down weeds and cleaning up just unbelievable truckloads of crap,” Ogilvie said.

“Then started to dig up sunken gravestones that were under six and 12 inches of dirt, and she and her daughters identified and mapped out the gravestones themselves—they’re online—so it became an IT project, as well,” he added. 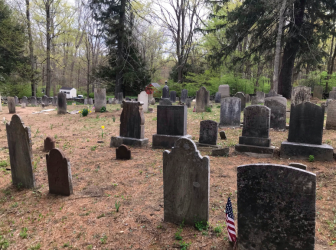 Flags are planted by the gravestones of those who served in the U.S. Armed Forces. Daffodils have sprung up throughout the cemetery grounds. Credit: Michael Dinan

After the Pace family launched the project, northeastern New Canaan resident Chris Schipper—known to many for his involvement with the New Canaan Land Trust, Conservation Commission and Friends of Bristow Bird Sanctuary—also caught wind of what they were doing and pitched in. Soon, Public Works Director Tiger Mann became involved and offered the town’s help with some of the heavier work, such as hauling.

New Canaan Tree Warden Bob Horan identified trees that were dead and needed to be removed, and the town hired professionals to repair some of the broken gravestones, create solid stone steps and spruce up the driveway. 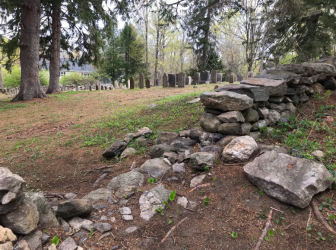 A break in the stone wall connects a small part of Canoe Hill Cemetery with the larger, main section. Credit: Michael Dinan

Asked about Pace and the project, Mann said, “She has been a driving force and the place looks awesome.”

“On her own she just called me and said can you help, and I was like absolutely,” Mann said.

Pace also launched a neighborhood campaign to raise money for a town Special Projects Fund dedicated to the cemetery’s restoration and upkeep, and quickly received thousands of dollars in donations for the cause, Mann said. 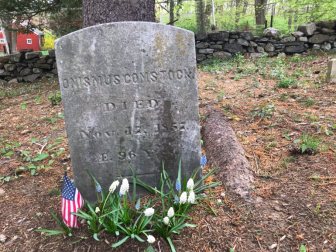 Schipper said the restoration project has made a difference.

“I think part of it is that there is a certain sadness when you see a cemetery that is in a pretty decrepit state, but you know it’s full of history and remarkable stories of people who have just been forgotten, and this was an attempt to honor all those early residents of New Canaan,” he said.