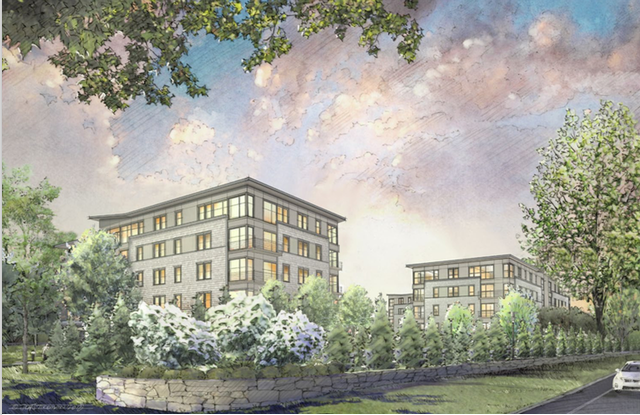 A widely anticipated rebuilding project at Route 123 and Lakeview Avenue will start mid-September, according to those overseeing it.

Tax credit financing through Connecticut Housing Finance Authority, as well as a Federal Housing Authority-approved loan and private bank backstopped by HUD have come through for the estimated $45 million Canaan Parish project, according to Scott Hobbs, chairman of the New Canaan Housing Authority.

The volunteer agency is partnering with New Canaan Neighborhoods Inc. to rebuild Canaan Parish, a 60-unit Section 8 housing complex at New Norwalk Road and Lakeview Avenue, in a single five-story structure and to construct a new, 40-unit structure of the same height. Both buildings would count toward the state’s affordable housing requirement.

Asked what’s the big message for locals as construction gets underway, Hobbs said, “I think that you are going to start seeing the fruition of a lot of work from a lot of people and great support from the community and town officials in creating what will be a world-class affordable housing complex. We believe that we have very architecturally interesting buildings that will serve the residents and community well for the next generation.”

Unanimously approved in August 2018 by the Planning & Zoning Commission, the project has been described as creating more energy-efficient buildings with green space around them and in a combination of different-sized units. P&Z approved the project following weeks of discussion about early-stage renderings, but the project’s viability became uncertain last spring as hoped-for state funding fell through. A few months later, an FHA loan plan materialized.

Residents from about six units soon will move to Millport Apartments so that demolition of about one-third of the current Canaan Parish buildings can start. The other units will remain occupied during the first phase of construction, which will take about one year. At that point, everyone will move into the new building so that the rest of the original Canaan Parish can be demolished and the second phase of construction can begin. It also will last about one year, Hobbs said.