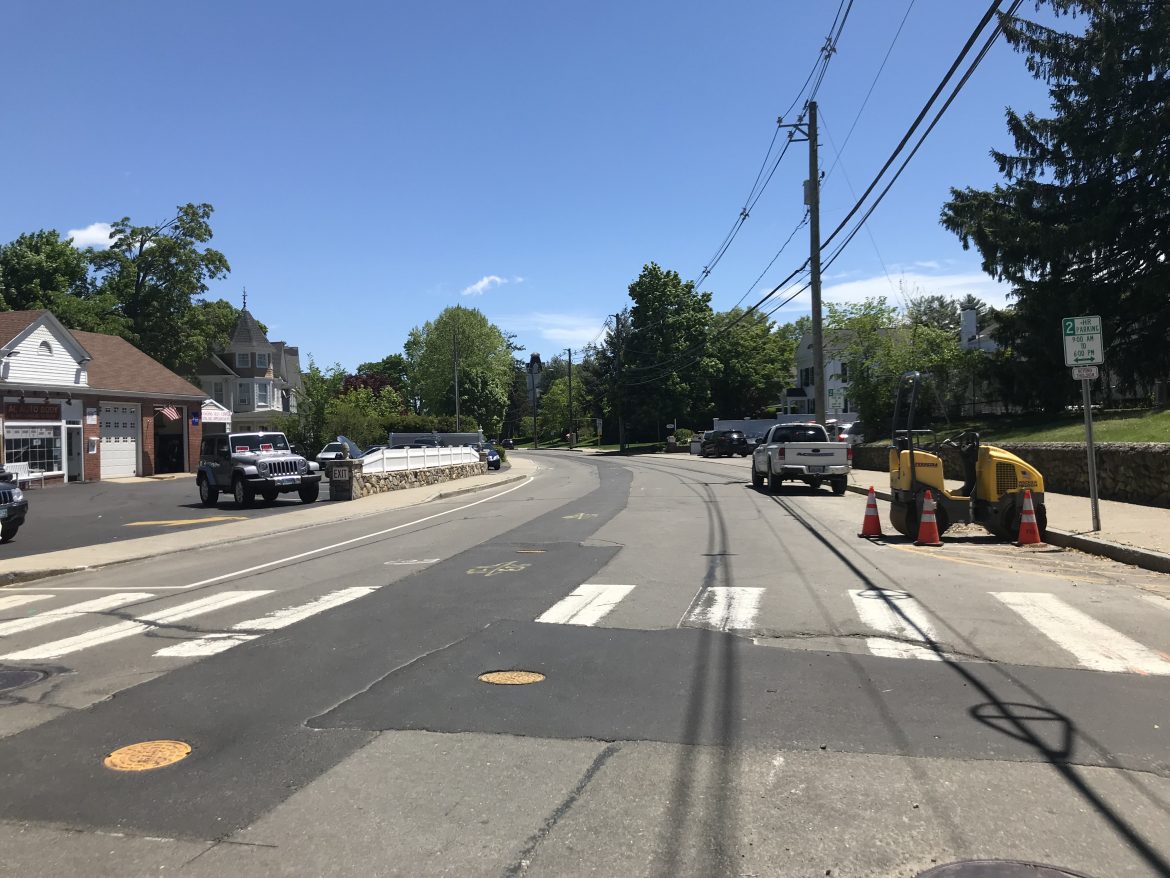 Burns Construction is set to temporarily restore the paving around the trench line on Main Street starting this week. Credit: Olivia Flaherty-Lovy

Following complaints about the condition of local roads during the natural gas installation, town officials said Tuesday that a new contractor has be hired to start this week.

The utility company overseeing the project is “very much aware of our dissatisfaction,” according to Public Works Director Tiger Mann.

“The present contractor [Ferreira] is being asked to vacate the premises, and the new contractor will commence on the main installation services and restoration next week,” Mann said during a regular Board of Selectmen meeting, held at Town Hall.

Since Ferreira, a contractor for Eversource, began patching New Canaan roads in the wake of the gas main installation, residents have been complaining about the quality of the repairs.

“We’ve set some very hard expectations to the contractor coming in as to what we expect and what our residents expect,” Mann said.

According to Mann, the road restoration project is slightly behind schedule, but a second construction team has been hired and has been given express permission to work on Saturdays from 8 a.m. to 4 p.m.

New Canaan is in the second year of a three-year initial installation phase. Roads that are dug up for the project will be completely repaved three years from the time of the installation, Mann told NewCanaanite.com in a recent podcast.

In the meantime, improved restoration work is to be completed by the end of May, he said at the meeting.

To prepare for the annual Memorial Day Parade, Burns Construction has agreed to perform a temporary restoration of the trench for the natural gas line on Main Street starting Thursday or Friday of this week, Mann said. He also said that meanwhile, Public Works has been repairing potholes from the Fire Department down along the parade route.

Mann said that the change in contractor is “a very big step” in the right direction.

Selectman Kit Devereaux thanked Mann for his hard work in making New Canaan roads “beautiful” in the past, and noted that he’s had to watch them “desecrated” by the contractor.

Mann said, “It’s very difficult to have to see 14 years of work dissipate and then have to deal with the fallout, but if the residents will be patient through the process, in the end the product will be much better than what we imagined. There will be better gas service for the residents, savings for our town buildings, and a rejuvenated road system so it’s all going to be for the greater good.”

One thought on “Roadworks Contractor Replaced After Town Voices Frustration”