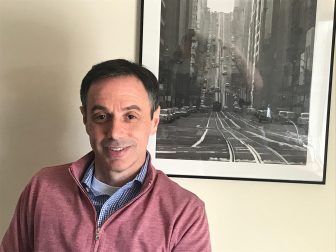 Citing a petition that has garnered more than 1,800 signatures calling for Mike Handler’s reinstatement, Devereaux during a regular meeting of the Board of Selectmen said he’s owed “a huge ‘thank you’ for the years of service that he volunteered to our community.”

“Mike’s was a voice we heard over the years during times of emergency and he diligently and clearly and eloquently kept us informed and calm,” Devereaux said during the meeting, held via videoconference. “In my opinion, New Canaan should be celebrating the years of volunteer work that Mike gifted our town and for his dedication to our wellbeing. And whatever the misunderstanding that caused this event, it should not keep the town from acknowledging MH’s long and effective volunteer service to the community. I don’t think he has been thanked.”

The comments came during a general discussion of matters before the town.

Moynihan referred to a statement he issued June 3 after news that he’d asked for Handler’s resignation leaked. It ended with, “We certainly appreciate Mike’s past service and wish him well.”

Weeks later, it remains unclear why Moynihan asked him to resign, though the first selectman has referred to an issue of “respect” and Handler’s own behavior. Handler called the first selectman’s allegations—that Handler’s own “conduct” had brought on the request for his resignation, that there was an issue of “respect” and that complaints regarding Handler had come in for an extended period of time, from health officials and others—“hurtful and baseless” lies.

Longtime colleagues of Handler with the Office of Emergency Management have called him professional and respectful.

Williams spoke publicly about Handler’s ouster for the first time, calling him “a great asset to the town of New Canaan” who “has been an outstanding director of emergency management.”

“The use of Facebook during storms to convey and collect pertinent real-time safety information is just one example of his wisdom and his innovative spirit,” Williams said.

He added, “Yes, I am uncomfortable with the circumstances surrounding Mike’s resignation, as many of us are. Our first selectman is on the record as saying it wasn’t policy differences but rather other interpersonal issues that prompted the decision. Having spoken to both individuals on multiple occasions, I believe that to be the case.”