Just as New Canaan High School administrators renew a “geo fence” that prevents the use on campus of Yik Yak—a smartphone app that some students last year used to post derogatory and often graphic comments about others, anonymously—a new mobile platform has emerged that offers all of that plus photos. 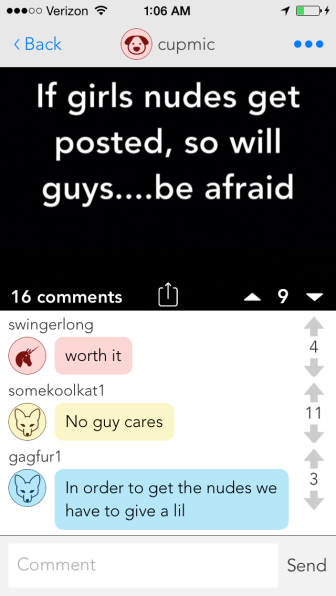 So many NCHS students have been using “Streetchat” this week to attack classmates, administrators and parents—all against the company’s own terms, their identities in no way protected should law enforcement seek to investigate— that the company late Monday issued this statement through the app itself:

“New Canaan High School, at this rate, Streetchat’s going to be prohibited at your school shortly. Here’s a few ways to make sure Streetchat doesn’t get blocked at your school. Do NOT insult faculty and staff. Do NOT target each other personally. Use Streetchat responsibly—this is a place to be funny, not to be a jerk. Have fun!”

The app—described by its creators as a “live photoboard for schools and colleges”—streams a feed of images overlaid with text for a specific institution, as well as comments. Anonymous posters in New Canaan High School’s feed, as word spread late Monday that parents had learned of the app and were watching the stream, discussed the prospect of a ban and some suggested different feeds that NCHS kids could jump to should the company make good on its threat and pull down the New Canaan feed. 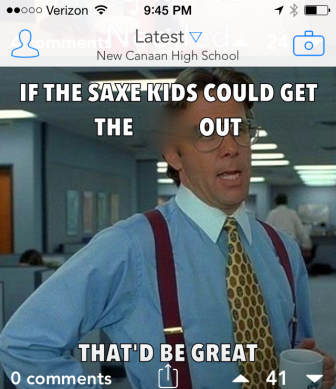 The emergence of Streetchat—quick, free, downloadable, immediate, photo-friendly, mobile and anonymous—illustrates well the challenge of tackling a problem whose solution, district officials say, requires involvement not just from the school but the community at large.

With Streetchat—and with whatever new app takes its place, regardless of its “terms of use”—students find a welcome platform to post hurtful comments on memes and actual photos of high school students, to threaten to post nude pictures (usually of girls), to threaten and deride freshmen and to attack the high school’s principal and other administrators, including in comments threads that also offer a veil of anonymity since user accounts are tied to screen handles with no identity verification. 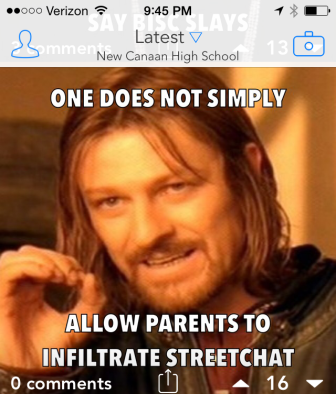 “The cyberbullying, anything that goes on online, any kind of meanness or harassment or anything that goes on online, can be very difficult for a school district to work through,” Dr. Bryan Luizzi, acting superintendent of New Canaan Public Schools, told NewCanaanite.com. “Because it often happens between two individuals or it can happen in a place that allows the person who is posting the mean or otherwise inappropriate post to do so anonymously. So it can create a difficult environment.”

The district’s approach to addressing cyberbullying through apps such as Streetchat can be described as a combination of reactive and proactive.

When it happens, administrators ask students to notify them immediately and then launch an investigation, while encouraging parents, should they feel it’s warranted, to contact New Canaan Police (who may conduct their own, parallel investigation). 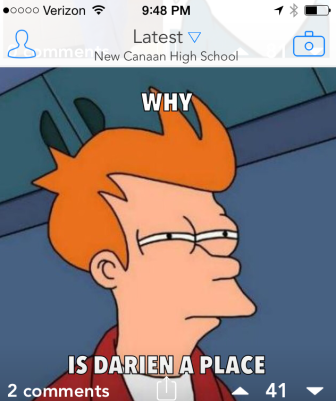 “While we don’t accept reports anonymously, we do accept them confidentially,” Luizzi said.

“Whenever we have a report like this, our goal is to make it stop immediately, as quickly as we can. If it’s a confidential report it may change any kind of discipline that might happen, but we still investigate and do everything we can to make it all stop.”

Often and understandably, students who are targeted by bullies fear that reporting those individuals will make their own situation worse, Luizzi said, so the district proactively tries to “train the student body to become allies.”

“When you use that language around being an ally not a bystander, whether it’s online or in person, if somebody sees somebody else mistreating a peer, [students are taught] to stand up and say something and do something about it,” Luizzi said. “Because so many times the bullies or the people who are doing this mean type of behavior are doing it because of the crowd.” 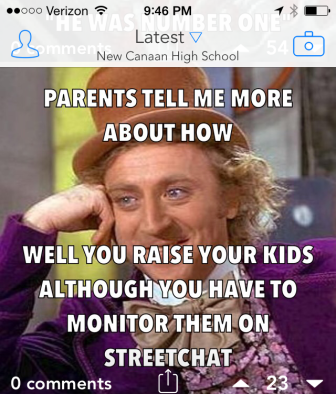 Administrators determine on a case-by-case basis whether and just how to communicate problems such as those caused by emerging mobile apps to parents.

Though problems with mobile apps in the hands of irresponsible teens—particularly those that use geo-location services offer up a kind of anonymous digital corkboard (Yik Yak) or are attached outright to a school (Streetchat)—may be exacerbated on a campus such as NCHS, addressing the wider problem of bullying social media and smartphone use requires “a whole community effort,” Luizzi said.

“We have the kids in school six and a half, seven hours a day,” he said. “We do the best we can with them while they’re there but it’s really that continued support in the community, on the sports teams, at home and on the weekends.” 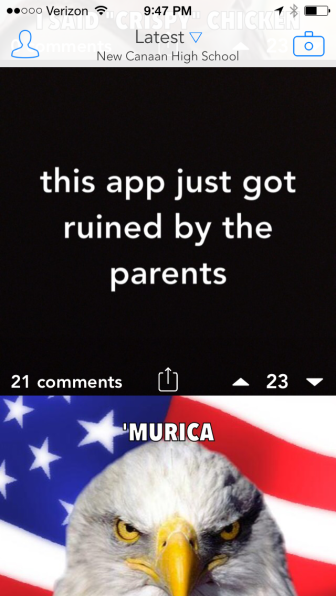 Asked for strategies or talking points that parents could use to reinforce the district’s approach to the problem, Luizzi said it’s important for students to understand that while years ago an individual could have an online persona that’s separate from his or her real life persona, “there is no wall there today.”

“Teaching kids to be polite, respectful and appropriate in all venues, not this idea of going on and trying to anonymously do something. What’s interesting is if they do cross the line with kids on kids, and police get involved, the police can find out who posted it. Almost every time, they can track it down and they can find that person. So the anonymity is a bit of a smokescreen that they think provides them that distance. But we’ve seen multiple students it catches up with them as a result of that police report and investigation.”

Though NCHS students posting to Streetchat Monday night raised questions about the degree of anonymity offered by the app, the company itself states clearly that it complies with law enforcement officials seeking information: “We will not disclose your information unless required by law: We may disclose – or preserve for future disclosure – your information if we believe, after due consideration, that doing so is reasonably necessary to comply with a law, regulation, or valid legal process.” 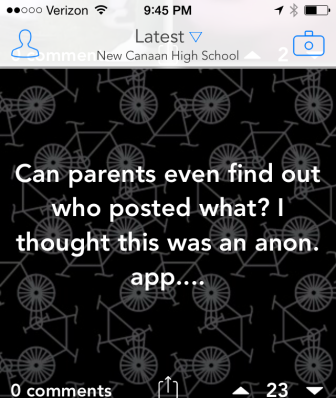 Resources for parents also include a section in the parent handbook that deals with bullying and harassment and how to report it (here’s a form available online that can be used for reporting), and Luizzi said he encourages families to work through situations at home by role-playing scenarios around cyberbullying.

In school, a core group of teens including leaders in the student body meet periodically under Athletic Director Jay Egan and other faculty members to talk about improving the culture there, Luizzi said.

Asked about his role in connection with cyberbullying, Egan said that last year when Yik Yak emerged, he pulled together a group of the captains of sports teams at NCHS to discuss what was happening and how they as role models could help improve behavior. 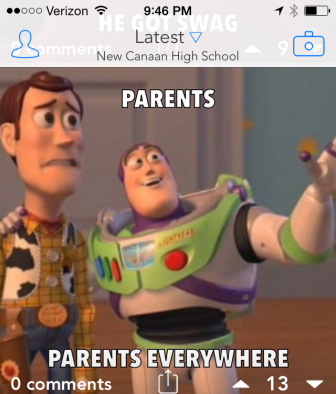 “We met with them when that [Yik Yak] happened and we came to an understanding that it’s a very cowardly thing to do—to write something you don’t put your name to and particularly to pick on weaker people and people who do not have the status within the school that others did—and so we asked them to sort of unite around talking about that and looking at that app as something negative that people do.”

Similarly, adults that include members of the PFA and PTC share in meetings about what’s going on with respect to social media abuse, Luizzi said. In addition, the district’s School Climate Coordinator regularly meetings with a team of teachers, counselors, social workers and administrators to talk about what’s happening with bullying and what’s being done about it. 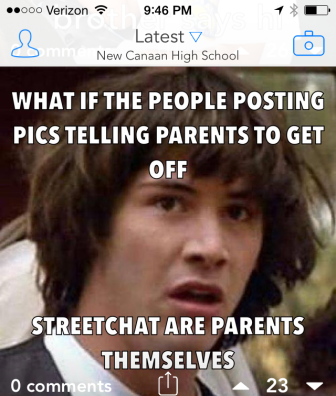 When Yik Yak became a problem last year, the district contacted the company and ended up putting up a “geo fence” around the school to prevent the app’s use on campus, Luizzi said. That tool appeared to have expired some time over the summer, so Acting Principal Dr. Veronica LeDuc on Thursday took steps to renew it, Luizzi said.

Because social media apps are widely available and so much of their use happens outside of school, too, the district will continue to focus on changing the culture of cyberbullying, Luizzi said, even among those who have perpetrated it. 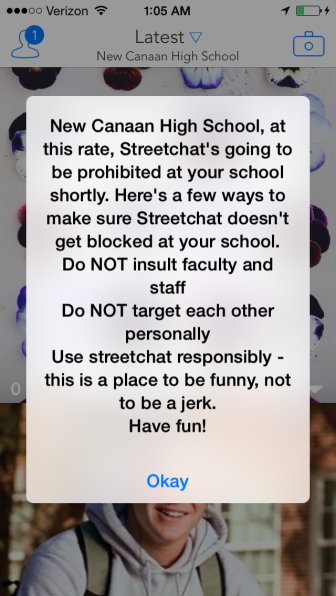 “Once Streetchat gets old, something else will pop up and then something else will pop up,” he said. “So either we just chase our tails or we try to develop the right habits through our instruction and our work, and when we have the students who make mistakes, we work with them to make it right. And also, we work to really teach them to make better choices next time, and to build a more sustainable, positive culture.”