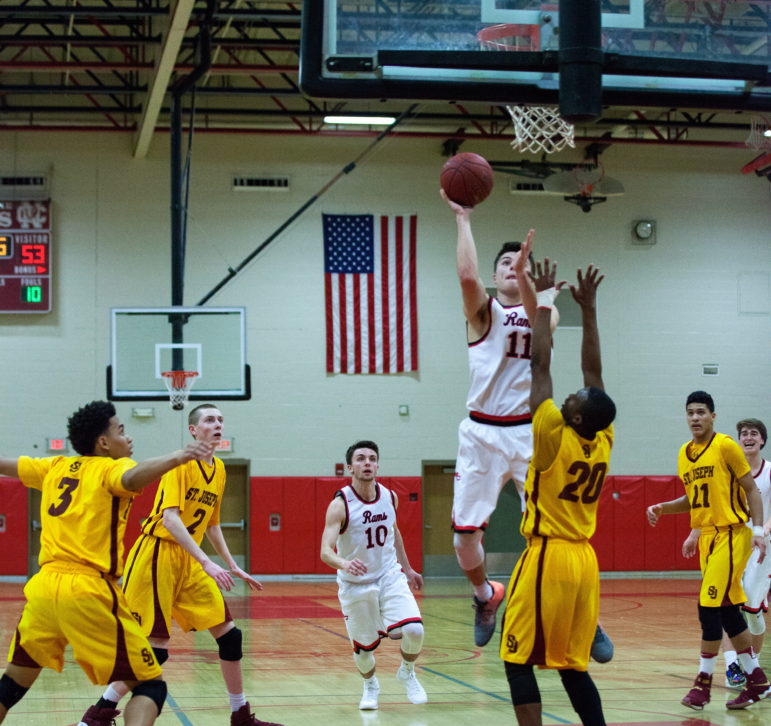 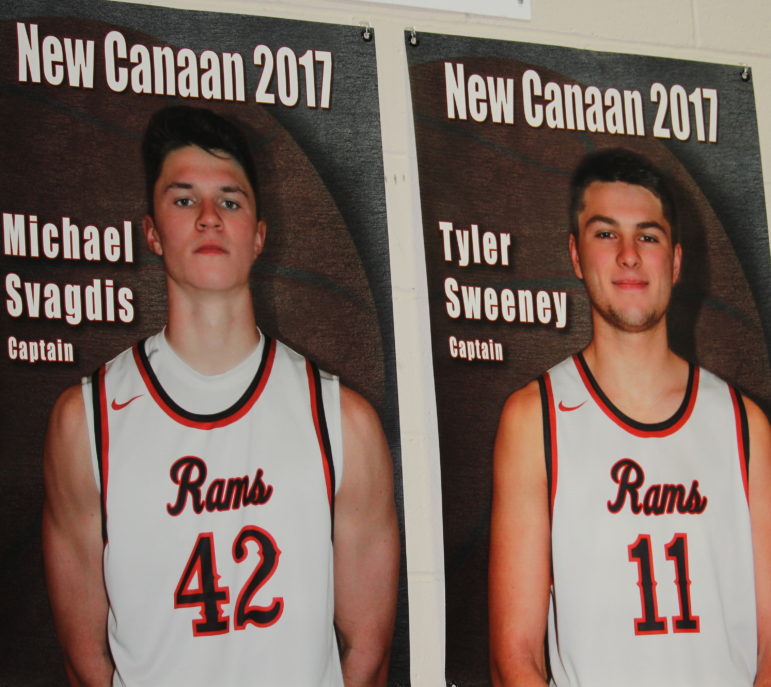 The seniors and their parents. Credit: Terry Dinan 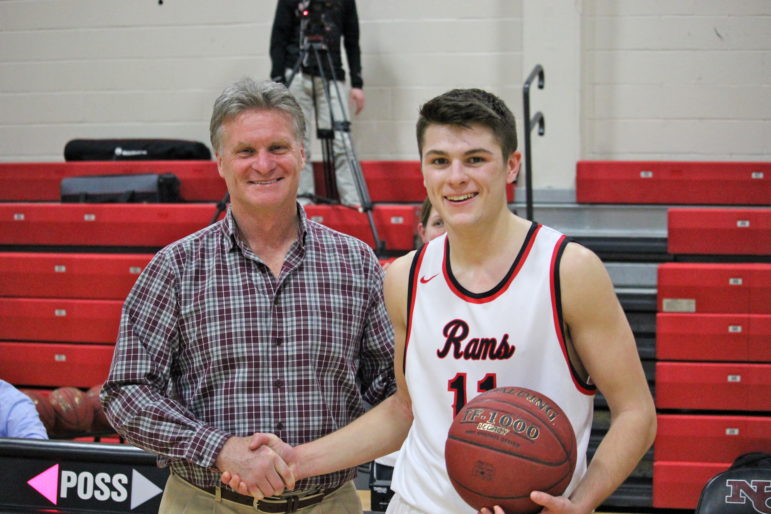 Tyler Sweeney would be the first person to tell you he’d trade every point he’s ever scored for a win. The New Canaan senior basketball star has seen more than his share of personal success over his four-year career—success that unfortunately hasn’t translated into wins for the Rams.

Even so, Sweeney—as he has been every game since cracking the New Canaan lineup as a freshman—was a huge bright spot in the Rams 58-42 Senior Night loss to St. Joe’s, netting the 1,000th point of his career.

Sweeney became the first century scorer at New Canaan since the great Monroe Trout hit the mark in the 1979-80 season. He is only the fourth 1,000-point scorer in NCHS boys basketball history joining Wilky Gimore, Bill Saunders and Trout in that exclusive club (former girls basketball star Sara Mannelly also scored 1,000 points for the Rams).

“I remember coming to watch basketball games here when I was in fourth and fifth grade,” Sweeney told NewCanaanite.com. “I always wanted to play basketball here and I could never have imagined scoring 1,000 points. It’s something special, and I couldn’t do it without my teammates getting me the ball.”

The Rams seemed destined for a victory in the early moments of Wednesday’s game as Sweeney scored New Canaan’s first 12 points of the game. Fellow seniors Timmy Russo and James Crovatto chipped in three points apiece, helping the Rams to an 18-10 first quarter lead.

The Cadets countered in the second, going on an 11-0 run over the first four minutes of the quarter to take a 21-18 lead. A three pointer from junior Luke Crawford and a basket from Sweeney gave New Canaan a 23-21 lead—a lead that turned out to be the last of the game for the Rams.

St. Joe’s took a 26-23 advantage at halftime and outscored New Canaan 21-6 in the third to put the game away. The Rams could not solve the Cadets’ full court press, leading to several turnovers and easy St. Joe’s conversions.

“We’ve gone through dry spells all year,” Melzer said. “Mistakes compound, we miss a couple of shots and we get discouraged. But I’m proud of the seniors. I’m proud of the way they came out and played in the first quarter. And I’m happy for Tyler, it’s an excellent accomplishment for him.”

New Canaan wraps up its home schedule Friday at 5 p.m. with a game against Darien in what will be Melzer’s first experience in the middle of the heated Rams-Wave rivalry.