Paul Mauk had been working as a professional artist, painter and teacher of fine arts when he left his native Colorado in 1981 for Brooklyn, N.Y. 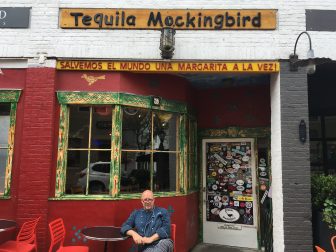 Paul Mauk launched Tequila Mockingbird in 1993. He recently sold the restaurant, which is expected to continue just as it is. Credit: Michael Dinan

He hated living in New York City, and after about one year Mauk heard about an opportunity some 50 miles north.

“Somebody knew [former Gates owner] Billy [Auer] and these guys, and said, ‘I’ve got some friends out in New Canaan—they’ll give you a job,’ ” Mauk recalled on a recent afternoon as pedestrian and motor vehicle traffic passed by the familiar, colorful exterior of Tequila Mockingbird.

Mauk jumped at the chance.

Arriving, Mauk moved in upstairs at 10 Forest St. (or, as the formal tax records now variously have it, 18 Forest St. or 90 Main St.)—renting from the 1881-built structure’s then-owner, the celebrated architect, educator and artist Victor Christ-Janer—and began learning the ropes of the restaurant business as a waiter at Gates, itself just four years old at the time. 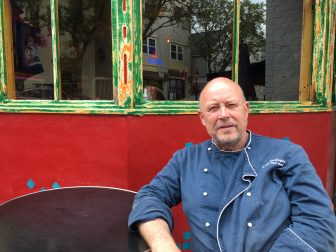 By 1993, Mauk had gravitated toward the kitchen, and that year he would open his own restaurant—influenced in its décor and cuisine by Mexico, for which the Coloradan had felt an affinity since first visiting the “Land of Enchantment” as a teenager.

That restaurant, Tequila Mockingbird or just ‘Tequila,’ as it is known locally, has been a family-friendly fixture of Forest Street ever since, approaching 25 years as the longest single person-owned restaurant in New Canaan.

Mauk recently sold the restaurant to a group that had purchased purchased Gates next door, and will step away from Tequila Mockingbird at summer’s end.

“I am good with it,” Mauk, a New Canaan resident since his arrival in 1982, said when asked how he’s feeling about the prospect. “I have no problem.”

He added: “I managed Gates before this, so I’ve been in the restaurant business for like 35 years.”

Tequila Mockingbird’s new owners could not immediately be reached for comment. Their plan is continue the restaurant as it is, Mauk said.

“We have a very loyal clientele,” Mauk said. “And also the people who work with me have been with me for many, many years. There is no one in that kitchen that hasn’t been there a minimum of 12 years. My main guy has been with me 21 years. My wait staff I have guys over 20 years on the wait staff, too. So those are the people I really concern myself with above anything else.”

Built and designed by Mauk himself, the beloved restaurant in many ways reflects its creator.

Prior to coming east, Mauk had taught drawing and painting in a private school, and he keeps an artist’s studio at his home in New Canaan. The artwork that adorns the restaurant’s fun, whimsical interior—complete with signature saloon-style swinging doors leading to the restrooms—were created by Mauk himself.

In fact, Tequila is not Mauk’s first restaurant.

A few years after starting at Gates, he and Auer went in together on a place in Mt. Kisco “and that was my sort of debut as an owner,” Mauk recalled.

“So I hired everybody there and the one chef that I had was a classically trained French guy. I worked with him and that kind of got me going into the food side of things. And here [at Tequila] I had a variety of people cooking when we first started. There wasn’t a sharp focus on what we were doing.”

That would soon change, and Tequila Mockingbird has established itself, in part, on a reputation as one of New Canaan’s most consistent, high-quality, welcoming, well-run restaurants (though some of us will never forgive Mauk for removing the mustardy “Cowboy Pork Chops” of the mid-‘90s from his menu).

The restaurant uses traditional ingredients, importing most of its produce—including all dried chiles and most of its fresh ones—from Mexico. Tequila’s beef comes from New York and some of its pork comes from the Cambridge, N.Y.-raised Berkshire pigs of farmer John Ubaldo (brother of Robert Ubaldo, owner of Farmers Table two doors down).

One of 20 restaurants to receive certification from the Consejo Regulador Del Tequila in 2012 for its “expertise in tequila and its culture,” the restaurant has seen its menu evolve from what could be called “Southwestern” style to regional Mexican.

Mauk himself enrolled in classes in Mexico City, attending a master chef program in traditional Mexican foods as well as classes in “Alta Cocina” at Culinario Ambrosia in the fall of 2008. The following summer, an instructor from the school spent the summer in Tequila Mockingbird’s kitchen, directly training the staff.

Asked about his immediate future plans, Mauk said he’s not sure what happens next, though he will not be cooking food in a restaurant here any time soon, following a non-compete agreement.

“I will tell you the truth, I don’t know if I am going to stick around [New Canaan],” he said. “I am basically going to play it by ear for a few months, to see what I think.”