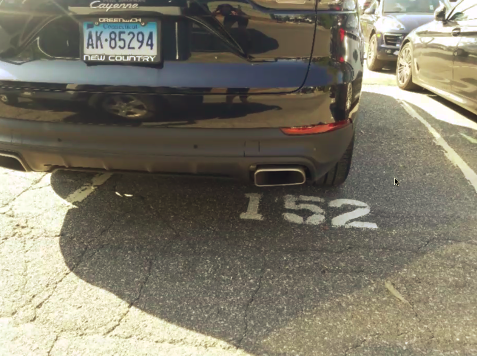 This is the Parking Department's photo of the obstructing two spaces violation in the Playhouse Lot. Parking Commission photo

Officials last week upheld a $30 ticket that had been issued to a New Canaan woman on a Friday afternoon in October for parking in two spaces at a lot downtown.

The driver, Eryuan Huang, told members of the Parking Commission at her appeal hearing that when she first tried to pull into space number 152 in the Playhouse Lot around 11:30 a.m. on Oct. 15, a big SUV to the right was already so close to the line that her passenger—a friend from Greenwich—couldn’t get out.

“I felt like the other driver, if he opened the door, he could potentially just touch my car,” Huang said during the hearing, held Thursday night via videoconference.

“I actually backed out several times just to think about it, and then I went in,” she said.

Huang added, “I would not take another space if I could, this truly went through my mind.”

Yet she did not take a photo of the offending SUV, commissioners noted before voting 3-1 to uphold the ticket. The only photographic record of Huang’s parking job was the one taken by the enforcement officer who issued the ticket around 1 p.m..

During the hearing, Richey said, “The difficultly I have is, when I look at this photo, there’s no big SUV. That car is well inside its lane. But I understand that if there were a big SUV on the line, that people would want to move aside for it.”

The Commission asked Huang how long she’d been parked there before discovering the ticket (about 75 to 90 minutes) and whether there were any other available spaces (she wanted this one because she had a sore ankle and didn’t want to walk far).

During deliberations, Richey said, “I just have been I the situation myself where someone is overhanging the line so you have to park appropriately far away so that they have room to get into the driver’s seat.”

Ogilvie said, “Or you continue driving around the parking lot.”

Richey: She wanted this spot.

Ogilvie: Because she had a sore ankle. That sounds like ‘The dog ate my homework, Keith.’

Richey: Well, all tickets sound like ‘The dog ate my homework.’ And that sounds pretty bad until you’ve ever had the dog eat your homework.

Magratten following the vote said, “Couple of things I have learned never to do: Never write in books or dog-ear them, and never take more than one parking space.”

Ogilvie said in response, “Good thing you don’t have a sore ankle, Drew.”