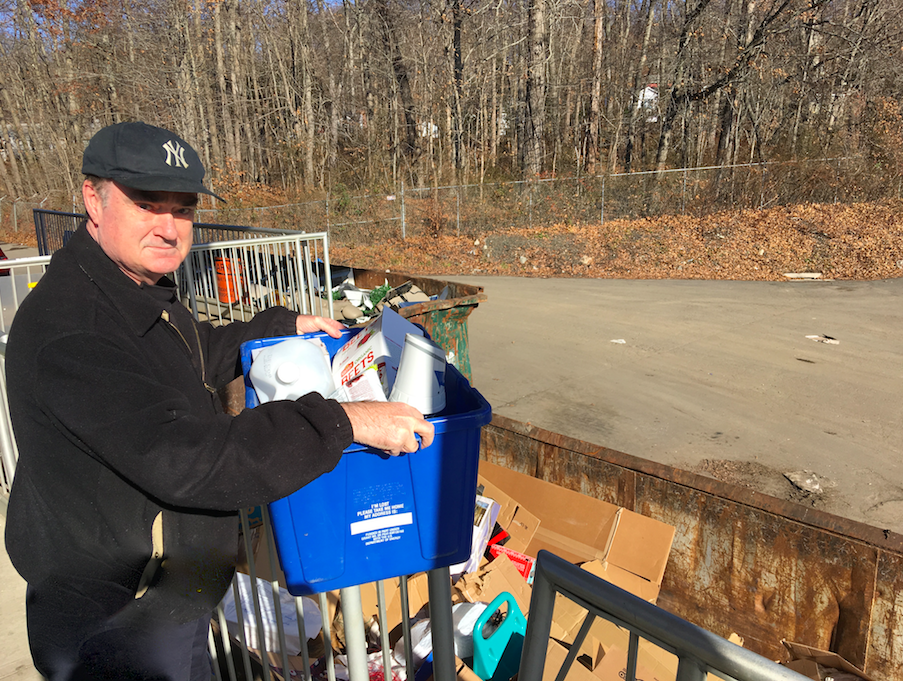 Saying a dramatic turn in the recyclables market is hitting the town, officials last week approved a $197,000 one-year contract with a Stamford company to haul and dispose of glass, plastic, paper and other materials discarded at the Transfer Station.

The hauling of recyclables has “changed considerably in the last couple of years” due in part to a problem with glass that breaks in the single-stream system, so that where towns such as New Canaan “used to make a little bit of money,” they’re “now getting charged a lot of money to get rid of it,” according to Don Smith, assistant superintendent of solid waste with the Department of Public Works.

“China is no longer taking it,” Smith told members of the Board of Selectmen at their Dec. 4 meeting, held at Town Hall. “They are just trying to find markets to get rid of it, and a lot of people don’t want it.”

The changing market is increasing New Canaan’s recycling costs by about five times, officials said. Part of the change has led to a steep increase—from about $78 to $225—in the fee that New Canaan is changed on a per-container basis for hauling away a dumpster, Smith said. In response, he said, workers are getting help from the Highway Department to get a machine that will pack down recyclable dumpsters in order to reduce the total per-pull fee.

Even so, it isn’t clear whether budgeted funds will cover recycling costs for this fiscal year. Public Works Director Tiger Mann told the Board that he likely will seek an appropriation from the Board of Finance to ensure funds are in place.

Smith said state officials now are working on a solution to a problem with single-stream recycling.

“Basically it’s the glass,” Smith said. “When the glass breaks it gets embedded in everything and just destroys it.”

Devereaux asked whether Connecticut is likely to abandon single-stream.

Smith said he didn’t think so.

“The state has got everybody doing it, they have new programs, they have new flyers they are handing out at the transfer stations, there is going to be an ad in the paper,” he said. “They are trying to push one consistent thing for the entire state.”

Mann said that some towns are looking to do just that.

“But we have not had any direction from the state yet,” he said. “Everything is still being pushed as a single-stream recyclable to try to drive up the amount of recyclables. The problem is that there is not a market for them at present.”

Mann noted that New Canaan used to pay to dispose of its recycling.

Smith said that in 1991, when the current program started, the town paid but “then gradually it started gettin better.”

“And then the bottom fell out,” he said.