Local businesspeople in New Canaan work tirelessly year-round to serve the town of New Canaan and its residents—giving of their time and rolling up their sleeves to provide goods and services for those in need, coach youth sports and volunteer to support community events. 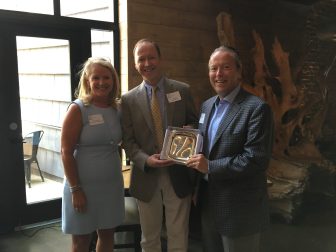 On Tuesday, the New Canaan Chamber of Commerce recognized three businesses who have made a significant impact.

“We do this every year—this is our way of honoring the businesses that support our town,” Tucker Murphy, the executive director of the New Canaan Chamber of Commerce, said during the organization’s Annual Awards Luncheon, held at Gates. “It’s always hard because there are so many that do so many great things.”

This year’s winners are:

“The Golden Shovel is for an organization or club that lends to the beautification of downtown,” Murphy told NewCanaanite.com, referring to Hutchinson’s Christmas lights that run throughout town in the winter months. 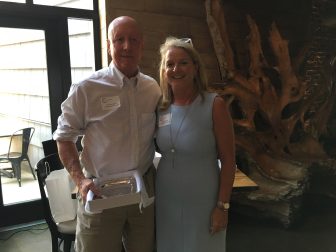 “The lights is just an all time favorite. That’s what everybody knows when they come downtown during the Christmas time and the holiday time. It’s just amazing.”

Murphy said that the Volunteers of the Year award is for an individual, organization, or a business that helps out around town with or without being asked, regardless of the task.

“This year, certainly with the Karl family recognized for all that they do, beyond the Chamber. Downtown sports, you name it, they all are part of that,” Murphy said. 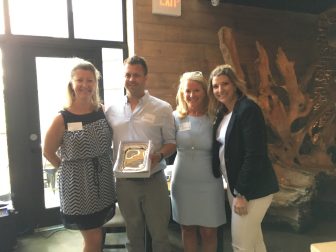 The Business of the Year award goes to a business that is “always here and raising their hand whenever there’s something going on, or coming up with ideas and events,” according to Murphy.

“South End Uncorked is always available to us,” she said. “We had a lot of functions with them and they support the community as well.”

“I think people genuinely feel fortunate to live in a community like this, and I think for many folks, it’s just human nature to want to give back because you’re thankful for where you are,” he said. “Today, it just happened to be my name, but it could’ve been any number of hundreds of other people, but that’s what makes New Canaan special. It’s a really great community, and we’re all better for it.”