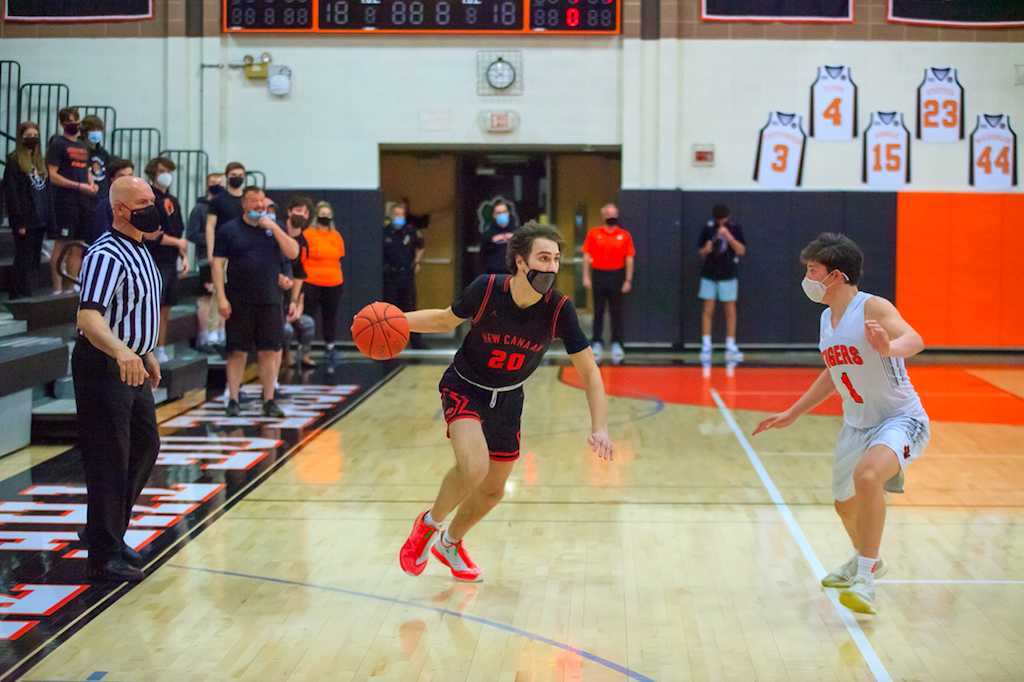 For more than 26 minutes Tuesday’s FCIAC semifinal showdown between Ridgefield and New Canaan lived up to its billing and looked to be a fitting sequel to the previous meeting between these two teams 20 days ago—a double-overtime win for the Rams. 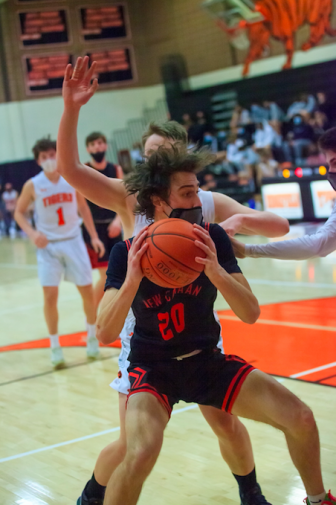 Unfortunately for New Canaan, a storybook ending was not in the script this time around.

The top-seeded Tigers outscored New Canaan 16-4 over the final 5:15 en route to a 62-49 win. With the win, Ridgefield advanced to the FCIAC finals for the third consecutive year and will try for a three-peat against Westhill.

Meanwhile the Rams, who came into the tournament as the No. 5 seed will wait another year to seek their first FCIAC title since the 1968-69 season. This was the first FCIAC semifinal appearance for the resurgent New Canaan program since 1984. 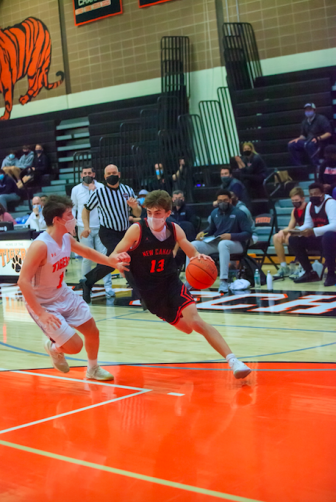 “I’m so proud of these seniors and all they accomplished,” New Canaan head coach Danny Melzer said. “I know that’s hard for them to understand right now. What they have accomplished in terms of making New Canaan basketball relevant, one of the best programs in the FCIAC—that’s what I’m proud of.” 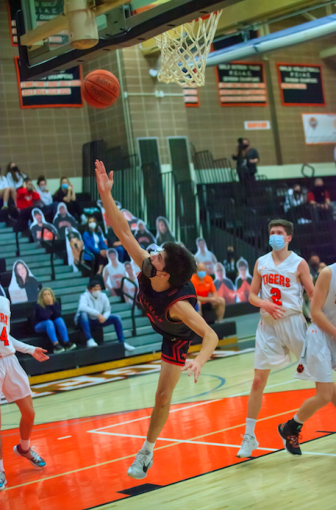 Things started off well for the Rams, who faced a Ridgefield team that outscored its previous two playoff opponents 186-99. Blake Wilson scored the first three New Canaan points of the game and banked in a fadeaway at the buzzer to put the Rams up 13-10 after one.

Ridgefield began the second quarter on an 8-1 run to take an 18-14 lead with 6:20 left in the half. The Tigers extended that lead to 24-18 but the Rams closed out the quarter by outscoring Ridgefield 8-2 and headed into the intermission knotted up at 26.

The Tigers came out on fire in the third and had a 37-29 advantage with 4:31 remaining in the period. Following a timeout, the Rams countered. Sweeney hit a layup and then a corner three to pull the Rams back, 37-34. After a basket from Wilson and one from Mulcahy, New Canaan was suddenly back in front 38-37. 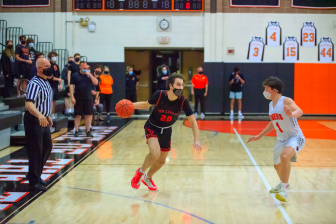 The Tigers scored the final five points of the third and held a 42-38 lead going into the final stanza.

The Rams tied the game at 44 with 6:43 left and trailed by just one, 46-45 when the Tigers missed the front end of a one-and-one but grabbed the offensive rebound. Ridgefield’s Matt Knachel converted a basket, was fouled and hit the ensuing free throw that extended the Ridgefield lead to 49-45. It was the start of an 11-0 run for the Tigers over the next four minutes. And it was the beginning of the end of New Canaan’s FCIAC title dream. 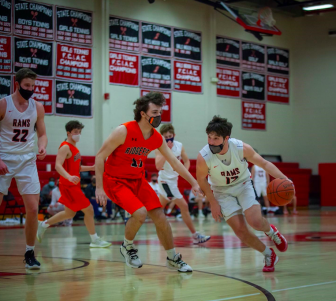 “I thought we got good looks but they just didn’t fall,” Melzer said. “Sometimes that happens in basketball. They got to the line a ton and we didn’t and I think that was one of the major differences in the game.”

Despite the score slowly slipping away, Melzer kept subbing in players on alternating offensive and defensive possessions down the stretch. Not until the final second ticked off the clock did the Rams let up – emblematic not only of the 2021 team but also of how far the program itself has come since Melzer took it over five years ago.

“We’re not going to have any regrets about how hard these guys played and how much they gave to the program,” Melzer told NewCanaanite.com. “I’m going to miss them. They’re a very special group.”