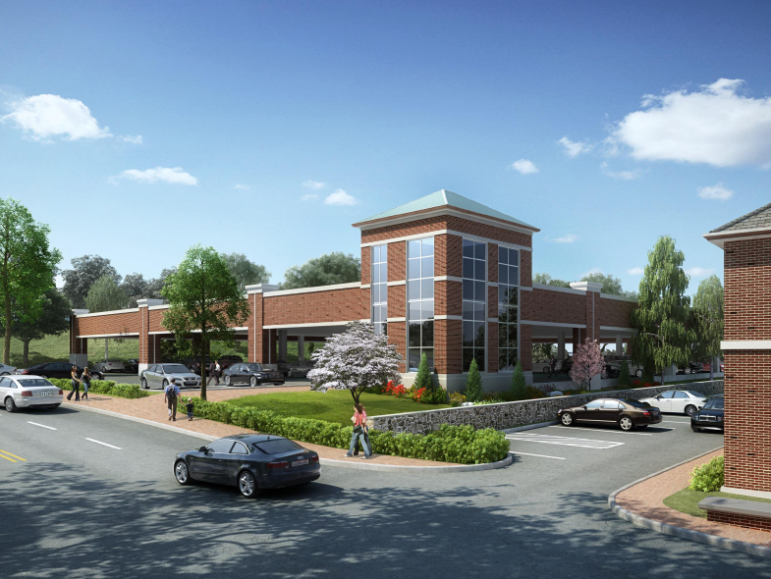 A new rendering of the planned parking deck for Locust Avenue in New Canaan. Courtesy of the Department of Public Works 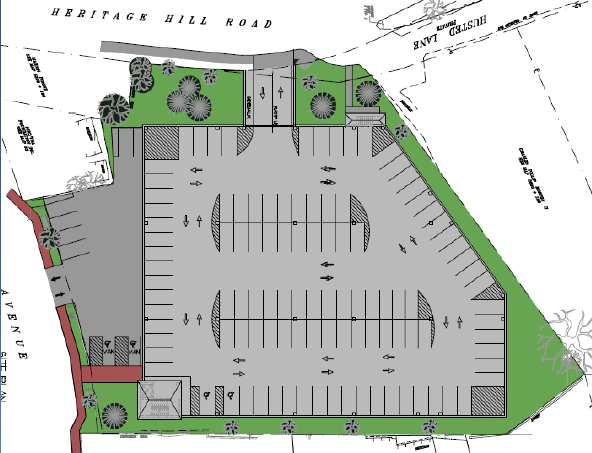 A site plan for the planned parking deck for Locust Avenue in New Canaan. Courtesy of the Department of Public Works

Public works officials are seeking approval to kickstart next fiscal year the highly anticipated parking deck at the Locust Avenue lot, a proposal that has garnered wide support from municipal officials but has been put off with major capital projects at Town Hall and Saxe Middle School.

The estimated $4,125,000 would be bonded (minus up to $500,000 to be withdrawn from a town “parking fund”) during fiscal year 2018 and the structure itself “is in keeping with the Post Office” next door and firehouse across the street, according to Department of Public Works Director Tiger Mann.

“You see how nice it fits in with the Post Office,” Mann told members of the Board of Selectmen during a budget presentation on Jan. 24 at Town Hall.

Referring to a new rendering (see two-slide gallery above) of the deck, Mann said a view from the Forest Street side of Locust “is clean” though there’s a telephone pole and transformer in the way from Joe’s Pizza across the street.

“We are in talks with Eversource right now to see if we can have that pole removed and placed underground,” he said. “Right now it has a lot of the infrastructure—cable and phone—for Locust avenue.”

On a backburner for two-plus years during the renovation and expansion of Town Hall, the Locust Avenue parking project had been earmarked at $4 million  in the fluid 5-year capital plan. The project itself long has been pegged for 2018, First Selectmen Rob Mallozzi has said. Town officials have said they would seek state-administered funds to help offset costs.

Mallozzi noted at the meeting that the New Canaan Chamber of Commerce supports the project “and I believe most members of town government” have reviewed it.

“I believe we are at a point of having a good understanding of the dynamics and certainly the community understands the importance of this. It has been kicked down road a bunch.”

Downtown New Canaan needs more parking for commuters and others, according to town officials. The preferred new design at Locust would add some 89 new spaces, officials have said.

Selectman Nick Williams asked whether the infrastructure work vis-à-vis the transformer and telephone pole would be paid for by the town or Eversource.

Mann answered that the town would pay for it because it’s not a physical hardship.

“This is more of an aesthetic ask,” Mann said. (Note: The DPW for years has had its internal motto—“Keepers of the Aesthetic”—on its budget proposal presentations. This year, the agency added “Maintainers of the Mundane.”)

The new deck is to include two entrances—on Locust Avenue to its “street level” there, and on Heritage Hill Road to the upper level. Town officials commissioned a traffic study which determined, last summer, that there is a way to get traffic exiting the new deck safely onto Heritage Hill.

“This is exciting,” Selectman Nick Williams said. “We have been talking about this for years. I believe this will ‘supercharge’ the businesses in the northeast portion of [downtown New Canaan] and change their complexion in a favorable way.”