For Cindy Stewart, a New Canaan resident for 11 years, recent changes in the United States’ immigration policies are an opportunity to teach her teenage children lessons in democracy.

Chief among those is “to make their own voices heard,” according to Stewart. 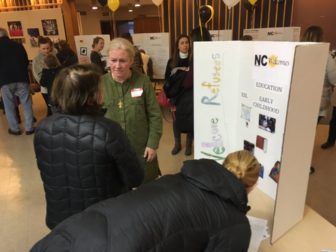 “I feel like it’s important for us to model that for them and to show them to stand up for what we believe in and I want to support our view for what this nation is all about, and this is part of our process,” Stewart said Sunday afternoon from Morrill Hall at St. Mark’s Episcopal Church, moments after signing up for the ‘Welcome’ and ‘Transportation’ committees of a newly formed New Canaan group seeking to help resettle a refugee family.

“We talk a lot at home over the dinner table about the political situation in Syria. I know my children have done projects at school about Syrian refugees and the conflict there and in other areas, and I feel it’s important for them to be able to put a face to the problems that we see in the world, so they can be compassionate humans as they grow up. I think that something like driving and spending time with [members of a refugee family] and helping figure out their day-to-day lives is a way to give that exposure to them as humans.” 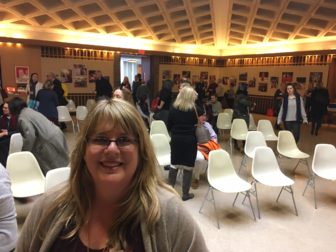 Stewart was one of more than 100 people to attend an information session led by NC Welcomes, a nonprofit organization founded by New Canaan resident Juli Kurtzman. Established in the fall with help from St. Mark’s and in partnership with New Haven-based Integrated Refugee & Immigrant Services, NC Welcomes is moving forward with plans to help a refugee family resettle and assimilate here in town or a nearby community.

Though that physical move for a future New Canaan family is on hold while federal officials sort out a newly signed executive order that suspends for four months the United States’ refugee admissions program (more on that below), Kurtzman said it can take that long in any case “to get a family.”

“There are still people at refugee camps who are doing the required background work,” Kurtzman said. “It still takes this amount of time. My personal view—and I’m not a lawyer and I won’t pretend that I am one—is that it has to be unconstitutional.” 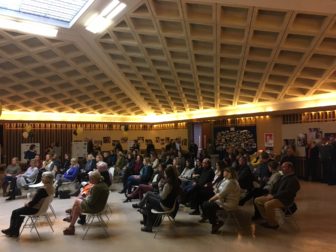 Citing national security and the Sept. 11, 2001 terrorist attacks, the order (see full text here) suspends the U.S. Refugee Admissions program for 120 days to make changes to it, and says that Syrian refugees would be prohibited from entering the United States until the president himself says those changes make it OK.

Specifically, the order calls for a review of information that the United States requires from those seeking to enter the nation—a report due 30 days after the order was signed late Friday afternoon—and says people from countries that fail to comply with those requirements 60 days later will be prohibited from entry.

The order also suspends entry outright for 90 days those who hold or seek to obtain other types of visas—as students, professionals or regular visitors, for example—if they’re from Iraq, Iran, Libya, Somalia, Sudan, Syria or Yemen.

Noting that those nations are majority-Muslim and that none of them are the birth countries of the 9/11 terrorists, critics have called the order rooted in religious discrimination—it specifies that after 90 days, members of “a minority religion” in their countries may be prioritized under a re-launched U.S. refugee admissions program—as well as ineffective, un-American, unconstitutional and even dangerous. It drew large protests in New York City and elsewhere, and a judge on Saturday night ruled that the president’s order could not lead to the removal from the United States of people who already had arrived under the refugee program or with valid visas of any type, including permanent resident visas, known as “green cards.” Late Sunday, the New York Times reported that green card holders would not be prevented entry. 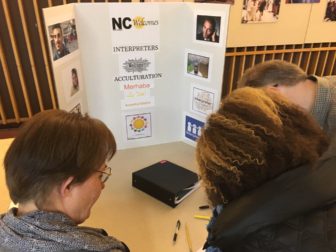 Kurtzman said she is “sickened and horrified by what is happening.”

“I still believe 100 percent that we will have a family,” she said. “That, to me, is almost a side issue because I know we will have a family. But I am just appalled and embarrassed at what our government is doing. And I really, really think that he has stepped way outside what is legal and the ACLU will be our best friends here with this.”

If and when a refugee family assigned to NC Welcomes arrives in the United States, the organization will have arranged for a rented apartment tor house, turned on the utilities and Internet, supplied cell phones, stocked a refrigerator and made ready a warm and culturally appropriate first meal.

The group will have arranged for local people to collect the family from JFK airport and a slew of other volunteers will help with a wide range of practical matters—registering the family with Social Security, getting ID from the Department of Motor Vehicles, health insurance, vaccinations, medical and dental services, English as a Second Language instruction and more.

At the info session, those gathered visited tables with headings such as Finances, Healthcare, Education, Employment, Transportation, Interpreters and Government Agencies to sign up for committees dedicated to those various tasks. Many already have signed up online at the NC Welcomes website, Kurtzman said.

One of those involved early on with NC Welcomes, town resident Miki Porta, also is a vestry member at St. Mark’s and, because the church already had identified refugee resettlement as one of its priorities, connected the two. St. Mark’s has provided financial assistance, communications and legal aid, among other things, according to Kurtzman. A GoFundMe page for NC Welcomes raised more than its $15,000 goal in 17 days.

The Rev. Martha Klein Larsen said members of St. Mark’s connected with Kurtzman straightaway on meeting with her, and that the refugee resettlement effort is in line with the church’s principles.

“We are an aware group of people and we know there is a refugee issue with welcoming folks into our borders,” she told NewCanaanite.com. “And for us as Christians, it is: How do we be welcoming? How are we the welcoming presence of Christ in the world, and how can we help to create community and transform lives, including our own? It’s a natural fit.”

The NC Welcomes effort has drawn from a large cross-section of the community, including multiple churches and faith groups.

Town resident Krista Fox, an interior designer and member of the Congregational Church of New Canaan, said she signed on to a committee that will help furnish the refugee family’s future home because “a lot of furniture comes my way.”

“People getting rid of things and finding homes for things—there are a whole lot of donations and a whole lot of pieces of furniture or home-making items that come my way, so it seemed a natural fit for me,” she said. “Donations. So it’s a matter of finding this kind of home made sense.”

Fox said she was drawn to the larger purpose of NC Welcomes because “America is going through a really tricky time right now.”

“Now it’s become even more a message that we need to send that we are a place that can receive people in a proper way, and that’s what we do, and we do it well and we do it with welcoming arms in a very communal way. That’s the message.”

One thought on “‘We Are a Place That Can Receive People’: Despite Executive Order, Nonprofit ‘NC Welcomes’ Readies for Refugee Family”