Praising the diligence of municipal workers and volunteers, as well as district officials for the granular level of detail made available in their own spending plan, the Town Council on Wednesday unanimously approved a total budget for next fiscal year of $141,121,088. 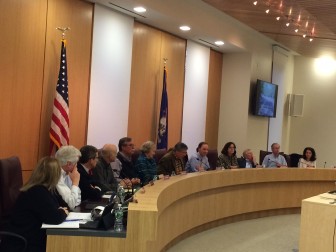 The first budget passed since the widely discussed Audit Committee was put in place, it marks a 2.09 percent year-over-year increase, including a 3.66 percent bump in the Board of Education’s operating budget (driven mainly by health insurance costs). For the first time in recent memory, no one spoke during the public comments section of the final budget hearing.

Addressing the Board of Education—several members of which attended the meeting with Superintendent of Schools Dr. Bryan Luizzi and Director of Finance and Operations Dr. Jo-Ann Keating, among other administrators—Karl called their budget presentation “amazing.”

“You worked real hard, you guys came prepared and had the most information we have ever had, so thank you for that,” Karl said during the meeting, held at Town Hall.

He also specifically addressed New Canaan Finance Director Dawn Norton and Tom Stadler, administrative officer in the first selectman’s office: “Dawn, you gave us so much information and were very organized. And the guy in the back there—this is my last ‘thank you’—so quietly sitting there, Tom thank you so much for all you do behind the scenes. You do an amazing job, so thank you so much.”

He said: “Obviously we are a mix of people who can do this in their sleep and people who are brand new to the process and what impressed me the most is how the new people on the Town Council really rolled up their sleeves and dug in with all the department heads they are charged with working with and spent hours and hours and hours with their department heads, going through not only the budget but the inner workings of how their departments really go—the numbers behind the numbers, if you will—and worked with the Board of Finance, because they do an amazing job as well, in rolling up their sleeves and really get a sense of where all the taxpayers’ money is going. And of course for the people who work for the town, they are 24-7 always for the residents and it really is much appreciated. You guys have done a pretty amazing job.”

Here’s a table that details how some of the spending plan for next fiscal year breaks down among municipal departments—for more detailed information (for example, how “Public Safety” breaks down among categories such as police, fire and ambulance) and for capital spending figures, monitor this page on the municipal website or see the Board of Finance recommended budget here.