Raising questions about the exact scope of a proposal to list Waveny Park on the National Register of Historic Places, as well as some concerns about just what might follow from the designation, the Town Council on Wednesday night decided to postpone a vote for at least one more month.

At one time, an effort led by the nonprofit New Canaan Preservation Alliance focused on listing just Waveny House and that century-old structure’s immediate environs on the National Register, though—with the thought that the park’s outbuildings and grounds, too, could benefit from an opportunity to get matching grants from the state for capital projects—the proposal has since expanded to include the entire park. 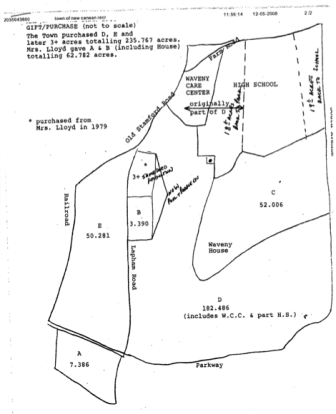 Waveny Park is composed of five parcels. One way to think about the Town Council’s halting approach to listing the property on the National Register of Historic Places, councilman John Engel said at the group’s Nov. 19, 2014 meeting, is that three possibilities are on the table, in order from least comfortable for the Town Council to most comfortable: 1. All of it (sections A, B, C, D and E), 2. Everything east of Lapham Road (B, C and D) or 3. Just section C, which includes Waveny House and the grounds near it. Contributed image

But just what encompasses the “entire park” among the five contiguous parcels that form Waveny (see image at right) and whether New Canaan should seek to list all of it on the National Register in one shot are open questions, Town Council members said at their regular meeting, held in the Sturgess Room at the New Canaan Nature Center.

Town Council member Kevin Moynihan said he was concerned about “potential negatives” of the listing, such as limiting what could be done on properties abutting Waveny if the designation was granted.

“I recall that if you were following the Connecticut Siting Council’s approval of the Armory location for cell towers and the state historic preservation office used the Merritt Parkway’s designation on the National Register of Historic Places as a basis for restricting what could be done on state property adjacent to the National Historic place,” Moynihan said. “So not only can the place itself be affected, but adjacent properties can be affected. The same is true of the Glass House. Because you have certain proposals made, they [the Glass House] raise the National Historic designation, that is something to be considered for the adjacent properties, so we ought to really understand this fully.”

The Town Council opened discussions about the prospect of listing Waveny on the National Register of Historic Places in July, and postponed a decision then, saying the public needs more time.

The park, or some portion of it, would be the first public property in New Canaan to be listed on the National Register (Town Hall is on a state historic register).

A subcommittee of the Town Council earlier this month held a public hearing on the question of listing on the National Register, and heard from several proponents of the project. Then the Park & Recreation Commission amended its support for the listing to include the entire park and not just Waveny House.

Proponents have said the listing itself does not preclude any new use or capital project connected to the property or its buildings, except when federal funds are used for the work. Matching dollar-for-dollar grants from a division of the state DECD could be available for work on Waveny House, its outbuildings and even the property’s grounds, depending of the project, advocates for the listing say.

Yet questions remain for the Town Council not just about which piece of Waveny to put forward for the listing (the NCPA has agreed to pay for the application, which could cost up to $30,000, officials say), but also whether New Canaan would really benefit by securing available funds.

Town Councilman Roger Williams said: “I don’t think we know enough, we haven’t really examined the actual grant language to see if the terms of those grants would be the town would be willing to accept and potentially encumber itself with.”

Town Council Vice Chairman Steve Karl said that Waveny for decades has undergone changes and evolutions quietly and at its own pace “and we have been a steward of that property since that gift was made, and been so protective of every single thing that we have done there that to have any kind of outside influence or anybody telling us—in any way, even if we didn’t take money or took money—if that was ever held as a chip to let us not do something, that would really be a difficult situation, to me anyway.”

Town Council Chairman Bill Walbert said that a “divided Town Council is not the way to go on this particular topic.”

“I certainly do not mind dissention on every topic of discussion, but [with] something like Waveny, I wouldn’t feel very comfortable if any Town Council member had any question in back of their mind.”

He continued: “It is clear to me that this group feels more comfortable with the defined parcel that we are talking about laid out for them, so that they can walk it, feel it, even with a discussion of the fact that there are no restrictions, I think this group would feel better if they defined for themselves what we are going to offer out there to be put on the potentially put on the National Register and then come up with specific, call it ‘rules of engagement’ going forward so that everyone on the Town Council, and therefore people in the community, feel that their prize is being treated way they want it to be treated.”

NCPA President Rose Scott Long, who was on hand to answer questions from the Town Council, asked what would be needed to get members to that point.

Ultimately, the Town Council decided on Wednesday to gather up questions from its members for the subcommittee to follow up on. Its next regular meeting is scheduled for Dec. 17.