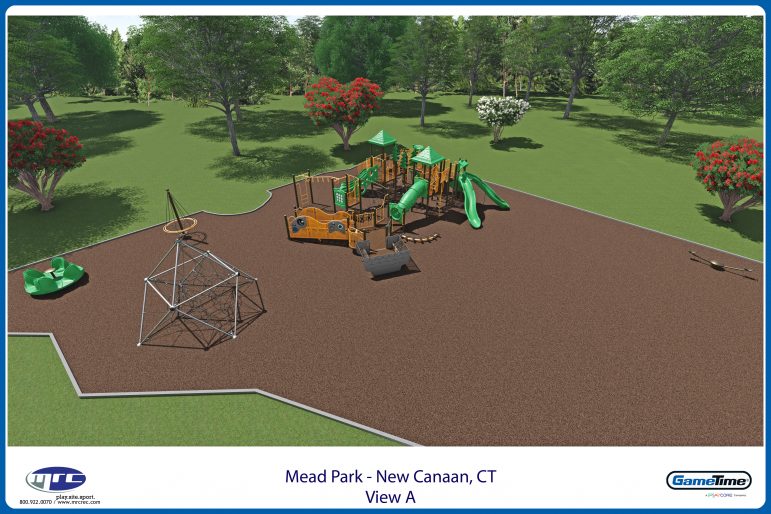 A computer-designed composite rendering of the proposed playground equipment for Mead Park, from GameTime. 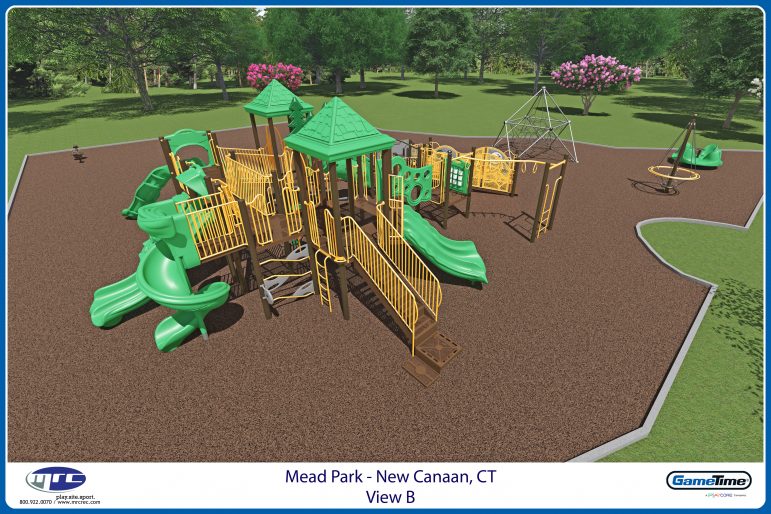 A computer-designed composite rendering of playground equipment planned for Mead Park, from GameTime.

Town officials on Tuesday agreed to enter into a contract with a Fort Payne, Ala.-based company for new playground equipment at Mead Park.

The $150,889 contract with GameTime is part of $190,000 budgeted for the current fiscal year to upgrade the outdated equipment there now, with the balance of going to removing existing footings and wood chips at the kids’ main playground at Mead and to grade the site for the new gear.

Though the installation itself is not planned until next summer, placing the order with GameTime now will lock up a price and avoid an additional $7,500 in fees, according to Recreation Director Steve Benko.

Benko told members of the Board of Selectmen during their regular meeting that a new “Pour In Place” or “PIP” smooth rubber surface that will surround the playground equipment—as well as some additional play structures—are to be funded by the nonprofit Friends of Mead Park Playground.

The Friends group, founded by two New Canaan moms, “came up with the plans,” Benko said during the meeting, held at Town Hall.

The PIP surface “is softer if a kid falls and also allows moms to put strollers on it and allows a child with a physical handicap who uses a wheelchair or crutch to move around easier,” he said.

After some discussion, First Selectman Kevin Moynihan and Selectmen Kit Devereaux and Nick Williams voted 3-0 in favor of entering the contract.

The selectmen asked Benko whether the capital funds are in place this year or for next fiscal year (this year), how much the Friends are looking to raise ($200,000), whether the women behind the Friends—Allyson Mahoney and Monica Chimera—will be able to make small changes to the equipment later if needed (yes) and whether a ropes course is included in the bid document (yes, though it’s somewhat smaller than the original 20-by-20-foot model envisioned, because otherwise it wouldn’t fit with a 6-to-8-foot “safety zone” around it).

Moynihan asked what happens if the Friends do not meet their fundraising goal.

Benko replied: “They have started their fundraising campaign and I am very confident that they will raise their money.”

He later added that New Canaan has enough money in its own allocation to put in the playground and that the PIP surface would not be added until after the equipment is in place in any case, in which case the town could leave the Fibar surface down until the new rubber can be acquired. Benko said the Friends are raising funds not only for the PIP surface but also to improve the walkway toward the play area and overall plaza there.

Devereaux asked several questions related to the nonprofit group’s concerns about the project.

Moynihan said: “Kit’s questions are really raising the issue of: What is the process with public-private partnerships to really make sure that their input and interests are being considered?”

Benko said the two Friends founders are part of an active committee that includes himself, Parks Superintendent John Howe and Sally Campbell, Francesca Segalas and Laura Costigan from the Parks & Recreation Commission.