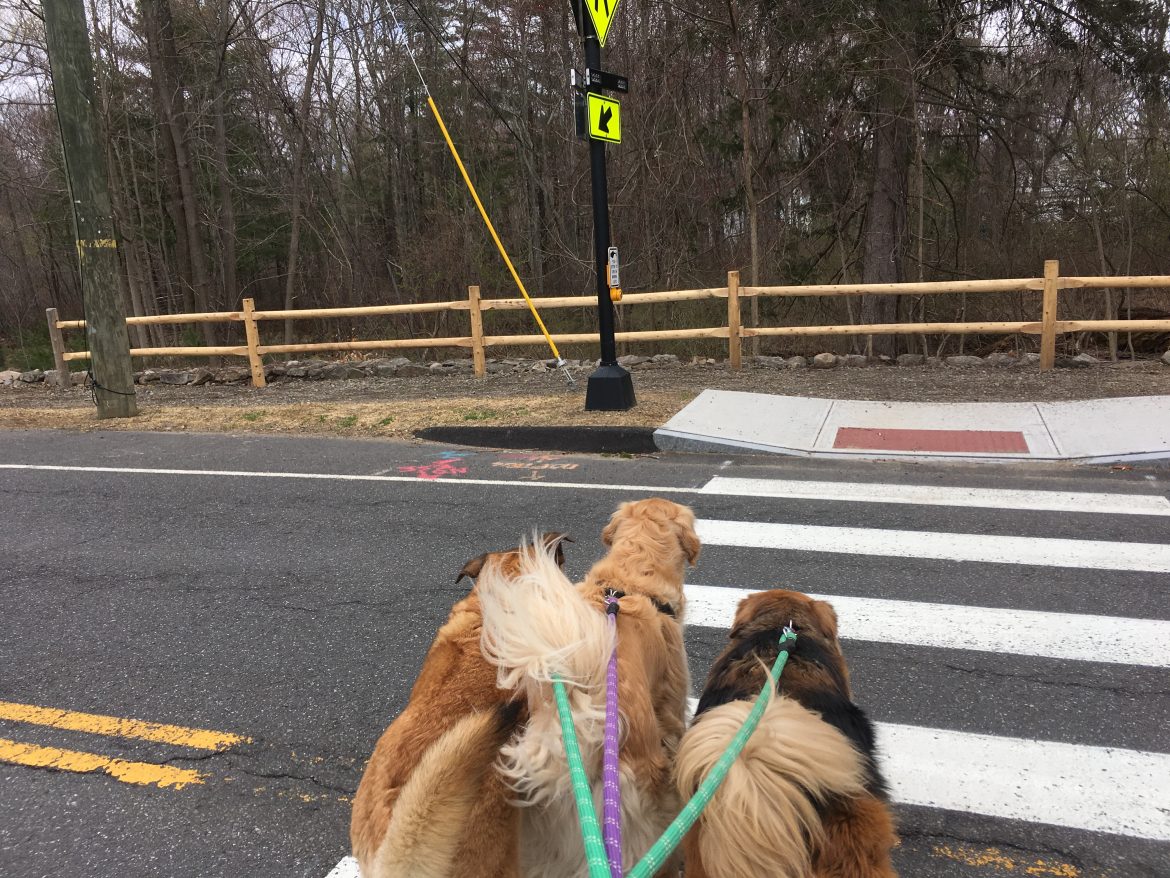 There's a push-button activated flashing beacon for the crosswalk at Weed and Wahackme. Credit: Michael Dinan

The three pedestrian crosswalks in question—at South Avenue and the YMCA, Old Stamford Road and Gower Road, and Oenoke Ridge and the Nature Center—do not meet state Department of Transportation criteria for speed limits and traffic volume, according to Public Works Director Tiger Mann.

Yet the state may still cover the $16,000 cost for installing each “Rectangular Rapid Flashing Beacon” or “RRFB” if the town resubmits the locations as “honorable mentions,” Mann told members of the Police Commission at their most recent regular meeting.

“We don’t have any that meet the criteria right now but we can at least put them on the list and, if you are amenable, go forward at that point,” Mann told the appointed body during its March 17 meeting, held via videoconference. “Each one of these that is requested has been requested by the residents or by our engineering staff, based on what we are looking at and the proposed sidewalk extensions that we are looking at doing throughout town.”

Mann added, “If we can’t get approval from the state, we are planning to extend the sidewalk on Oenoke Ridge to Parade Hill [Road] this year, once we get a DOT permit, and I would like to be able to install that one with town funds if I can’t get DOT funds for it. That one there is kind of paramount. That one and the one at Route 106 and Gower.”

Commission Chair Paul Foley, Secretary Jim McLaughlin and member Shekaiba Bennett voted 3-0 to approve Mann submitting the three locations to the DOT as honorable mentions, as well as a handful of other crosswalk locations on municipal (not state) roads.

New Canaan already has four RRFB’s installed, at Farm Road and Saxe Middle School, Main Street and Farm Road, and Weed Street at both Elm and Wahackme (as part of the Irwin Park sidewalk extension/greenlink project). The flashing beacons are “in essence the best safety measure for mid-block crosswalks or un-signalized intersections for pedestrian safety,” Mann said.

“It’s probably around an 85-92% rating as far as people adhering to it,” he said. “An adherence rating. Other flashing beacons or other flashing signs, they quickly drop off. You put them in, they get a high adherence rate and then pretty soon you are down to the 20% range where people are just blowing through them.”

“Those are two heavily, heavily traveled roads and we have had numerous requests for a crossing guard for the one at 106 and Gower,” DiFederico said. “There is a large contingent of school kids across there and it’s something we have been looking at for quite some time. So I would definitely recommend [those]. And then the one at YMCA we had to wait a long time to get the state to approve the design features and the design of the beacon but now that they have been sorted out, those are ones we have definitely had in the queue for a long time.”

The other proposed RRFB sites are at Kimberly Place and Elm Street, Old Norwalk and Marvin Ridge Roads, Heritage Hill Road and, finally, at Park and Mead Streets.

Foley cautioned against installing so many of the pedestrian-activated beacons that they become less effective.

“We don’t just want to put up a bunch of these all over—and you’re not doing that—just a bunch all over town and people sort of get used to those and you sort of look right through them, too, and then they do not become as much safety devices as we intended and now we’re stuck with these big signs scattered all over the place and that residents just don’t pay any attention to them,” he said.

Mann said the flashing beacons are only activated when the button is pressed and that the flashing continues for 20 to 30 seconds.

Bennett said she’s used the one at Weed and Elm Streets when walking to Irwin Park and that it’s “amazing.”

“We were so happy when that was put in,” she said.

McLaughlin said he supported the request for state funding.

“As you say, we don’t meet the criteria but if they are willing to consider it and maybe give them to us, I don’t have any objection if we think these are necessary safety precautions,” he said.