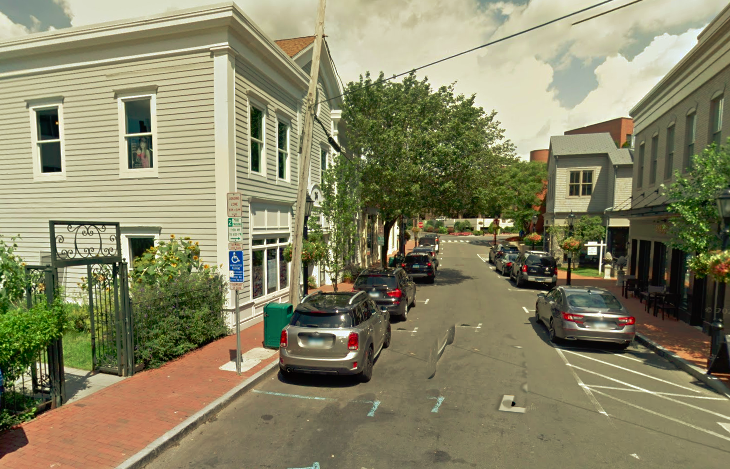 The valet stand was proposed to go on the left-side of the one-way stretch of Forest Street, just past New Canaan Diner. Streetview

Saying they’d heard some voices of opposition from neighbors, members of the Police Commission at their most recent meeting voted unanimously against a proposal to allow a trial-run valet stand on Forest Street.

Residents of the Heritage Square condominiums wrote letters opposing a proposal from New Canaan Valet Services to operate a three-space valet stand on the west side of the street, between numbers 20 and 26 Forest St., according to members of the Commission.

“I am uncomfortable giving up public property on a public street to a private enterprise,” Chair Paul Foley said during the appointed body’s Nov. 17 meeting.

He joined Commissioner Shekaiba Bennett and Secretary Jim McLaughlin in voting 3-0 against a proposal from New Canaan resident Billy MacLeod.

In September, MacLeod had come to the Commission with a proposal for how New Canaan Valet could help local businesses, traffic flow and disabled residents visiting the downtown. A West School parent and member of the local VFW Post 653 as well as the Country Club of New Canaan, MacLeod said his company is fully insured for the proposal and would park vehicles for those with certified handicapped placards for free.

MacLeod also said he had letters of support from five of the seven restaurants on the block, as well as letters from others in town. The Commission put off a vote at its October meeting, in part because it wasn’t clear from Tucker Murphy, a staffer in First Selectman Kevin Moynihan’s office, whether counsel had advised the town against allowing the valet stand.

He said that Heritage Square residents such as Alice Mahoney were “activist neighbors” who in the past have “opposed restaurants to go in below them.”

“These people are being activists and influencing you and it’s coming from a point of selfishness,” MacLeod said.

McLaughlin said the Commission had received four letters of opposition, including two from Heritage Square.

MacLeod questioned why the Commission would deny his proposal before members of the elected Board of Selectmen or Town Council have a chance to review it. The Police Commission, New Canaan’s local traffic authority, under state statute, still would have oversight as to how the valet stand operated, MacLeod said.

“My point is if there is a benefit to community and you are here to serve the community, why you wouldn’t allow it to go past you, to the Board of Selectmen and the Town Council to receive their input?” He said. “Because I’m not going to be parking cars this weekend. But the fact is, there is merit. It would still come back to you. I don’t understand why you would kill it before it has an opportunity to reach their desks, when there is more support for this than there is non-support.”

MacLeod, who attended the meeting in person in the training room at the New Canaan Police Department, could be heard saying, “This seems really weird” three times.