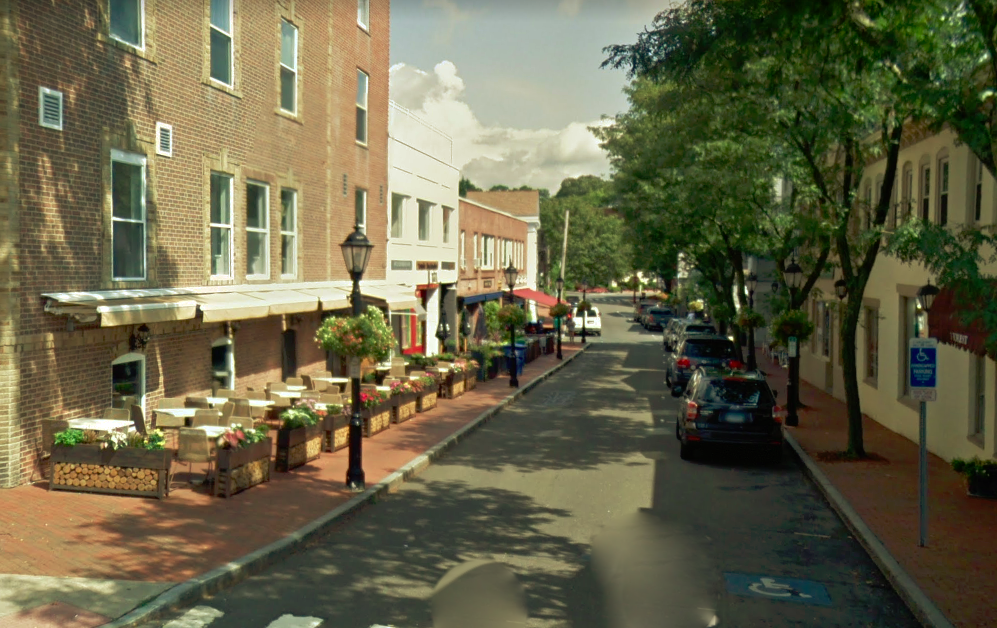 The Police Commission at its most recent meeting put off a yes-or-no vote on a proposal from a New Canaan business owner seeking to operate a valet stand on Forest Street on weekend nights for a trial run, saying there could be legal reasons for denying the request.

Commission Chair Paul Foley during the appointed body’s Oct. 20 meeting that he’s uncomfortable with the idea of “giving up public parking spaces to a private company.”

He addressed town resident Billy MacLeod, who in September came to the Commission with a proposal for how New Canaan Valet could help local businesses, traffic flow and disabled residents visiting the downtown.

Introducing himself as a West School parent and member of the local VFW Post 653 as well as the Country Club of New Canaan, MacLeod said he and his wife, Meredith, are seeking a “short term trial” offering valet services on Forest Street. MacLeod said he would set up a valet stand just past the New Canaan Diner on the west side of street, using three of the 17 parking spaces on Forest for the stand, primarily for those seeking to dine out, on weekend nights. MacLeod said the company is fully insured for the proposal and would park vehicles for those with certified handicapped placards for free (the proposal comes as federal officials investigate a complaint against the town of ADA violations).

MacLeod said a four-person team of valets would not only park cars but also would usher along motorists who double-park or illegally seek to use one of two disabled spaces on the street.

“That alleviates some bottleneck there on that street, because people can pull in and park their car,” he said.

MacLeod said he has secured letters of support from five of seven restaurants on Forest, and would effectively turn the three parking spaces into dozens of spaces. A private property owner on Cross Street has agreed to work with New Canaan valet and allow the company to use a commercial lot there for parking the cars, MacLeod said. Area towns such as Greenwich already have contracts with private valet companies using on-street parking spaces to accomplish the same goals, MacLeod said.

At the end of the MacLeods’ September presentation to the Commission, it was agreed that the first selectman’s administrative officer, Tucker Murphy, would speak to the town attorney about the proposal.

But Murphy left the Oct. 20 meeting prior to the agenda item dealing with MacLeod, in order to help run a simultaneous meeting of the Town Council.

Citing a conversation Murphy, New Canaan Police Deputy Chief John DiFederico said during the meeting, “I talked to Tucker today, too, and she spoke to the town counsel, the town attorney, and we can’t.”

He added, “We spoke to our town attorneys and they said we should not do this.”

MacLeod responded, “I appreciate that very much, officer. I did speak to Tucker this afternoon, and she did relay to me the fact that she had a conversation with the attorney and he wasn’t sure.”

It wasn’t immediately clear why the two appeared have received different messages.

In an email that MacLeod sent the following day, obtained by NewCanaanite.com through a public records request, MacLeod referenced an phone call he had after the Police Commission meeting with Town Attorney Ira Bloom where he “received a very different story” than what DiFederico and Foley had relayed during the meeting.

He continued, “Remember this was all based on an open session suggestion by Tucker Murphy back in September. You did say that someone brought up valet parking, that you recalled that, but that was it. The more I think about it the less it makes any sense. I personally feel for [Deputy] Chief DiFederico because he was insistent that Tucker said town attorneys said no to our request, not allowed. I am not sure how this all plays out, but something is not adding up.”

Murphy herself earlier in the day had sent an email to Bloom, copying only Foley, saying she wanted to “clarify my conversation with Billy Macleod yesterday afternoon.”

“I simply explained that after consultation with the town attorney, I was told that the process fo rpaprovinf the use of town property for this type of us could potentially require a public hearing (multiple hearings possibly) and that the Police Commission needs to determine next steps at their meeting,” Murphy said in the email, obtained by NewCanaanite.com though a public records request. “I advised him to attend the Police Commission meeting last evening in order to further the discussion regarding his request and respond to any questions they may have.” (It wasn’t clear whether the possible “public hearing” Murphy referred to was a simple “municipal improvement” approval from P&Z or something more involved.)

During the meeting, MacLeod said that the New Canaan Valet trial proposal for Forest Street is “well within” the town’s guidelines and Charter.

Foley responded, “I know the Charter of this town pretty well and it’s not within the Charter.”

MacLeod said, “I have looked at the Charter. I don’t see where it’s excluded anywhere.”

MacLeod asked, after having his own attorney review the town’s governing documents, “if we were able to find that it was allowable under certain circumstances, would your opinion be different?”

MacLeod noted that the three spots he would seek to use are for diners looking to patronize the Forest Street restaurants where Cava, Gates, Tequila Mockingbird, New Canaan Diner and Locali already are supportive of his business concept.

Though the Commission’s meeting agenda called for a vote on the New Canaan Valet request, the three-person group ultimately decided to table the item.

To MacLeod’s request for the ability to present the idea again, Commissioner Jim McLaughlin said, “If our town attorney advises us in a definitive way that it’s not permitted, then I don’t think it’s going to make sense for you to come with a different opinion.”

13 thoughts on “‘Something Is Not Adding Up’: Owner of New Canaan Valet Seeks Clear Answer on Forest Street Proposal”