With the new sidewalk on Weed Street connecting Elm Street to Irwin Park earning high praise and wide use from residents, town officials say they’re eager to ensure that pedestrians are safe in crossing the busy north-south road. 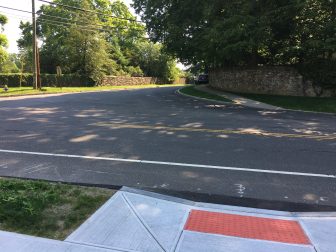 Crosswalk striping and a push-button activated flashing beacon will be installed at Elm and Weed Streets, to ensure safety for pedestrians crossing to a new and heavily used sidewalk. Credit: Sam Stoner

An early plan to put in stop signs for Weed Street traffic at Elm garnered pushback from some concerned about traffic backup. Instead, Public Works Director Tiger Mann said, the town will install a crosswalk at Weed and Elm as well to help pedestrians access the new sidewalk. The town also will put in push-button activated flashing beacons that alert motorists to a pedestrian using the crosswalk, he said.

“There’s one at Saxe right now across from Farm Road. That requires Connecticut [Department of Transportation] approval, so we’re seeking approval for that installation,” Mann told NewCanaanite.com. “The moment that that gets approved, then we can go to the selectmen for an award of a contract to purchase, so in the interim, we’ll put up standard pedestrian signage until we can actually get that approval made.” 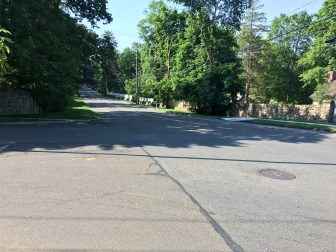 Crosswalk striping and a push-button activated flashing beacon will be installed at Elm and Weed Streets, to ensure safety for pedestrians crossing to a new and heavily used sidewalk. Credit: Sam Stoner

Locals have called the new sidewalk along Weed a big improvement over the stretch of grass that had previously been used to walk between Elm and Irwin.

The sidewalk forms part of what open space advocates have called a “greenway”—a walking loop that picks up in the northeast corner of Irwin Park, at Wahackme, where another crosswalk will bring pedestrians to the east side of the road, and a sidewalk will lead into the woods, where a path will connect Weed Street to the New Canaan Nature Center property on Oenoke Ridge Road.

While there will be a crosswalk at the corner of Weed Street and Wahackme Road, the town has no plans now to put in a rapid rectangular flashing beacon there.

“We’ll see what the usage is to get to the Land Trust land and over to the Nature Center,” Mann said. “Right now, the trail hasn’t been formalized or anything, so right now we’re gonna hold on that one. We’re gonna install the striping, install the standard signage, and then wait to upgrade based upon usage, since there is a marked increase in cost between the standard signage and the beacon itself.”

The crosswalks and standard signage will both be installed within a month, but the town must wait for Department of Transportation approval before requesting funds for rapid rectangular flashing beacons.

Mann said that the town has a $150,000 grant from the state Department of Economic and Community Development to help in funding the project.

“We are working towards completing that or using up all those funds before town funds will come into play, so state funds will assist with the striping,” Mann said.

If the rapid rectangular flashing beacons are approved, Mann said that town funds may need to be used to help cover their costs.

“Based upon the cost of the RRFB, the beacons, there’ll have to be some town money used as well, just because we’re gonna trip over the $150,000 mark, so we’ll have to augment it with town funds,” he said.

2 thoughts on “Town To Install Pedestrian Crosswalks, Flashing Beacons at Weed and Elm”