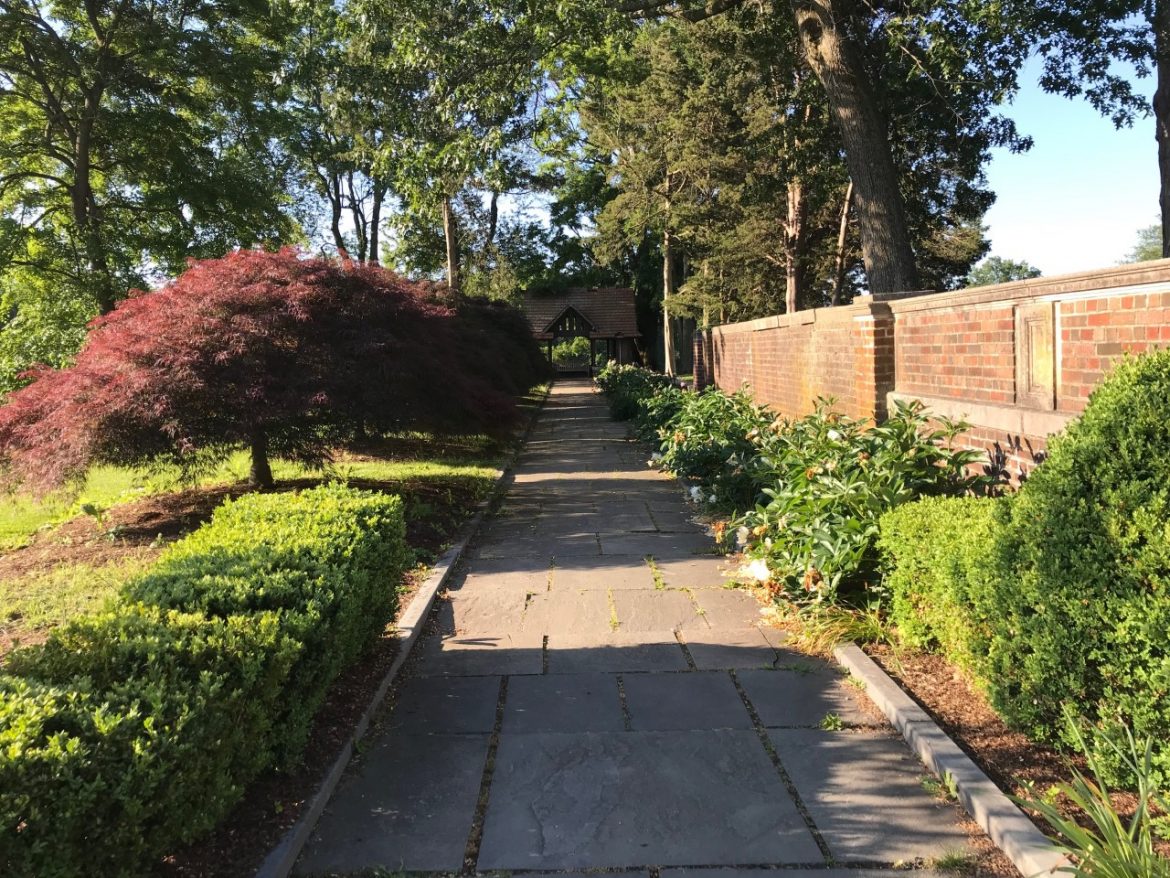 The town official charged by state statute with caring for New Canaan’s public trees is at odds with a local volunteer group that’s eager to remove several Japanese maples from a walkway near Waveny House. 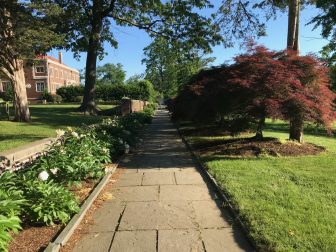 The town’s tree warden thinks the maples planted along one side of the path that runs between the gazebo and fountain at the top of the sledding hill “are absolutely beautiful,” Public Works Director Tiger Mann said during the June 9 Parks & Recreation Commission meeting.

Referring to a New Canaan Garden Club proposal to replace those trees with a long bed of peonies and flowering plants, Mann added, “He understands your desire to have that, but he also feels that he answers to the other 20,000 residents in the town and he doesn’t see any good reason why they should be removed at present.”

The comments followed a presentation by representatives of the Garden Club and Waveny Park Conservancy, as well as their landscape designer. Removing the Japanese maples would open up a nice view of the hill and pond below, would create more symmetry with the peonies already on the west side of the footpath and would be a better photo opportunity for people getting married at Waveny, according to Conservancy Chair Caroline Garrity and Kathryn Herman of New Canaan-based Kathryn Herman Design, LLC.

“It would be very stunning to have this incredibly long walk that was unified on both sides of the walk with this really beautiful display,” Herman said during the meeting, held via videoconference. “We feel like this would be a very successful design.”

Yet some members of the Commission voiced concerns about removing the maple trees (see below), and in any case, Tree Warden Bob Horan “is not in favor” of the Garden Club’s plan, Mann said.

“He has the final say,” Mann said. The public works director added that he himself forwarded the Garden Club’s plan to Horan, and that no one else had even consulted the tree warden prior to seeking Commission support for the project.

Garrity, who also is a past president a current member of the Garden Club, said that “it would be great if we could meet with him [Horan] over there and maybe go through it with him.”

Mann responded, “It might have been nicer to send him the plan directly, but yeah, you can certainly meet with him.”

Horan was not in attendance at the meeting.

When the Garden Club member who is leading the replanting plan, Tori Frazer, said that “seeing that plan on its own is very different than talking through what the vision is and how it would enhance the entrance,” Mann responded, “I think he’s well aware of what the proposal is, but you can certainly meet with him.”

“I can’t speak for him but he’s never been opposed to meeting with anyone on any tree issue, ever,” Mann said. “So that’s a phone call or an email.”

Though the Garden Club had been seeking the Commission’s support at the meeting, the appointed body decided to wait one more month before taking a vote on the nonprofit group’s proposal.

“I think we are better off waiting,” Commissioner Matt Konspore said. “That way we dot our i’s and cross our t’s here.”

The commissioners asked whether photos of the area that formed part of a presentation were taken recently (yes), how many trees would be removed (all of them, including those north of the fountain), how long peonies are in bloom (about four weeks, depending on the varietal), whether there’s a plan to protect the peonies on the east side of the walk, given that those already in place are protected by a wall (there would be a cut edge in the turf, perhaps with mulch), where the Japanese maples would get transplanted to if the plan goes through (they’d be transplanted when dormant in winter, at a cost of about $5,000 per tree, though such transplants are never guaranteed because there’s always risk, and they could be sold), what the peonies-and-nepeta beds would look like when the flowers are not in bloom (the nepeta has a long bloom and is hearty) and whether existing peonies would be removed in order to coordinate colors (no).

Some Parks & Rec members said they liked the plantings along the path the way they are.

“I went to Waveny today and I looked down from the top of the path and then upward from the hut, and for me at least the maples are stunning and elegant, the color is just really pretty amazing,” Commissioner Hank Green said. “And I understand the reason for the appeal of classical symmetry, but I think what this plan would do would really create just a long bed of flowers that bloom for a month, at the expense of Japanese maples that I think are stunning and elegant for most of the year, and I’m not sure that’s a good tradeoff. I understand what you are saying about the vista, but I think people will be able to find the view even if the maples stay where they currently are.”

Commissioner Francesca Segalas said she especially likes the maples in the wintertime when they’re blanketed with snow.

Commission Gene Goodman said, “I kind of like the maples, and I understand ‘welcoming and balanced,’ but there are other words that could be used to describe in a positive way the Japanese maples, as well. Personally I would like to get back there and take a look before I feel more definitive about that. But I certainly am hesitant to just—I always enjoy those maples and make a tunnel toward the end, as well. That has its plusses.”

During the presentation, Garrity referred to the gazebo as a “belvedere,” a term more commonly associated with structures that are attached to houses, rather than freestanding, and referred to the footpath that runs north from it as “the peony walk.” She said that Herman has won awards and appeared in print publications, that the Garden Club and Conservancy contribute volunteer hours and money, signaled that the Club would seek to replace a 1912 Moroccan-style gate at the north end of the walk, and described the new plantings as the third and final piece of larger improvements to that part of Waveny, along with the walled and parterre gardens nearby.

“I believe Mrs. Lewis Lapham, owner of Waveny, one of our club’s founding members, and a past president would be very proud and pleased by what her club has accomplished in these formal gardens,” Garrity said. She referred to Antoinette Lapham, who along with her husband, a founder of Texaco, hired and worked with the Olmsted Brothers firm (successor firm to Frederick Law Olmsted) to lay out Waveny after buying the property in 1904 and having Waveny House built eight years later (finished in 1914).

“This area of the park really is quite special and a favorite spot of many visitors and brides,” Garrity said. “We feel that by adding the new bed of new peonies and nepeta that we will complete the full restoration of these three garden areas and bring symmetry, new vistas and color from the parterre garden down through the peony walk and into the walled garden. This project will complete the final link in the formal area of the park.”

Mann asked for clarification as to whether the original plan for the walkway included peony plantings, and was told that it did not. (The Garden Club in winning approval in late-2017 for its redesign of the parterre garden faced opposition from professional landscape architects who wanted to preserve the original Olmsted plan for Waveny.)

The new planting plan would cost $10,000, Frazer said. The Garden Club and Conservancy would split the cost, she said.

Parks & Rec Chair Rona Siegel said the Commission could hold a vote just to inform Horan of its position with respect to the planting proposal.

Mann said that Horan “would hear from facet of the community, especially the commission that oversees the park.”

“But as far as the statute goes, there’s no ambiguity,” Mann said.

He referred to Section 23-59 of the state statute, “Powers and duties of tree wardens,” which says, in part, “The town or borough tree warden shall have the care and control of all trees and shrubs in whole or in part within the limits of any public road or grounds and within the limits of his town or borough, except those along state highways under the control of the Commissioner of Transportation and except those in public parks or grounds which are under the jurisdiction of park commissioners, and of these the tree warden shall take the care and control if so requested in writing by the park commissioners.”

Recreation Director Steve Benko said that since the planting itself would not take place until the fall, it might be best to “let Bob talk to the group and see what their opinions are and bring it back to the Commission at the  next meeting to talk about voting on it, so we are not it forcing down his throat.”

Garrity responded that “we were never trying to push it down his throat, I object to that term.”

“I would never think of doing something like that,” she continued. “We are here to try and improve the park and we are not trying to ruin it. But anyway, yes, we can meet with him. I was hoping for a vote because we need to order the peonies and can think about preparing the beds.”

Commissioners Green and Laura Costigan thanked the Garden Club for its presentation. Green, while lodging his concerns about the plan, called the Club and Conservancy “treasures” for the park and town.

When Mann noted that a Google search for wedding photos at Waveny showed a couple walking down the path as-is. Garrity said that such photos also exist with newlyweds in the parterre garden.

“I think people have to keep an open mind,” she said.

Mann responded, “I don’t think that his mind is closed, Catherine.”

When Garrity said that the Garden Club plants trees “all the time,” Mann noted that the tree warden has always worked hand-in-hand with such organizations.

Garrity said that Japanese maple trees should be planted on their own, “not in a whole row.”

“That’s never the way they’re planted,” she said. “So that’s another facet of it.”

Konspore said that between now and the next Parks & Rec meeting (July 14), officials should try to figure out why two of the Japanese maples died. Garrity tried to say that they could be diseased, but Benko corrected her, saying a large maple tree fell on the two maples when it came down during Superstorm Sandy.