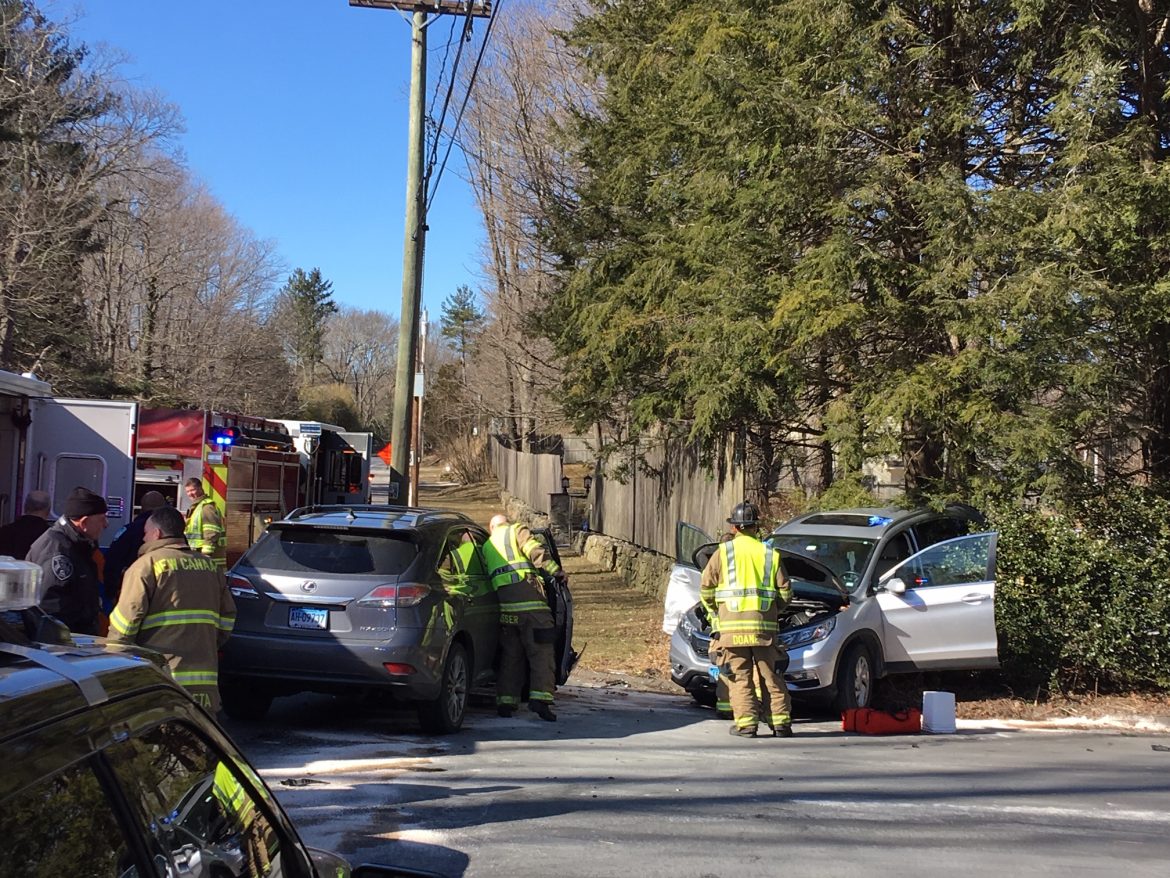 The scene of a two-car crash at Michigan and Smith Ridge Roads on Feb. 28, 2019. New Canaan Credit: Michael Dinan

Three individuals involved in a two-car crash Thursday afternoon at the intersection of Smith Ridge and Michigan Roads were taken to Norwalk Hospital’s emergency room with minor injuries, according to police.

Emergency responders were called to the scene at approximately 1:53 p.m. on a report of a car crash with injuries.

There, they found two cars with their front ends damaged: a Lexus hatchback nosed toward the northeast corner of the intersection and a Honda wagon pushed into a property on the same corner and facing south, as though it had been struck and traveled backwards. 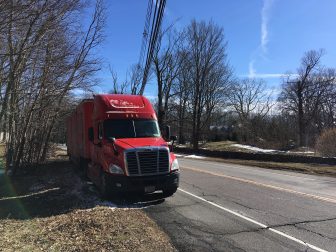 Motorists seeking to nose out of Michigan Road while traveling westbound toward Smith Ridge Road had the sightline obstruction of this out-of-state tractor-trailer moving truck to contend with. A two-car crash occurred at the intersection on Feb. 28, 2019. Police said the tractor-trailer has been parked here for two days. Credit: Michael Dinan

It isn’t clear what caused the crash, though the operator of one vehicle was cited for failure to obey a stop sign, according to police.

In addition, a large red tractor-trailer parked just south of the intersection along the east side of Smith Ridge Road effectively blocked sight lines for northbound motorists as well as any vehicle traveling west on Michigan Road from North Wilton Road, where drivers would need to nose out into the intersection before turning in either direction or crossing Route 123—a dangerous proposition even without a large obstruction such as the truck.

The tractor-trailer had Wisconsin plates and the letter on its cab said Merchants Delivery & Storage Co. from Racine, Wisc. A police officer on scene said the truck had been there for two days. 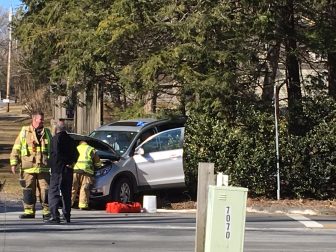 The scene of the crash at Smith Ridge and Michigan Roads on Feb. 28, 2019. Credit: Michael Dinan

[Note: This article has been updated with information about the injuries sustained by those involved in the crash as well as an infraction summons issued to one motorist.]