Waveny visitors benefitting from a nonprofit organization’s efforts to improve trails at the popular park soon will have another new footpath to enjoy.

The Waveny Park Conservancy’s long-standing plans to upgrade pedestrian paths alongside the main road through the park, from South Avenue to the main house, soon will be completed.

“The old trails there are very worn down and basically dirt trails,” Conservancy board member and Parks & Recreation Commission Chair Sally Campbell said when asked about the project.

“These new ones give it a good surface that can take a beating and helps runners stay out of the mud and tree roots, things like that,” Campbell said. “They’ve been very well utilized and well received by the public.” 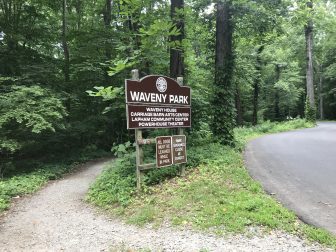 The new trails will connect the entrance to Waveny from South Avenue all the way down. Credit: Catherine Gorey.

The Board of Selectmen on July 10 unanimously approved a $45,800 contract with a New Canaan-based landscaping company to finish the final stretch of the trail, meaning park-goers starting at South Avenue can use it all the way into Waveny. Public Works Director Tiger Mann said at the meeting that the footpath would run east of the culverts to the South Avenue entrance

Funding for the project comes from the Conservancy. The organization’s mission is to “work in partnership with the Town of New Canaan, to ensure that Waveny Park thrives in perpetuity, and continues to inspire and serve the people of New Canaan forever.” 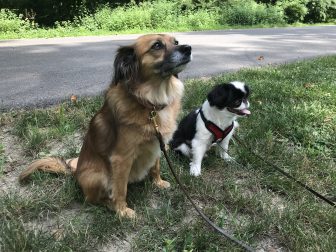 The group has big plans for the park, with multiple projects planned over the coming years, including a major one, now underway, at the former “cornfields,” and another to come at Waveny Pond.

The new trails are also a favorite of athletes that use the park for training. Darien resident Kitty Crosby, who comes to Waveny for her daily jogs, said the new covering is “better for knees and hips, which are sensitive areas for a lot of runners.”

“I’m excited they’re putting so much effort into the trails,” Crosby said. “It helps make the park more accessible and enjoyable for everyone.”

2 thoughts on “‘It Helps Make the Park More Accessible’: Remade Trails at Waveny Near Completion”