Kera Townshend, a former captain of the New Canaan High School cheerleading squad, gave a glowing description Wednesday of her accomplishments and life in this town and then in college, with plenty to impress admissions officers, job interviewers or any audience.

Then she gave the audience of well over 200 New Canaanites — at a panel discussion in Town Hall about heroin, opiod and general drug abuse — the seamy underside: Anxiety and, in some areas, lack of self confidence and wanting to get along, led her into some sordid drug and alcohol abuse and addiction. Addictions which stuck even after she thought she’d conquered them.

Townshend was one of several speakers discussing opioid, heroin and substance addiction in general at a panel discussion that packed the community meeting room at Town Hall. It was organized by the League of Women Voters of New Canaan.

Heroin has killed several young people from New Canaan in recent years, town officials have acknowledged, and a cross-community coalition that includes police and district representatives have undertaken the task of ensuring that public schools here are drug-free as part of a wider effort to rid the town of narcotics.

Police Chief Leon Krolikowski spoke about the department’s greater focus on substance abuse and addiction, also on the panel were his department’s New Canaan High School resource officer, the head of a Westport counseling agency for teenagers, the clinical director of Silver Hill Hospital’s outpatient programs, and another recovered addict who is also a counselor. 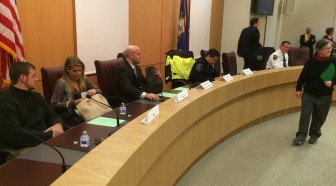 Townshend saw friend after friend from her New Canaan teen years destroyed by the substance abuse that had become so central to her life. After enough deaths, she did put it behind her: Since the spring of 2014, Townshend said, she’s been sober — off of alcohol, marijuana and illicit drugs. She’s had the support of family, friends, counseling, medication and, at least at some points, attending a 12-step program.

At Saxe Middle School, Townshend was the 8th Grade co-class president, a lacrosse player who was also active in an art program and took a dance class. In 9th grade, she was on the cheerleading squad and the honor roll. By senior year at New Canaan High School, she was captain of the cheerleading team, belonged to a number of school clubs and groups and was active in her church. She received a school spirit award from the Lions Club.

“I’m not someone who looks like a stereotypical addict or alcoholic,” she said. 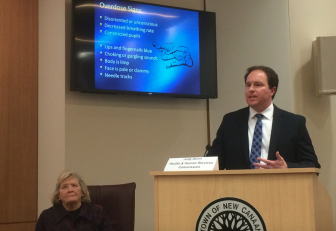 Her college years also has plenty of activities for a glowing resume: At Gettysburg College she was active in her sorority (named a “sunshine fairy” and active in membership recruitment); she studied abroad in London and then in Italy. She studied writing at New York University one summer and worked at an advertising agency in New York City.

Then there was the underside.

“I had my first drink with my friends in the eighth grade,” she said. She stole alcohol from her parents, put alcohol in water bottles and drank at parties, sometimes at her home when her parents were away. She experienced blackouts. At one point just after her freshman year, she and her parents were out of town when her parents received a call from New Canaan police: Some of Townshend’s friends had broken into her house and had a party that “escalated.”

After those friends got in trouble, she was worried that they would dump her. Just before her sophomore year started, she attempted suicide. She started getting counseling from a psychologist once every three weeks. In her sophomore year she tried harming herself, promiscuity and binge drinking.

“My school life revolved around drinking,” she said. “I don’t know how I didn’t end up in the hospital or with a DWI.” Her parents grounded her a lot. She snuck out a lot.

In college she continued binge drinking, smoking pot and taking other drugs. Blacking out was almost the goal she and her friends gave themselves. By her junior year, she said, “my addiction caught up with me. I would isolate and just stay in bed until I’d go out with my friends.” She found that she didn’t like cocaine — it made her feel too sober.

She stopped going to classes. The student dean called her parents to say that Kera didn’t show up for finals. Kera got a call from her father. He said that he and her mother didn’t need to know what was going on, they just wanted her to come back home.

“That was the greatest thing,” she said, because she had started thinking about suicide. Back home, she saw a psychologist and took anti-depressants, but kept drinking, even while taking a semester off. At about that time she first lost a friend who died after driving drunk. She started attending 12-step meetings, but swearing off drinking didn’t work yet, and her drinking progressed.

Then she lost a close New Canaan friend to an overdose. On Dec. 6, 2013, she took her last drink and started regularly attending a support program. “I thought I was sober,” she said, but she was still smoking pot. “I was self-medicating.”

In the spring of 2014, she ended all substance abuse, she said. Last July she lost a third friend. “We were going to meet up — we talked two weeks before his overdose,” she said.

Nick deSpoelberch, 37, a Darien resident who grew up in Rowayton, had abused alcohol and various drugs when he was an adolescent, and continued doing so, on and off as an adult, when he became first a counselor and finally dean of students for a prestigious New York City private school.

For a while — years — he was able to do his job even while eventually taking more and more opiates and, eventually heroin, until, in the month before his arrest, he was repeatedly getting into car accidents. Finally, he started driving to see his drug dealer in Greenwich and found himself waking up inside his car as a police officer banged on the window. In Wilton.

His arrest made headlines in New York City and Connecticut, and even his young son, on his fourth birthday, was confronted by news reporters at the front door of his home. The arrest, and the treatment and counseling he received afterward, brought him back to sobriety and kept him there since Dec. 6, 2013, he said.

At first, the drugs and alcohol can take away emotional pain, even if only escaping from them for a while, deSpoelberch said. With heroin and opioids, he said, by the time you realize “it’s got you, you’e too far gone.”

(deSpoelberch spoke much more about his own experience last November at a similar forum in Darien.)

For an addiction, said Vince Benevento, who founded and directs the Causeway Collaborative counseling agency in Westport, “we’re talking about an illness — this is an illness. This isn’t a flippant condition. This is longstanding behavior intervention and this is lifelong support for someone who is afflicted with this illness.”

Dr. John Douglas, clinical director of Silver Hill Hospital’s outpatient addiction program, said it takes a combination of counseling therapy (sometimes in the form of group therapy) and medication to get someone off of a heroin or opioid addiction. (Opioid drugs of various types, he explained, are derived from heroin poppies or are chemical copies of them.)

(Douglas spoke in detail about the problem of heroin and opioid addiction — which he said is growing and has gotten more deadly than motor vehicle accidents in the United States — at the November forum in Darien.)

Douglas, Benevento, Police officer Jason Kim (the school resource officer at New Canaan High School) and Krolikowski (the police chief) all made the point that parents need to make it clear to their adolescent children that the parents expect them not to use drugs, and they have to enforce discipline rules related to children staying away from situations where drugs are taken.

“Just wanted to offer another opinion,” she said, adding, “I’m not a parent.”

3 thoughts on “What Drug Abuse and Addiction Look Like in New Canaan: A Panel Discussion”