Saying there’s no evidence of a hardship that would warrant a one-off exception from the New Canaan Zoning Regulations, town officials on Monday night told the owners of a Welles Lane home that they would deny an application for a variance to create a covered patio. 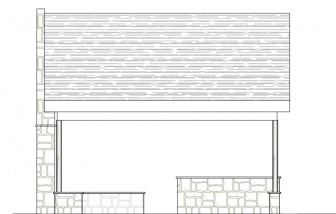 Though the Zoning Board of Appeals did not formally vote down the application for 54 Welles Lane, the appointed body’s members told homeowners Altin Tirana and Jorida Banda that they should figure out another way to get a covered 530-square-foot patio on the 2.15-acre property.

“Unfortunately, our hands tied because these are town ordinances,” Chair Laura Edmonds said during the meeting, held via videoconference. She referred to what’s required for a variance as well as what counts toward building coverage, under the Zoning Regulations.

The homeowners’ plan for a covered patio—with an outdoor cooking and seating area—would put their home, already over coverage by nearly 500 square feet, about 1,000 square feet over what’s allowed, according to the town planner. Though an uncovered pergola in that spot would require no approval, a roofed structure such as the one the applicants proposed likely would require the homeowners to “subtract enough coverage” from the property first, Board Secretary John Mahoney said.

Tirana and Banda had said in a letter that formed part of their application that they face an “unnecessary hardship” as a result of “zoning guidelines changing after the construction of our home.”

“As New Canaan residents for more than 13 years and as present owners of more than one residential property in our wonderful town, we have a strong interest in a thriving future for the town which we call home and where [we] have been raising a family for more than 10 years,” the letter said. “Approval of our variance application would not only help to address the unnecessary hardship that we are facing, but it would also help in increasing the value of our home, which, in turn, would make a contribution to the strong local real estate market and would also contribute to the economy.”

One neighbor wrote a letter in support of the application, calling Tirana and Banda “courteous and thoughtful” people who “have contributed to the positive spirit on our street.”

Yet, in responding to questions from ZBA member Ben Bilus, the homeowners noted that they purchased the house 18 months ago. The Zoning Regulations haven’t changed since then, Bilus said, and so they had an opportunity to know what was allowable on the property at the time they acquired it.

Tirana indicated that the after-effects of the murder of Jennifer Dulos, who also lived on the Welles Lane cul-de-sac, represents another hardship.

With “certain events that transpired on our lane about a year ago,” he said, “traffic has increased considerably and now our home is noticed.”

In the past, it was easy to sit outside on the current patio and have privacy, but now “there are cars that come and go almost every few minutes and some stop and stare and we have young kids and it’s kind of not easy to deal with,” he said.

ZBA members asked the homeowners whether the area could be screened for privacy such as with trees (no it’s not practical), whether plans for the patio include a full outdoor kitchen (a grill but no sink), whether they’d be OK with no roof on the patio (it’s not ideal because that would limit its use) and whether they’d look into getting a pergola with a retractable roof, if that’s allowed (yes).