Anchored by a popular, special installation, the Philip Johnson Glass House in September set a new high-water mark in visits for a single month since opening to the public in 2007. 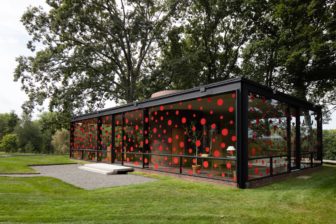 The National Trust for Historic Preservation site welcomed 2,595 visitors to its iconic 49-acre campus on Ponus Ridge last month (by way of shuttles from Elm Street), primarily through tours, according to the nonprofit organization. The figure marks a 111 percent year-over-year increase for visits in the month.

It likely had to do with Yayoi Kusama’s “Dots Obsession” installation, which closed last week, while the artist’s “Narcissus Garden” and “Pumpkin” installations will run through Nov. 30, the season’s end, according to Christa Carr, communications director at The Glass House.

“It generated a huge amount of interest all over the world, locally and regionally,” Carr said. “It basically sold out before tickets were up.”

Here’s a look at visitor numbers at The Glass House over the past two years:

Visitors who attend the exhibition during this period were drawn to the unique experience of seeing the world through the eyes of both Johnson and Kusama simultaneously.

“It shows the programming was a draw,” Carr said. “Nobody wanted to miss it.”

Backed by Carr and Deputy Director Scott Drevnig, The Glass House has been led for one year by Executive Director Greg Sages. Hired originally as finance manager and with a background in construction, Sages put a new focus on fundraising and capital needs at the site. In January, Sages and The Glass House came to the New Canaan Planning & Zoning Commission seeking a modest expansion of hours and operations. Following several public hearings at which some neighbors voiced opposition and several community members expressed support, The Glass House won P&Z approval in May.

Asked about how the modified permit may have affected attendance at The Glass House this fall, Sages said that the “timing of the approval did not allow us to take full advantage of its provisions during our current tour season.”

“It did, however, allow us to increase attendance at our Annual Fundraiser held in June from 250 persons to 400 persons. As a result, the fundraiser set a record for both revenue and net result available for maintenance and preservation of our 14 structures on 49 acres and our museum quality collection of contemporary art. We will also be able to hold a post tour party for attendees of our Philip Johnson House Tour in October, a celebration of our 10th season of operation as a public museum and the 110th anniversary of Johnson’s birth.”

For the current tour season, then, the permit modifications “led to more than $100,000 of incremental revenue,” Sages said.

“This is significant to the Glass House preservation efforts. Our expectation for the next few years is that the permit modifications will allow us to raise a multiple of this year’s result.”

At the final public hearing for the modified permit, P&Z commissioner Laszlo Papp objected to a reference to the Glass House’s plans as “institutional creep,” saying it set New Canaan off “in the wrong direction.”

“I would personally not call these entities ‘institutions.’ I would call them ‘public entities.’ Why? Because I think a town like New Canaan is not a number of houses or residents. It is also the activities these residents conduct in various ways, whether it’s schools or the YMCA or a museum or whatever—so the ‘institutional’ designation implies that these are alien bodies inserted into the residential neighborhoods, which is not true, in my view. I have even more problems with the word ‘creep.’ I assume ‘creep’ means some increased activity by these entities. And again, the life of any organization or any town or any community, means evolving and changing. The ‘creep’ in my view is a somewhat derogatory description of that activity. If we call it ‘institutional creep’ then we can cite some institution or public entities which preceded the surrounding neighbors after these entities were already established and some of them even before zoning was instituted—and we don’t call it ‘residential creep.’ This kind of designation makes absolutely no sense, in my view.”