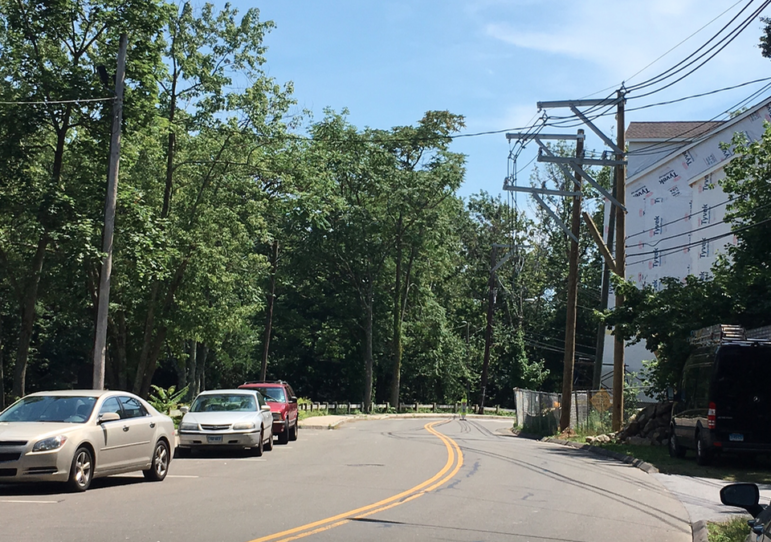 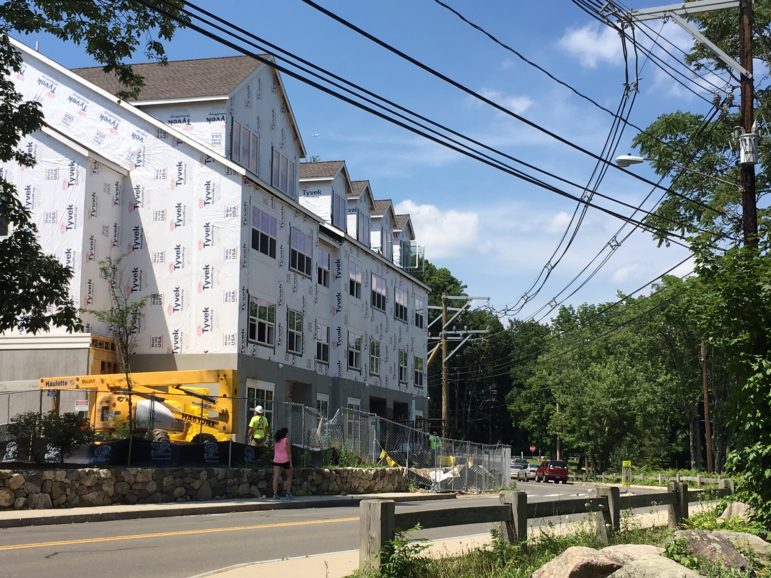 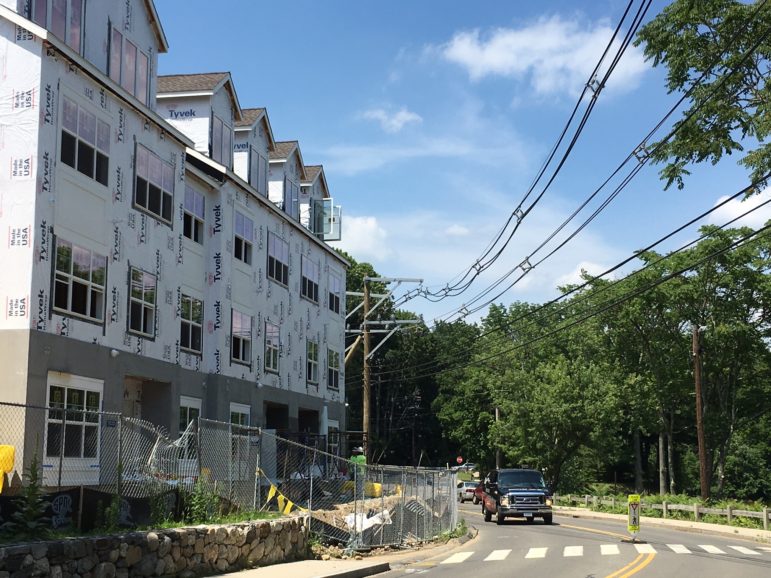 Though neighbors of the public housing development at Mill Pond and at least one member of the Planning & Zoning Commission had voiced concerns about the height and aesthetics of proposed four-story buildings there—concerns that some now say were well-founded, as the units take shape—the new structures will look better once they’re finished with stonework, balconies, trim and landscaping, the project’s architects say. 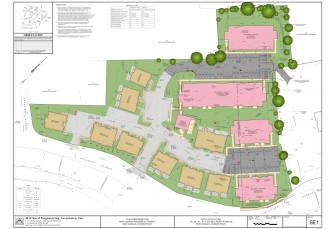 Site plan for Millport Avenue rebuild. The pink areas at the bottom-right are “Phase One” of the project, where 33 units are now being built. Phase Two of the project, located in the two pink-colored areas at the top, calls for 18 units to be razed and 55 installed. Photo courtesy of Jonathan Rose Companies

At least as importantly, given the need for elevators and the challenges of expense and space that they bring—particularly when dealing with affordable housing—going “up” in height and leveraging density is an economic and architectural reality, according to Scott Hobbs, chairman of the New Canaan Housing Authority Commission.

“In the case of affordable housing, it is especially tricky because it is hard to make it work economically even with seed money from the town and grants from the state,” Hobbs told NewCanaanite.com.

“It’s still hard to make it work and you need to get to density, otherwise you cannot pay for the construction. At the end of the day four stories, while large, is still within what is acceptable. I think in modern urban planning and suburban planning there is a recognition that density is not necessarily bad, and with that it is to get same number of units you would have to go ahead and cover a lot more space or concentrate the units and have more green and open space. So this is a national trend that’s been happening for a while and if people want to live closer to town and less walking distance and be in close, moving to four stories is really a logical and mandatory thing that has to happen.”

He spoke as rumblings sound in some quarters of New Canaan, including at public meetings (Hobbs said the complaints have only reached him secondhand) regarding the way in which the new four-story structure closest to Millport Avenue looms over the street, especially from the East Avenue approach.

At a recent public hearing before the Planning & Zoning Commission regarding another proposed four-story building in New Canaan, town resident Jack Trifero argued against the new project, saying that it would make larger buildings more prominent.

“I think we all have buyer’s remorse going down [Millport Avenue] and seeing what was built there,” Trifero said at the June 28 P&Z meeting.

Yet the building in question—a four-story structure with 18 units and 30 bedrooms—conforms to what P&Z approved following an application by the Housing Authority nearly two years ago and multiple public hearings.

Marked by a groundbreaking ceremony this spring, this phase of the project—creating 33 new units, with 40 more to come—took months to develop and secure town approval.

To get it done, the property owner and applicant—the New Canaan Housing Authority—required text amendments to the town’s Zoning Regulations.

P&Z in January 2015 unanimously approved the new “Millport Housing Zone” (see page 100 of the Zoning Regulations here) and shifted parts of a newly combined 4.47-acre property into it from their original B Residence and Multi-Family Zones.

The Millport Housing Zone includes a maximum total height of 50 feet, maximum of four stories and a minimum front yard of 10 feet.

At a public hearing in November 2014, an attorney for the Housing Authority in making the case for a maximum of four stories said “several units have lofts which affect the number of stories, but does not affect the building height, the visibility or anything physically regarding the architecture,” according to the town’s minutes from that meeting.

A handful of neighbors at that hearing expressed concerns about higher buildings as well as aesthetics, with one woman asking “if some articulation could be given to the appearance of the buildings so they are not so monolithic.”

Two months later, in January 2015, the project was presented again to P&Z, though as a less dense development—the total unit count came down from 88 to 73. Though P&Z Secretary Jean Grzelecki “expressed a concern that Building 1 [the one in question] will be too large,” an architect on the project “assured her that the visual impact of the building will not be as strong as she might think it will be,” according to meeting minutes.

Ultimately the commission unanimously approved it, noting in part of its resolution that the applicant “made renovations to the building’s architecture to address concerns of the commission and the public which will result in a project that is in keeping with the high architectural standards of the town.”

The four-story buildings themselves are about 48 feet high, according to David R. McCarthy of Jonathan Rose Companies, a Stamford-based firm that’s working in a construction manager capacity with the New Canaan Housing Authority on the Millport redevelopment.

A comprehensive landscaping plan for the site includes 10 Serbian spruce trees that will be eight to 10 feet high when planted and will grow to 50 to 60 feet high when mature, he said. Additionally, about 21 shrubs called ‘viburnums,’ each about three feet high, will be planted along Millport Avenue as part of the plan.

Hobbs said of the building that although “there’s no question now with white Tyvek on the side and a huge uninterrupted wall, it is quite jarring,” still “there are stonework, balconies and trim that will all soften the structure.”

In addition to providing much-needed housing for working people who could not otherwise make rental or mortgage payments here, the development is expected to trigger temporary relief for New Canaan from a state law that often amounts to a loophole for developers seeking to skirt local planning decisions.

Under the Affordable Housing Appeals Act, towns where less than 10 percent of the housing stock qualifies as “affordable” by the state’s definition (New Canaan’s is at about 2.4 percent), developers may bypass Planning & Zoning by designating a percentage of units within proposed new structures as affordable.

Ten percent is a rigorous standard that towns such as New Canaan are unlikely to meet, officials say, since the state in calculating “affordable” lumps the town into the sprawling geography of the “Norwalk-Stamford Metropolitan area.”

Yet there’s a way to get relief under a provision (a complicated provision) in the state law. Under the provision, types of housing are assigned a certain number of points based on variables such as how much they cost (in mortgage payments or rent) and who they serve (seniors or families). If a town amasses enough “housing unit equivalent” points, it can earn a four-year exemption.

The 33 units going up now are expected to trigger than exemption.

It’s an important standard for New Canaan to meet in order to avoid seeing unwanted projects shoehorned into available lots.

Many New Canaanites will recall that a developer had threatened to leverage the Affordable Housing Appeals Act, sometimes called ‘8-30g’ for its specific statute number, in order to develop at Jelliff Mill. In that case, the town ended up approving the development in exchange for $200,000 paid into its fund for creating affordable units.

Fears that the law would be invoked resurfaced when the Roger Sherman Inn hit the market for $6 million two years ago, and for many those fears remain.

Hobbs said: “As we work toward our 8-30g moratorium, we need to take advantage—maximum advantage—of any land that is available for affordable housing. Even in private economics, we really are getting driven toward larger buildings, but certainly on the affordable side, it just has to: The land in New Canaan is just too expensive if we want to get our moratoriums.”