The following letters of appreciation for New Canaan Police Department officers were made public during the Oct. 17 meeting of the Police Commission, by Chief Leon Krolikowski. 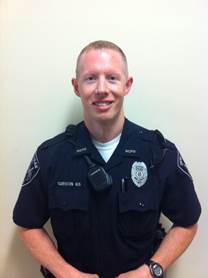 “On Tuesday Oct. 02, 2018, the National Weather Service confirmed that an EF1 Tornado touched down in New Canaan and last from 1729 to 1941 hours. The tornado brought winds reaching speeds of 100 mph. The path fo the tornado was nearly four miles and 100 yards wide. The National Weather Service stated that the tornado began near the intersection of Weed St and Marshall Ridge Rd and traveled southeast for approximately four miles. The strong winds knocked down trees, branches and utility lines. The storm also brought heavy rain. The National Weather Service reported 3.95 inches of rain which was the highest in the state. Both travel lanes of the Merritt Parkway were closed between exits 37 and 38 due to downed trees and debris. This significantly increased the volume of traffic on the New Canaan roadways.

“As a result of this severe weather the Police Department received an immediate heady call volume on both 911 and the main number. Dispatcher Officer [Shane] Gibson should be commended for prioritizing the incoming calls in a timely and professional manner. He was able to dispatch the patrol units to the affected areas giving pertinent information for each call. Officer Gibson reminded units to use caution several different times especially when there were wires reported to be involved. Officer Gibson started a list of road closures and constantly updated the list. Officer Gibson was in contact construct with the New Canaan Highway Department and Eversource. 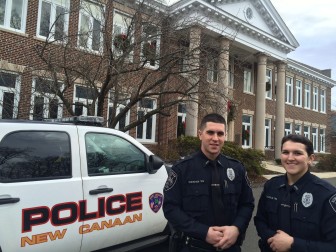 “The shift responded to more than 32 Hazard calls after the onset of the storm. Roads were clearly marked with flares, caution tape and barricades to ensure the safety of traffic and the citizens of the town of New Canaan. On one particular incident a vehicle had driven over a power line and the vehicle dragged the power line. It could not be determined if the power line was energized or not. Officer [Chris] Dewey and Officer [Nicole] Vartuli made certain that the operator of the vehicle did not exit the vehicle, and they waited on scene until the arrival of Eversource.

Officers Dewey, Gibson, [Will] Sheehan, Vartulli and [Robert] Rizzitelli all performed their duties in an exemplary manner! On 10/03/2018 I received a voicemail from an individual who was ‘stranded’ on the roads of New Canaan. The caller stated ‘I don’t get scared easily, but I felt like a rat trapped in a cage. Every time I turned around there was wires down.’ The caller went on to say that an officer provided assistance by giving directions back to the parkway. The gentleman could not speak highly enough about the professionalism of the Police Department and this Officer in particular.

“This was a true team effort and your actions are commended.”

“Rex Sprosta is one of the best officers I know who cares about what he does and takes time to listen to your issue. He does his job 100% to the fullest.” 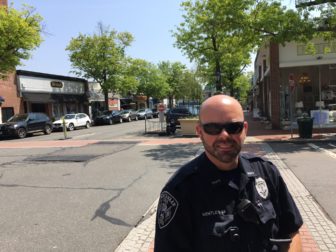 “Several weeks ago, we asked Connecticut police chiefs throughout the state to nominate officers or community leaders who embody the best of community policing. It is my great pleasure to congratulate you as you have been selected to receive an award for distinguishing yourself through exemplary contributions to strengthening the relationship between the police and the community you serve.”

One thought on “‘A True Team Effort’: Letters of Appreciation for New Canaan Police Officers”