Prior to moving to the United States from her native Scotland 11 years ago, Morag Grassie had been deeply immersed in her career as a scientific researcher. 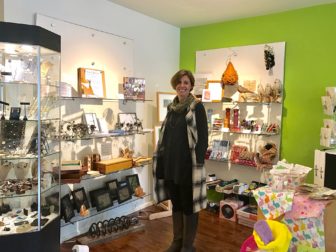 Ally Bally Bee owner Morag Grassie at her Ridgefield shop. She’s opening a store this month in New Canaan. Published with permission from its owner

After earning a bachelor’s degree in molecular biology from Glasgow University and doctorate degree at the Institute of Virology, a government agency, she worked as a research fellow and professor, then spent eight years in psychiatric drug development and finally in human genome DNA research, leading one company’s large pharmacological department.

The family moved here (they’re now in Redding, kids aged 21, 19 and 15) for the sake of her husband’s career and “I left my other life,” Grassie recalled on a recent afternoon. 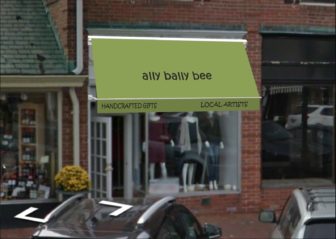 Unable after just a few years out of her field to re-penetrate the job market in the United States at a hard-won, accustomed level, Grassie decided “I’m doing something different,” she recalled, “and I started to look for a property to do this business idea that had been incubating for quite a while.”

Born of her own penchant for working with textiles—Grassie had started making items such as purses, and partly out of boredom been working with an interior designer, reupholstering furniture—she thought about “how great to have your perfect craft show open in bricks and mortar, year-round.” 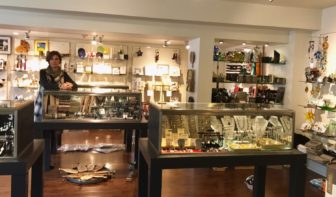 Ally Bally Bee owner Morag Grassie at her Ridgefield shop. Published with permission from its owner

Welcome to Ally-Bally-Bee, a handcrafted gift store that’s operated in Ridgefield for five years and is scheduled to open March 30 on Elm Street in New Canaan.

A co-op model shop that features an approximately even split between the works of dozens of local artists and handcrafted items selected by Grassie at shows throughout the United States (and beyond)—Ally-Bally-Bee is named for a Scottish nursery rhyme that includes a line about “sittin’ on yer mammy’s knee.” For Grassie, who had felt at the point she was ready to name the new business that she’d been losing her connection to Scotland, the name also made great sense because “so many artists learn from their mothers.”

Ally-Bally-Bee is a nice fit for New Canaan (she’s keeping the Ridgefield location, too), she said, because “it’s such a community-based town that wants to support local businesses and artists.”

“We are a destination store and I always think of New Canaan as a great destination location for shopping. It’s a destination for people to come and shop and look for something a little bit different—that is exactly what our store is, small, unique and different. And then also one of the reasons I am limited here [in Ridgefield] is because we are not part of a downtown area, deep in the community. We have created our own community of artists and really loyal customers, but it’s hard to continue it when you cannot be part of neighborhood stores because we are not on Ridgefield’s main street but on Route 7.”

Grassie is joining the New Canaan Chamber of Commerce, she said. The organization’s executive director, Tucker Murphy, said she was “thrilled to have met the owners.”

“They are very excited to open their doors in New Canaan,” Murphy said.

The new space “fits us very well,” Grassie said. “The location of it and the actual layout of the store is great because we can display as many artists as possible.”

They’ll need the space, as Ally-Bally-Bee offers a wide-ranging and continuously changing lineup of goods. Asked for a snapshot of what currently was on offer in Ridgefield, she said wild horse photography, a number of bath and body products including one from a bee farm and a local guy who uses byproducts from an organic butcher to make soaps and body butters, multiple stationers, including one from a vintage letter press from the 1850s, another with watercolors, handmade dog treats, kitchen products, dog leashes and collars, hand-dyed silk scarves, purses, belts buckles, yarn scarves, brass belts, glass pumpkins, mugs, ceramic bowls, salad servers, fused glass art, kitchen linens, hand-printed kitchen towels, candles, baby goods (blankets, clothing, toys, hair clips) and a jewelry from various jewelers.

Because she’s been embedded in the artists’ community for a number of years now—some 250 artists have been licensed to sell through the Ridgefield shop since it opened five years ago—Grassie said many of those whose work she agrees to sell come by word-of-mouth. The artists, about 60 at a time, are part of the co-op and have their own small dedicated space in the store. Ally-Bally-Bee merchandises their goods and collect a small fee and commission from the artists, “which helps with some overhead,” Grassie said.

Some co-op artists have larger licenses and Ally-Bally-Bee also sells some items on consignment.

Grassie is very active on social media (here she is on Facebook, Instagram, Pinterest and Twitter) and though she hasn’t started actively looking in New Canaan itself for co-op artists, a notice likely will go up in the window soon.

Asked how science figures in her life today, Grassie said it’s been “ a really interesting dilemma” for her. She’s tried at various points to “dabble a little bit in science,” but has found that “if you are in science, I describe at as a going into a black hole—I love talking science and getting involved, but I can’t do it a few hours a week. I need to eat, sleep, live and breathe it.” Asked whether that’s part of her personality or just the demands of the field at the level she had gone to, Grassie said, “It’s probably my personality.”

She added: “But I think you don’t succeed in that field unless you have it.”

And now her focus is on the shop, and the soon-to-launch New Canaan location specifically.

“The Ridgefield store is about creating a community and I see success measured in smiles, as long as we break even,” Grassie said. “It [the New Canaan space] is a little more expensive to rent, but I think philosophy should be the same—that I am in a fortunate position to do something that makes others happy. You can have a miserable day and come in to be cheered up. Every product in our store has a story behind it. My goal is to try and do that in New Canaan.”

[Editor’s Note: The headline and article have been updated to reflect a planned opening date of March 30, not March 13 as originally reported.]

One thought on “‘Ally-Bally-Bee’: Handcrafted Gift Store To Open This Month on Elm Street”