After five more black bear sightings in New Canaan since last Wednesday, the head of Animal Control is urging residents to be vigilant and for those with bird feeders to consider installing electrified fences around them. 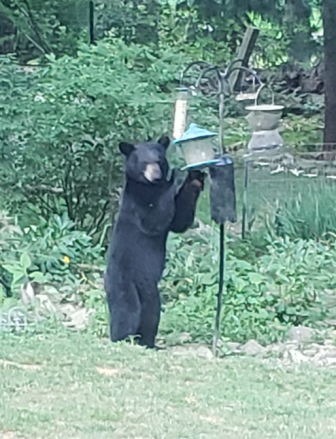 “Some people are using the word ‘cub,’ but I don’t want to go there,” Halm told NewCanaanite.com.

June and July both saw a rise in bear sightings, Halm said, and she’s already received one more since Friday.

“We are consistently hearing about bears,” she said.

The sightings have been reported from all over town, from Charter Oak Drive near the Darien line, to Silvermine near Norwalk and up along the New York state border, Halm said.

“I just think they are taking up residence along [town] borders the way the sighting is going, using a big territory,” she said. “They’re near reservoirs, a lot of wooded and open spaces, and bird feeders are being destroyed for sure.”

The bears are being seen at all hours, though many times the animals appear to be out and about from about 4 to 6 p.m., she said.

Bear sightings may be reported through this page to the Connecticut Department of Energy and Environmental Protection.

Black bear activity in New Canaan picked up this year in May.

The animals typically bred in late June or early July, according to DEEP. During that time, males travel extensively in search of females. They eat grasses, forbs, fruits, nuts and berries, and also will seek insects—particularly ants and bees—scavenge carrion, and raid bird feeders and garbage cans. Bears occasionally will prey on small mammals, deer and livestock, state officials say.