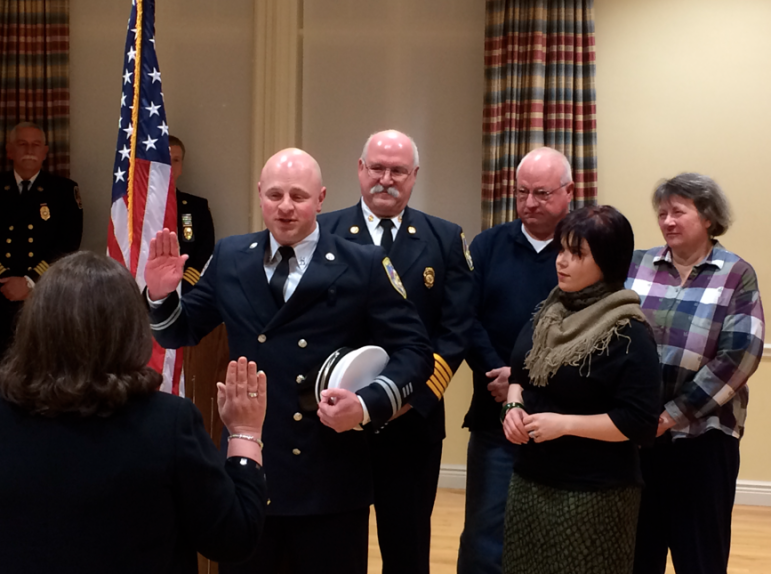 "This is us right here. Everybody is here, we have our families here, volunteer and paid staff working together. That’s what this department is about. I grew up in Bridgeport and came to New Canaan—and that in itself is a success story, quite frankly—but they gave me the opportunity. They hired me when I was 22, and you still don’t know anything when you’re 22. My captain at the time, Angelo Gesualdi, who unfortunately wasn’t able to make it tonight, he basically took me basically from a child and turned me into the firefighter and person that I am now. He managed to push and push me, and after being in the department eight years, I made lieutenant. Then I got 14 years on and I’m captain. These guys here, they work with you and you know you’re not alone. We’re a family and I cannot say enough good things about them." — New Canaan Fire Capt. Michael Baker at his Jan. 13, 2015 swearing-in ceremony at Lapham Community Center following a promotion from lieutenant. Here is Town Clerk Claudia Weber swearing him in while his wife Heather Trocola looks on, as well as parents Gary and Janet Baker, and New Canaan Fire Chief Jack Hennessey. Credit: Michael Dinan 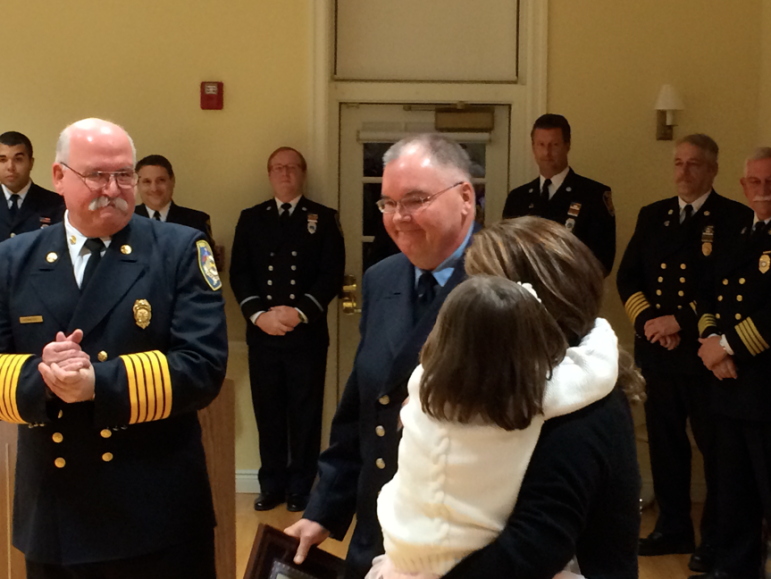 Firefighter Jim Pickering, center, was honored during a Jan. 13, 2015 ceremony at Lapham Community Center. Fire Chief Jack Hennessey is pictured at left, with Pickering's family in the foreground. Part of the Fire Commission citation for Pickering reads: "Since 2012, Firefighter James Pickering has dedicated time and effort to obtaining hundreds of carbon monoxide and smoke detectors for residents of the town of New Canaan. We know that smoke detectors save lives. The same is true for carbon monoxide detectors. The mission of the fire service is to protect life and property from fire—these detectors do just that. Through Jim's tireless efforts, hundreds of homes now have these new life safety devices installed at no cost to the homeowner, increasing the home safety of hundreds of our residents." Credit: Michael Dinan

"The guys have been helping me fit in. I learned a lot at the academy, but in the short five months that I’ve been here, I’ve learned twice as much. There’s a lot of great leadership. I feel that I’ve gained 23 brothers."—New Canaan Firefighter Damien Sheerin at his swearing-in the ceremony, held Jan. 13, 2015 at Lapham Community Center. Here's Town Clerk Claudia Weber swearing in Sheerin while Fire Chief Jack Hennessey looks on and his wife Gillian holds daughter Lylah nearby. The Sheerins' baby son Dylan also was in attendance in the Douglas Room. Credit: Michael Dinan

Deputy Fire Marshall Bill Dingee (right) was honored for 21 years of service in his position, during a Jan. 13, 2015 ceremony at Lapham Community Center. Here he is with Fire Chief Jack Hennessey (left) and Fire Marshal Fred Baker. “We want to thank him for his service,” Baker said. Dingee’s plaque reads, in part: “Presented to William R. Dingee in recognition and appreciation for your 21 years of dedicated service as deputy fire marshal in the town of New Canaan.” Credit: Michael Dinan

"Coming from St. Louis to the East Coast, I expected everyone to have an attitude and be kind of jerky. The New Canaan Fire Department is full of the nicest, most welcoming people I’ve ever met. I almost feel bad, because in St. Louis we wouldn’t treat our new guys half as well as they’ve treated me." — New Canaan Firefighter Brian Doane at his Jan. 13, 2015 swearing-in ceremony at Lapham Community Center. Here is Town Clerk Claudia Weber swearing him in while his wife Jennifer and son Trevor look on, with Fire Chief Jack Hennessey standing behind the family. Credit: Michael Dinan

"New Canaan has a really strong community that gets together and what is amazing about this fire department is it’s a combination department. We’ve got members of the community that work outside of New Canaan, work in the city and come back on their off-hours and dedicate time back to the community through the fire service. It’s a really well-run combination department, we have a career staff and the volunteer organization and it all works together. And as you can see from tonight, we have a big showing from the entire department for the new hires and the commendations and it’s really nice to see everybody coming together for a great event." — Lt. Duffy Sasser, during his Jan. 13, 2015 swearing-in ceremony as lieutenant, at Lapham Community Center. Here is Town Clerk Claudia Weber swearing him in while his wife Caroline, daughter Emily and son Colin look on. Fire Chief Jack Hennessey is standing behind the family. Credit: Michael Dinan 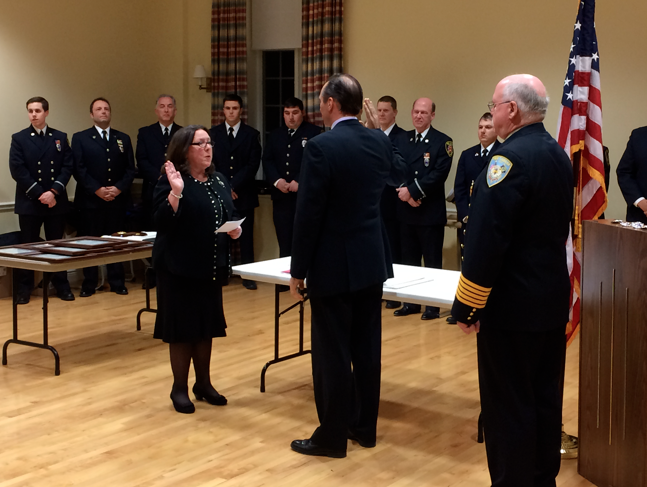 “Tonight means a lot to me because it’s something I’ve worked very hard to get, to be a career firefighter,” Damien Sheerin said after he’d been sworn in. “Tonight feels a little surreal, that all my hard work has paid off, to be a firefighter officially in New Canaan, Connecticut.”

See the photos and captions in the slideshow above for quotes and information about each honoree.

The ceremony was led by Fire Commissioner Jack Horner. Town officials in attendance included Selectman Beth Jones and Emergency Management Director Mike Handler. The department also honored firefighters who helped save the life of 18-year-old Michael Bivona, Jr., who had to be extricated from his car following a head-on accident Oct. 30 on Silvermine Road. That citation is included in a separate, dedicated article.