A New Canaan woman involved in the Oct. 30 four-car crash on Silvermine Road that saw a Stamford teen hospitalized with severe injuries (see below) may have caused the collision by rear-ending the vehicle in front of her, according to one motorist’s testimony cited in a preliminary police report. 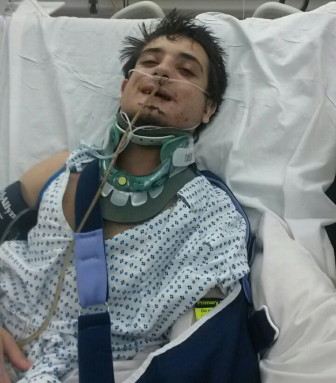 Michael Bivona, Jr. in the hospital following the Oct. 30, 2014 head-on crash on Silvermine Road. A preliminary police report of the accident indicates that a New Canaan woman traveling at excessively high speed caused the crash by rear-ending the vehicle in front of her. Contributed

The 50-year-old woman, traveling westbound in a 2010 Chevrolet, sped from behind into a 2013 BMW that had been traveling at 30 mph, according to the BMW driver, the report said. That rear-ending sent the BMW into a head-on crash with the Stamford teen, according to the report, cited by an attorney for the victim’s family.

“There are still a lot of questions to be answered,” said the attorney, John Parese of New Haven-based Buckley & Wynne. “Was someone intoxicated? How fast was she [the New Canaan woman] going?” 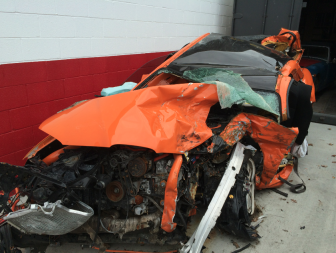 The front driver’s side of Michael Bivona Jr.’s Subaru, pictured here, was struck Oct. 30 by a BMW whose operator said he was traveling westbound on Silvermine Road at the 30 mph speed limit when a car struck him from behind—a vehicle operated by a 50-year-old New Canaan woman—sending him careening into Bivona. Here is Bivona’s car after the crash. Contributed

The Stamford teen, 18-year-old Michael Bivona, Jr.—a 2014 graduate Brien McMahon High School who works at a Stamford auto body shop and in construction, according to his father, Michael Bivona, Sr.—suffered the following injuries in the accident: torn ligaments in his ankles, broken femur, seven broken ribs, broken collarbone, broken elbow, stretched ligaments in his neck, lacerated liver, damaged spleen and punctured lung. He got out of the hospital about one month ago.

Driving a 2003 Subaru, Michael Bivona Jr. had been on his way to Wilton to visit an uncle when the westbound vehicles struck him head-on, according to his father. 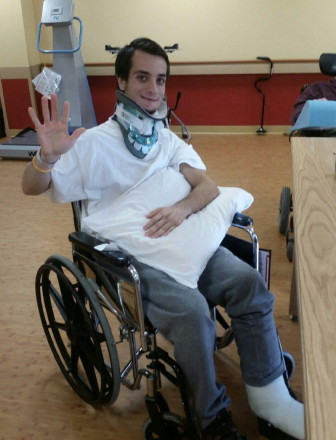 Asked how eager he is to get the full police accident report, Michael Bivona, Sr. said: “We are very eager to find out the truth of the whole matter, and we may never know, but we at least want to get some kind of information.”

New Canaan Police Chief Leon Krolikowski said the full report could be completed in late-January or early-February, and that it will include the speed and level of toxicity of the motorists.

Asked how central to the investigation are the whereabouts of those involved in the accident—and particularly the New Canaan woman’s–immediately prior to the collision, Krolikowski said: “It is a critical part of it, but it’s also just one part.” 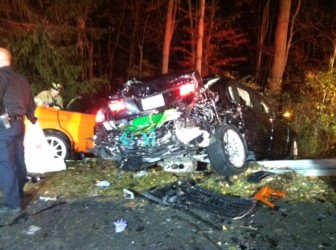 One motor vehicle involved in the 4-car accident on Silvermine Road in New Canaan on the evening of Oct. 30, 2014.

“We do an exhaustive investigation which takes longer than some agencies,” Krolikowski said. The investigation includes downloading all data from each car’s recorder, interviewing all of those involved, obtaining a search warrant for medical records “to determine if there were any substances that may have affected any of the drivers” and then, if there are grounds for it, to consult with a prosecutor and find out whether there’s a need to apply for a search warrant.

Asked whether there appeared to be a need to do that, Krolikowski said: “We are not 100 percent but we are looking at some behavior we believe may be criminal in a motor vehicle sense.” 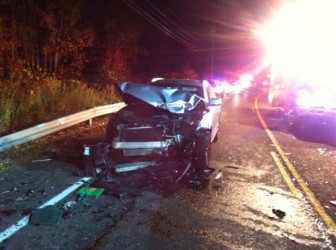 A vehicle involved in the 4-car accident on Silvermine Road in New Canaan on Oct. 30, 2014.

The fourth motorist involved in the accident is a 41-year-old Wilton woman had been traveling behind Michael Bivona, jr. in a 2011 Audi SUV, police have said. None of the motorists had passengers, and all were wearing seatbelts, police have said.

According to the preliminary accident report, the New Canaan woman was able to crawl out of her car after the accident, while the BMW driver climbed out of his car through a broken rear window and then lay in the roadway in severe pain, while the Wilton woman reported afterwards that her head hurt.

Parese said the full accident report is needed in order to file a civil lawsuit. He has up to two years following the accident in which to file, officials say.