An area mom originally from Europe is planning to open a children’s clothing shop on Elm Street that features German lines serving newborns to 12-year-olds. 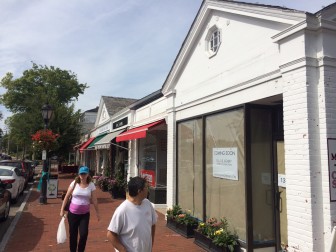 Christine Eisenbeiss called the offerings at Ella & Henry at 137 Elm St.—anchored by clothing from Giengen, Germany-based Steiff—“high quality” and “functional.”

“Steiff has been very famous in the United States for teddy bears, but in Germany, in Europe, they have been making children’s clothing from quite some time and they’re very successful,” Eisenbeiss, a Germany native who moved to the states in the last few years and resides with her family in Port Chester, N.Y., told NewCanaanite.com.

The price of the clothes is a middle range between Ralph Lauren and Gap, she said.

If its initial shipment of merchandise clears customs as expected, Ella & Henry—so named after Eisenbeiss’s niece and son—will open this coming Saturday, Oct. 3, she said. Other brands to be sold at Ella & Henry include Papermoon and Bellybutton, she said. According to the shop’s newly launched website, the companies “produce high quality lines that combine fashion and tradition as well as functionality.”
“Clothing in which children can be children,” the Ella & Henry website says.

Eisenbeiss said she had been looking at retail space in Greenwich as well as New Canaan, and settled on the “Next Station to Heaven” after the location at 137 Elm opened up. The space had been occupied by Sara Campbell, which earlier this year moved a few doors up into the former Jack Spade shop.

In bringing a children’s clothing store to upper Elm, Eisenbeiss steps into a market that in the past year-plus has seen a pair of longstanding businesses close: Littlejohn’s across Elm Street closed last summer after 24 years in business and Ralph Lauren Kids shut down last month.

Asked for her thoughts on the Ella & Henry launch, Laura Budd of the New Canaan Chamber of Commerce said the organization is “very pleased to see that the storefront was not empty for long.”

“We know the town can support more than one children’s clothing retailer, and we think they will make a nice complement to that area,” Budd said. “We look forward to working with them.”