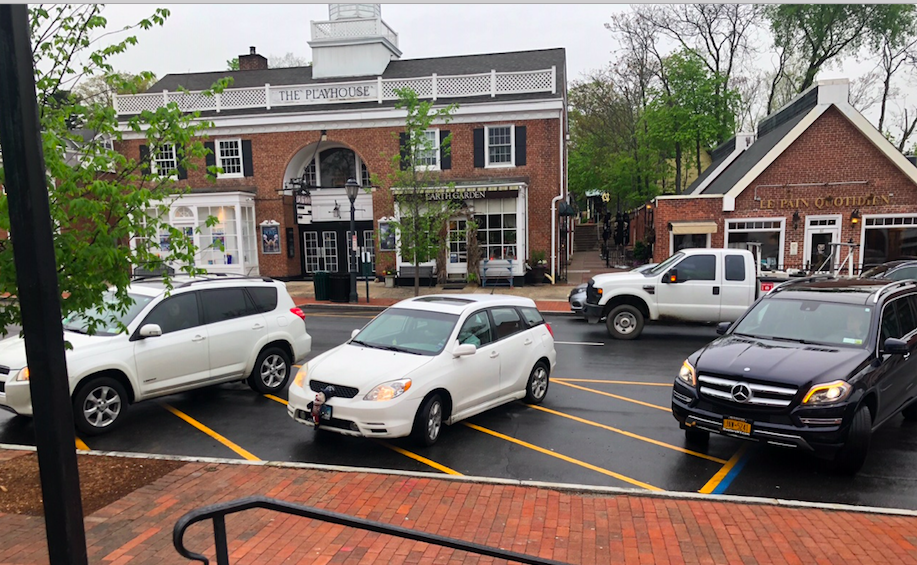 The Parking Commission as part of its 3-2 vote at the May 2 meeting also is recommending that the spaces running along the northern edge of Morse Court, which now offer free 15-minute parking, also be metered.

“By giving away free parking on the main streets, we create a perverse incentive for people to not use parking in the peripheral lots that are designed to take the load off [Elm and Main Streets],” Commissioner Chris Hering said at the meeting, held in Town Hall.

Hering voted in favor of the change, along with Commissioners Stuart Stringfellow and Peter Ogilvie (who long advocacy for this idea was recorded in a recent 0684-Radi0 podcast). Chairman Keith Richey and Commissioner Pam Crum voted against the recommendation. The matter now moves to the Police Commission, New Canaan’s on-street traffic authority, under state law.

Town officials have wrestled for years with the idea of reversing the way parking now works in New Canaan’s business district, where motorists may park for free in the most coveted areas but must pay for spaces further out.

Richey said that other area towns have the same model and “they seem to work very well,” and that it’s a bad idea to change what is now a “welcoming thing for our town.” While it’s “illogical” to have “your choicest” spaces free, the “political reality is that it’s never going to happen,” Richey said.

“I known from wasting time on things that never happen,” he said.

The matter arose during the Commission’s meeting during a separate discussion about chalking tires on cars.

Ogilvie said, “Get rid of chalking, and move on to the more logical thing, which is charging for parking in our most valuable spaces. And then you won’t have any legal arguments. And furthermore, there shouldn’t be any complaints about leniency.”

He referred to appeals made by motorists who had been ticketed in Morse Court for overstaying in the 15-minute spaces. Some of those fighting their tickets called for a “grace period” after the time had expired.

Advocates for making the change also said it would generate more revenue for New Canaan, that towns such as Greenwich have meters on their main drags and that installing them on Main and Elm Streets could be the most effective way to prevent those working in stores and restaurants downtown from taking up free spaces designed to serve shoppers and diners.

Opponents said the downside to doing so includes that the northern side of Elm Street would lose some spaces, because the new metered spots would have to be lined out to accommodate large SUvs, and that there would be a cost involved in installing meters. While the “iron mike” machines that serve off-street lots in New Canaan cost about $8,000 apiece, the parking manager said, it wasn’t immediately known what it would cost to purchase and install a series of meters—serving, say, two or more spaces each—to charge motorists in the center of town.

Crum acknowledged that charging for parking on Main and Elm would solve the problem of employees taking up free spaces, but said one major question remains how making the change would affect merchants.

The Police Commission is scheduled to meet at 6 p.m. Wednesday.

Here’s the podcast with Ogilvie: