Something must’ve happened out front of the 1850-built commercial building on the corner of Main Street and East Avenue, home to a gift shop, swimwear store and tailor. 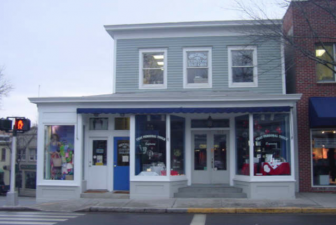 Now that we’re in budget season, here’s a look at what the highest elected official is paid in New Canaan and nearby towns:

Sources: Human Resources Departments
*The position of first selectman in Wilton has been approved for a $139,511 annual salary following a 2.5 percent increase, but First Selectman Lynne Vanderslice did not support that increase and has declined to accept the additional salary. 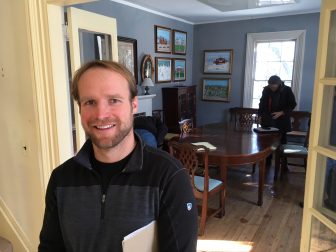 Tom Sturges in the Town House at the New Canaan Historical Society, where his great-grandmother Imogene Seymour lived and worked as curator in the 1950s and ’60s. Credit: Michael Dinan

The developer who earned high praise recently from historic preservationists for his design of a new house on Forest Street said throughout the process that it was important to him to be respectful of the neighborhood’s history. In fact, Tom Sturges is the great-grandson of Imogene Seymour, who had been curator for the New Canaan Historical Society from 1959 to 1968. She lived at the Historical Society’s well-known Town House while working in that position, according to Sturges. Seymour, who died in 1968, “absoultely loved the history of New Canaan,” Sturges said.

Police Commission Chairman Stuart Sawabini is stepping down from the group, and the Board of Selectmen appointed Jim McLaughlin to it for a three-year term ending Dec. 1, 2020. 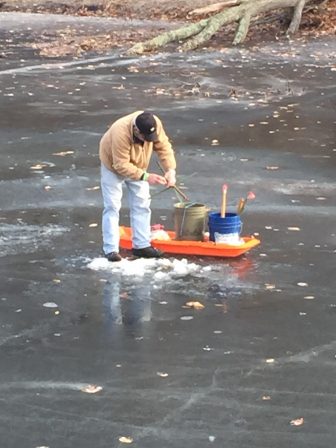 It’s been sufficiently cold in New Canaan in recent weeks to freeze Mead Pond for ice skating for a period of time, and for the man in this photo to try his hand at ice-fishing on Mill Pond.

Asked for his opinion on who should fill the Town Council seat recently vacated by Republican Ken Campbell, First Selectman Kevin Moynihan told NewCanaanite.com during a press briefing Thursday that in his personal view, “it’s a Republican seat and it should be filled with a Republican, and the Democrats would feel the same way if it was a Democratic seat.” 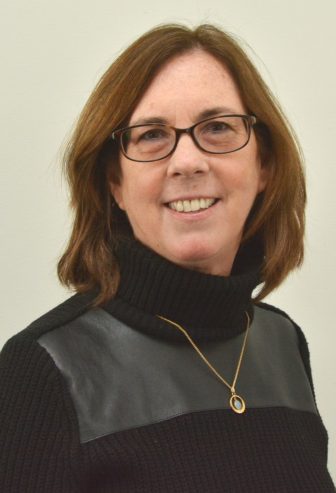 Congratulations to Darien resident Ellen Bay, who has joined Bankwell as Vice President, Market Manager for Darien, where Bankwell will open one of three new branches this spring. Ellen comes to Bankwell following nearly eight years at Darien Rowayton Bank, where she was most recently branch manager.

She graduated from Vanderbilt University with a degree in Business Administration.

The selectmen on Tuesday appointed and reappointed the following residents to boards and commissions: 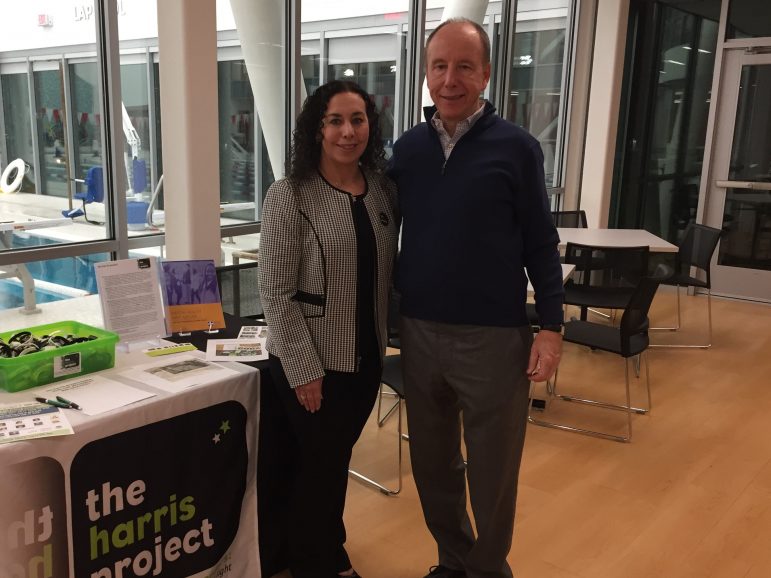 [Photo: Stephanie Marquesano. Founder & President, the harris project and Paul Reinhardt, Founder, New Canaan Parent Support Group.] The New Canaan Parent Support Group and the New Canaan YMCA have banded together to host the Monthly Pathway Series. The first session was held on January 17th in the Wagner Room of the New Canaan Y. The goal of the Pathway Series is to address addiction- and mental health-related topics in an open community forum. “These sessions represent our response to positive feedback generated from the support group’s Overdose Awareness Vigil last year. My hope is that the series will educate all on paths to substance misuse, and the hopeful pathways to recovery and long-term wellness,” said Paul Reinhardt, Founder--New Canaan Parent Support Group. The topic of the January session was Co-occurring Disorders (COD), which is the combination of a mental health disorder with substance misuse. Stephanie Marquesano, Founder & President of the harris project, discussed the need to address COD, especially among young people. Approximately 10.2 million Americans meet the diagnostic criteria each year. In addition, it is estimated that 22% of teens have a mental health disorder in any given year. Marquesano, a resident of Ardsley, NY, is a certified instructor in Youth Mental Health First Aid (YMHFA). She returned to New Canaan on Saturday, January 20th, teaching the first segment of a two-part YMHFA Training at St. Mark’s Episcopal Church. Stephanie, like Paul, has experienced the profound grief of losing a son to overdose. Her advocacy work is “for me, an opportunity to celebrate a life lost way too soon,” she said. The next session of the Pathway Series will take place on Tuesday, February 13th at 7PM. The featured speaker will be John Hamilton, LMFT, LADC, Mountainside. The topic of the February session is “Opioids Today, Benzos Tomorrow”. For more information regarding the monthly Pathway Series, contact Paul Reinhardt at preinhar99@gmail.com. 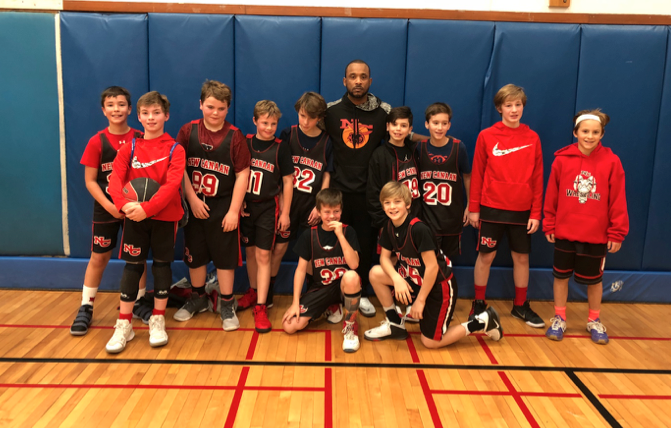 [L-R, top: Simon Tchakarov, Brandon Krongard, Chip Furman, Stephen Brown, Brenden Wells, Coach Felix Belgrove, Drew DeGaetano, Brooks Wunderlich, Hudson Kenny, James Towers. Botttom: Liam McDevitt and Michael Smith.] 5th Grade Boys Red Basketball 3-0 Weekend New Canaan’s 5th Grade Red Team, well coached by Felix Belgrove, continued to add to its winning total this weekend with three victories. Friday night the team traveled to Weston to bring home a 42-13 win. The offense lead by James Towers, Hudson Kenny, Brooks Wunderlich wracked up points with solid contributions from Stephen Brown, Drew DeGaetano, Michael Smith, and Liam McDevitt. James Towers led the team with 14 points. Chip Furman with 12. On defense Brandon Krongard, Hudson Kenny and Simon Tchakarov kept opposition players out of the paint and rebounded with efficiency to seal the wins. Brendon Wells lead the team with 9 rebounds and 7 steals. Brandon Krongard turned the ball over 5 times to ensure a win for New Canaan. Saturday 5th Boys Red came together again to defeat the Greenwich Boys & Girls Club decisively 51-23. Brooks Wunderlich kept the ball in New Canaan’s hands with five steals and four turnovers. Simon Tchakarov was the high scorer with 15 points…and yes he sunk three, three pointers. I repeat 3-3’s. James Towers with 10, Drew DeGaetano with his best game yet with 8 points. Stephen Brown, Brandon Krongard, Hudson Kenny, Brendon Wells, and Liam McDevitt also got points on the board. Chip Furman lead the team in rebounds and Michael Smith with assists. It was a true team effort led by Coach Felix! Sunday the boys do it again beating Darien 45-17. James Towers scored the team’s first 9 points as NC raced to a 9-2 lead after just 3 minutes of play. Towers was high scorer and ended with 19 points. 5BR team again made 3 3-pointers – James Towers, Simon Tchakarov and Brandon Krongard each had 1. Stephen Brown had one of his best games with 8 points and every player had at least 1 basket. Hudson Kenny lead the team for rebounds. Defense was stifling all game and had Darien behind 25+ points throughout the 2nd half. 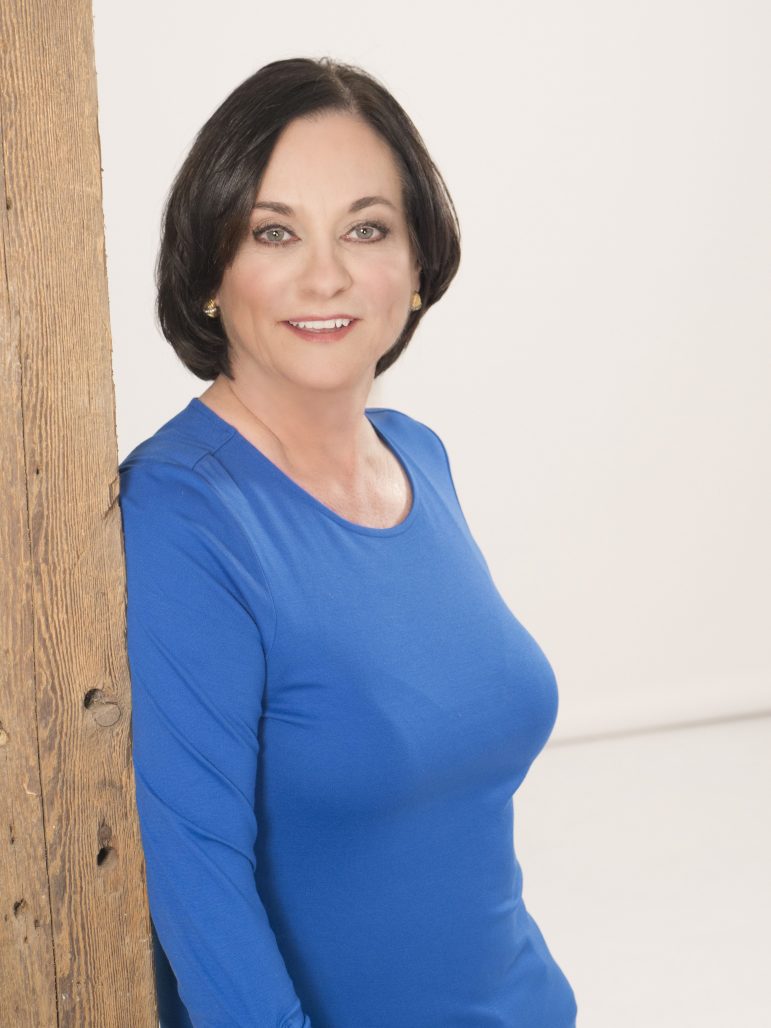 Administrator Linda McMahon of the U.S. Small Business Administration (SBA) announced the appointment of Kathleen McShane as the head of the SBA’s Office of Women’s Business Ownership (OWBO). McShane will serve as the Assistant Administrator for OWBO. In this capacity she will oversee the agency’s efforts to promote the growth of women-owned businesses. The SBA offers advocacy and programs that provide business training and counseling, access to credit and capital, and multiple business and networking opportunities. “It is a pleasure to welcome Kathy to the SBA’s team of talented leadership who are committed to the development of small businesses across the nation,” McMahon said. “Her business acumen, accomplishments and private sector experience are a great fit for the SBA’s programs and resources that help to create more opportunities for women-owned small businesses to succeed, create jobs and drive economic growth. Her background as a small business owner and business leader will be a tremendous asset for women entrepreneurs and the small business community.” As office head, McShane will manage a nationwide network of Women’s Business Centers that provide training, counseling and mentoring to hundreds of thousands of entrepreneurs in every state and two U.S. territories. Her office will also work with representatives in every SBA district office to oversee operations of the Women’s Business Centers and to coordinate services for women entrepreneurs. McShane, an experienced business owner, created Ladies Launch Club in 2006. The company was dedicated to helping women entrepreneurs launch or expand their business. Prior to that, she ran a multimillion-dollar marketing firm, where her clients included HBO, MasterCard, Venastat, Bank of New Canaan, Citibank and JP Morgan Chase. McShane spent 17 years in the corporate sector, where she worked primarily on credit card products for the small business segment. She was also an adjunct professor at New York University, was a founding director of the Bank of New Canaan and served on the Norwalk Hospital Foundation Board. McShane holds a bachelor’s degree in Business Administration from Boston University and attended Columbia Business School’s Executive Program in Management.