The New Canaan husband and wife arrested by warrant in September on felony risk of injury charges now is facing eviction from their Briscoe Road home, court documents show. The lease ($5,500 per month) held by the couple is being terminated because of “serious nuisance” and because the conduct described through their arrests “presents an immediate and serious danger to the safety of the other tenants,” according to a complaint filed in state Superior Court by Norwalk attorney Mark Sank.

The Board of Finance during its regular meeting Tuesday re-elected Todd Lavieri as chair and Judy Neville as secretary. 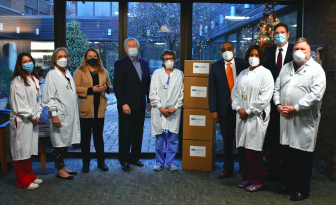 Officials on Wednesday gathered at Waveny Care Center on Farm Road as Waveny LifeCare Network accepted a donation of 1,000 N95 donated to its staff by Connecticut Biotech. Company CEO Don Vaccaro said in a statement, “We are proud to be able to help bring these much-needed supplies to facilities that need them. This is a critical time for us to come together and do what we can to get through these tough months ahead. It means a great deal to us to be able to leverage our expertise and help the dedicated front-line workers in our community.”

The New Canaan Police Department is urging residents to take precautions in making online purchases during the holidays.

Real estate agency Halstead, which has a New Canaan office, has merged with Brown Harris Stevens.

The United Methodist Church of New Canaan is holding “Holy Night,” a Christmas Pageant online at 10 a.m. on Sunday, Dec. 20.

The following parking ticket appeal was submitted to the town by a New Canaan resident issued a $30 ticket at 9:30 a.m. on Nov. 23 for parking in a loading zone on Forest Street: “I went downtown to support local diner who had no customers. Whole street open for parking at 8:45 a.m. Saw handicap parking sign and backed up to it to leave parking open for others. No notice of loading zone til 11. Tried to do right thing and leave street open.” 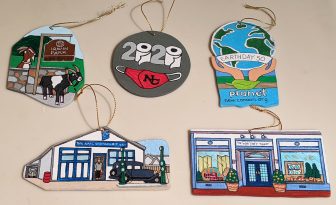 Two of the five 2020 New Canaan ornaments have sold out, “The Irwin Goats” and “COVID-19.” There are a limited number of the remaining $20 ornaments still for sale—“The Karl Chevrolet Co.,” “The Whitney Shop” and “Earth Day/Planet New Canaan”—and they can be purchased at the New Canaan Museum & Historical Society and Walter Stewart’s Market. Funds raised through sales go to the Historical Society.

The Fire Commission on Tuesday re-elected Jack Horner as chair and Kerry Smith as secretary.

The Norwalk man arrested in May for attempted murder in what authorities called a “random” assault on Valley Road, who now also faces attempt to commit first-degree sexual assault charges, has not yet pleaded. Mynor Romeo Alvarado-Canahui, who is being held on a total of $775,000 bond, is scheduled to appear Feb. 9 in state Superior Court.