Though the committee overseeing a future renovation or rebuilding of the New Canaan Police Department was scheduled to elect its chair during a regular meeting Thursday, it’s still unclear who will take that leadership role. “So many people are fighting over wanting to be chairman that I’ve got to resolve this—so we are going to punt on that until next month,” First Selectman Kevin Moynihan said during the meeting, held via videoconference. “And I will be acting chairman for the meeting today.”

Of those who objected four years ago to the use of a neighboring home on West Road as a “sober house” living facility—saying, among other things, that it would negatively affect property values— has sold his house for $1,835,000, according to a property transfer recorded Dec. 22 in the Town Clerk’s office. That’s $322,500 more than he’d paid for it in 2002, tax records show.

Police starting at 7:25 a.m. on Jan. 11 received reports that unlocked vehicles at two Logan Road homes had been illegally entered. 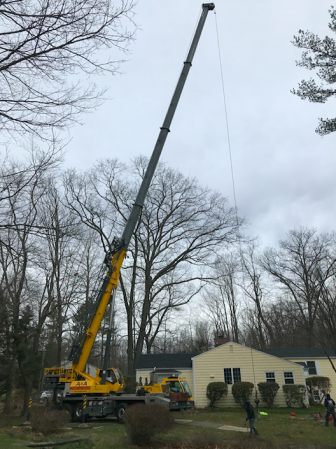 A towering crane doing tree work outside a Dabney Road home got stuck for more than one hour on Monday morning after sinking into the front yard.

New Canaan Police at about 8:43 p.m. on Jan. 11 cited a 22-year-old Norwalk man on marijuana-related offenses after stopping a car traveling southbound on Route 123 with a defective headlight.

A reminder that United Methodist Church of New Canaan is live-streaming its worship services at 10 a.m. Sunday via Facebook Live.

The medical services company facing eviction by its landlord on Cherry Street on Tuesday filed papers in state Superior Court denying several of the plaintiff’s claims, including that the tenant failed to make rent payments.

Catherine Palmer hasn’t pleaded yet to three counts of cruelty to animals following her arrest after a months-long neglect investigation showing that three puppies died at her Butler Lane home, Connecticut Judicial Branch records show. She also doesn’t have a lawyer in the criminal matter. Palmer is scheduled to appear Jan. 20 on the felony charges. A state Superior Court case in the ongoing custody dispute between Palm and the town regarding 12 seized dogs is ongoing.

Here are some upcoming events that readers uploaded to the Community Calendar:

Finally, town resident and State Rep. Tom O’Dea (R-125th) said in an email blast Monday that he will serve as Deputy House Republican Leader during the General Assembly’s 2021 legislative session.